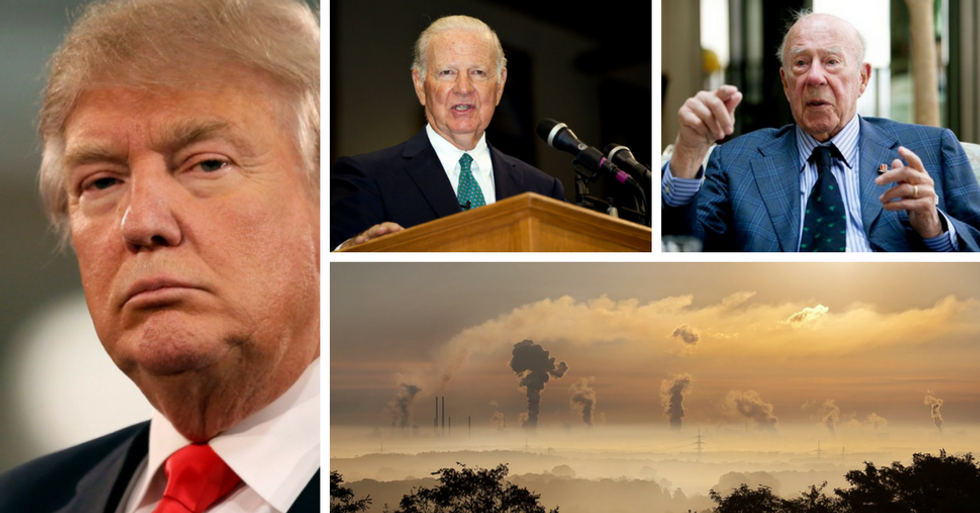 The group is led by former Secretary of State James A. Baker III, who is joined by Secretary of State George P. Schultz and former secretary of the Treasury Henry M. Paulson, Jr.  The Republican group says that taxing carbon pollution is “a conservative climate solution” based on free-market principles.

Under the proposal, nearly all of the Obama administration’s climate policies would be eliminated and replaced with a rising carbon tax. The tax would start at $40 per ton. (An issue brief from the World Resources Institute estimated that a $25 per ton carbon tax could cut emissions 20 to 30 percent below 2005 levels by 2030.)

The money raised from the tax would go back to American taxpayers via a quarterly tax from the Social Security Administration. The group estimated that the average family of four would receive about $2000 annually in dividends.

The group calls the tax conservative because it would reduce the size of government by eliminating President Obama’s climate policies. Also, revenue from the tax would go to taxpayers rather than back to government programs. They also say it is progressive, because everyone would receive the same amount, regardless of income level.

“This ticks every one of their boxes,” said Halstead. It is pro growth, pro competition, pro jobs, deregulatory, and it will help the working-class voters that Trump promised to help.”

While the group remains skeptical that climate change is primarily due to human activity, it stated that the stakes of inaction were too high. “I don’t accept the idea that it’s all man made,” said Baker. “But I do accept that the risks are sufficiently great that we need to have an insurance policy.”

Whether the Republican-led initiative will gain traction remains to be seen, though the proposal does have support from both the left and the right. A carbon tax has been embraced by leading climate scientists and advocacy groups. Al Gore has spoken out in favor of a carbon tax. Even major oil companies have come out in favor of it.

But some on the left feel that a carbon a tax alone is not enough. “Putting a price on carbon could be an important part of a comprehensive program,” said Rhea Suh, president of the Natural Resources Defense Council. “It can’t do the job alone, though, and is not a replacement for carbon limits under our current laws.” For instance, the carbon tax would not impose any regulation on methane emitted during the mining process.

Others on the left object to the money being returned to the American people, rather than funneled back into renewable energy research.

The Trump administration has also shown no signs of wanting to support climate change initiatives. Stephen Bannon, senior counselor to the president, has been outspoken in denying climate change.

The Republican-dominated Congress represents another roadblock. Last year, House Republicans unanimously supported a resolution declaring that a carbon tax “would be detrimental to American families and businesses, and is not in the best interest of the United States.” Yet even among Trump voters, 48 percent support taxing fossil fuel companies.

Regardless of what the Trump administration does with this particular proposal, it marks a significant moment for Republicans, showing that they are willing to be part of climate talks.

“What I think is interesting and salient is that it’s a whole bunch of Republicans now speaking to a Republican town. They are saying to Republicans that all the things you may be concerned about—the potential harms of a real and ambitious climate policy—they can be worked around now,” said Joseph Majkut, the director of climate science at the Niskansen Center, a libertarian think tank.

Said Baker, the proposal “gives Republicans a seat at the table on an important issue and does so in keeping with Republican principles.” But, he continued, he had “no idea” how it would be received.