“Downright Stunning” Rare Bird Photographed For The First Time, Then Killed In The Name of Science. 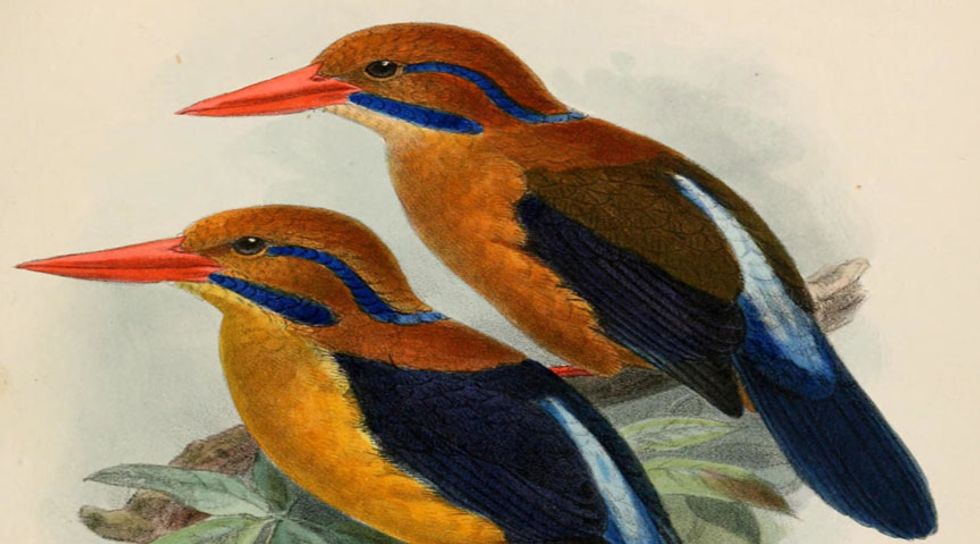 It’s not everyday that the actions of a field biologist cause public outrage.

But that’s exactly what happened to Christopher Filardi, a researcher with the American Museum of Natural History, when he killed a rare bird that had not been observed by scientists in nearly a century.

This rare bird is notoriously reclusive. It prefers a very specific and hidden habitat and is only active at dusk and dawn. Only a single female specimen had ever been observed in 1920. A male moustached kingfisher had never been studied and its habits were a mystery to scientists. The chances that anyone would ever succeed in observing and document the rare bird were slim.

In a blogpost written from the field, Filardi explained that his team’s encounter with the elusive bird required several days of work and close observation. In a remote area of Guadalcanal, his team first heard a unique birdsong, “ko-ko-ko-kokokokkokoko-kiew,” which could only come from a large forest kingfisher. When they heard the sound again, they suspected they had come upon the elusive moustached kingfisher.

“There in plain sight pumping its tail, crest alert, in full colors, was the moustached kingfisher. And then, like a ghost, it was gone.”

“Initially it was a surreal, childlike sense of a mythical beast come to life,” Filardi told Audubon.

Over the next several days they continued to hear the song of the moustached kingfisher but had difficulty locating it. The team set out a few mist nets in hopes of capturing a specimen. Then, one morning, it happened. Filardi checked on one of the nets his team set out in the forest and saw something. He gasped aloud, “Oh my god, the kingfisher.” His team had accomplished the impossible. They captured the legendary bird.

The researchers immediately took what were the first-ever photographs of the moustached kingfisher. To say that the bird is beautiful would be an understatement. Its blue and gold feathers makes it look like a work of fiction. People have described the bird as “downright stunning” and “ridiculously gorgeous.”

After taking pictures and recordings of the bird, the team did something that shocked ecologists and animal-rights activists: They killed it.

Once news of Filardi’s decision to kill the specimen was made public, most responded with outrage. Several people wrote directly to the American Museum of Natural History on Facebook and Twitter, questioning the ethics of killing such a rare bird. Some even compared Filardi’s actions to those of Walter Palmer, who famously killed Cecil the Lion.

The public outcry prompted Filardi to write a defense of his actions on Audubon entitled “Why I Collected a Moustached Kingfisher.” He explained that euthanizing specimens to study them is standard practice for field biologists and could help scientists understand the rare bird. Collecting biological samples, he claims, helps scientists understand the impacts of “marine pollutants, eggshell thinning from DDT, and anthropogenic body size shifts in widespread species.” Filardi also noted that euthanizing the bird “was neither an easy decision nor one made in the spur of the moment.” Instead, Filardi suggests that critics view the decision in the broader context of his work to protect the biological diversity of the Solomon Archipelago. “The adult male plumage of this bird has remained unknown and the absence of genetic and other comparative material linked to this plumage has precluded evolutionary analyses—until now,” Filardi writes. “Analyses of the specimen in question will

clarify evolutionary relationships among moustached kingfishers and help answer important questions about the evolution and biogeography of kingfishers, of high elevation bird communities, and of southwestern Pacific biotas more broadly.”

Filardi also claimed that while sightings of the bird were rare, the bird is not. Based on his field observations Filardi estimates that there could be more than 4,000 moustached kingfishers, which is “a robust number for a large island bird.” But even that is in dispute. The International Union for Conservation of Nature lists the moustached kingfisher as endangered. Discover reports that some scientists believe there are only 250-1,000 mature individuals remaining.

While collecting “voucher specimens” for further study and research is a common practice in the scientific community, some ecologists fear that the practice can magnify the risk of extinction for small, isolated populations like the moustached kingfisher.

In an article on Huffington Post, ecologist Marc Bekoff of the University of Colorado argues that killing “in the name of conservation” needs to stop. Instead, researchers should think about “the basic principles of compassionate conservation, namely, First do no harm and individual lives matter.”

Animal rights activists agree. PETA Senior Director Colleen O’Brien told the NY Daily News that it is nonsensical and self-serving for scientists to claim that they must kill some animals in the name of research. “To search for and find an animal of a rare species – an individual with feelings, interests, a home, and perhaps a mate – only to kill him is perverse, cruel, and the sort of act that has led to the extinction of other animals who were also viewed as ‘specimens,’” O’Brien said. “All that was needed to document this rare bird was compassion, awe, and a camera, not disregard and a death warrant.”

Filardi’s actions have spurred a broader discussion around the ethics of collecting voucher specimens of rare species. There are now over 700 responses to Filardi’s defense on the Audubon website. In response to the American National History Museum’s tweet of one of the first photographs taken of the captured bird, one user (@ThereseTravel) summarized the feeling of many: “knowledge does not justify killing a rare specimen; and is a dead body the only way to study it?”

Writer's Note: This digest adopts the English spelling of “moustached” because that was the spelling used by Filardi. The American spelling is “mustached.” Articles on the topic have used both spellings.