The Paris Climate Accords: A Break Through or a Break Down? 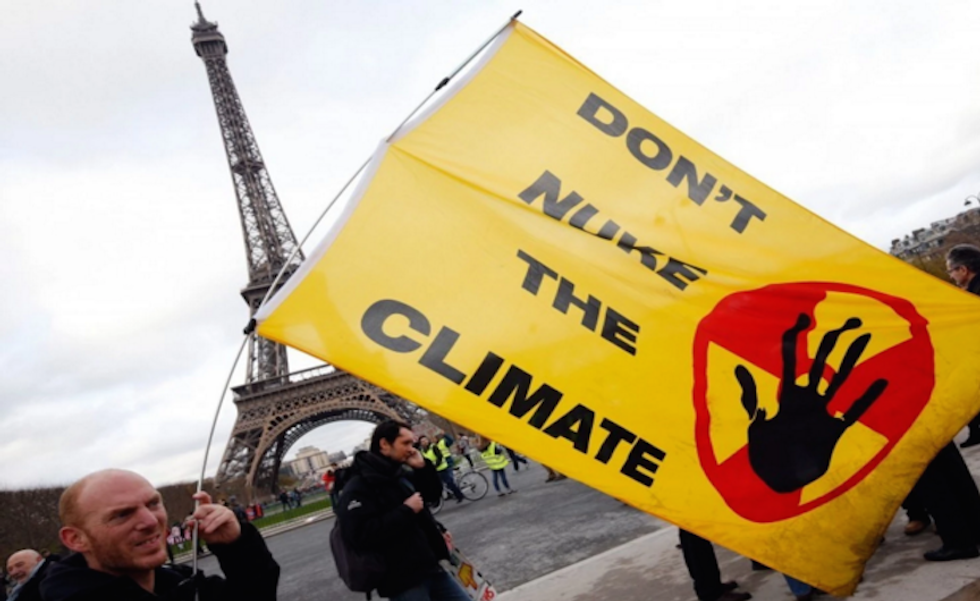 On Saturday, December 12, nearly 200 countries approved a historic climate agreement that aims to reduce greenhouse gas emissions and stem the tide of the worst effects of climate change. Many environmentalists are applauding the deal as it marks the first time that near-global cooperation has been pledged: compare the Paris accord, with nearly 96 percent of global emissions represented, to the Kyoto Protocol negotiations in 1997, which covered only 14 percent of global emissions (with China and the United States, the two largest greenhouse polluters, conspicuously missing).

The overarching goals of the accord are to peak the emission of greenhouse gasses “as soon as possible,” and to limit the increase in the global average temperature to “well below” 2 degrees Celsius above pre-industrial levels (roughly 3.6 degrees Fahrenheit) by the second half of this century. Many scientists and analysts consider 2 degrees the “magic number” after which the worst consequences of climate change – such as rising sea levels – will be seen.

Prior to the Paris talks, governments of 186 nations submitted plans describing how they would cut carbon emissions by 2025 or 2030. The successful implementation of these plans would cut emissions by about half of what is needed to reach the 2 degree threshold.

The key, then, is to ratchet up these initial plans to reach that threshold. The Paris accord builds in a series of requirements for countries to increase the stringency of their policies over time. Every five years, beginning in 2020, countries are required to reconvene with updated plans further increasing their proposed carbon cutbacks. Beginning in 2023, and every five years after that, countries must publicly report on how well they are meeting their goals.

The accord’s preamble also includes a provision calling for developed countries to raise, on their own initiative, at least $100 billion annually to assist developing countries in cutting their emissions and adapting to the effects of climate change. To the

consternation of some developing countries, who had hoped the $100 billion would be anchored in the agreement, the monetary pledge is non-binding. Secretary of State John Kerry made clear in negotiations however that putting the funding provision in the agreement was a nonstarter, stating that “the situation in the U.S. is such that legally binding with respect to finance is a killer for the agreement.” Republican critics, noting the non-binding nature of the financial funding provision, have already threatened to withhold the funding that the United States promised to set aside for this purpose.

Critics argue that there is no legal requirement that emissions meet a specific numeric threshold, nor does the accord say how countries must reach their goals. Rather, the signatories pledge to “reach global peaking of greenhouse gas emissions as soon as possible.”

The amorphous quality of the agreement is due largely to the perception that any binding treaty would be struck down by the United States’ Republican-controlled Senate—many of whom do not believe that global warming is either real or the result of man-made pollution.

Jim Inhofe, the Republican chairman of the Senate Environment and Public Works Committee, and a doubter of the human role in climate change, affirmed this perception, stating that this agreement was no more binding than the Kyoto accord: “Senate leadership has already been outspoken in its positions that the United States is not legally bound to any

agreement setting emissions targets or any financial commitment to it without approval by Congress.”

This means that the agreement is based somewhat tenuously on the hope that countries will feel pressured to live up to their agreements – despite no real consequences if they do not.

It also means that because Congress has been carefully eliminated from the deal, in order for the agreement to have any real weight in the United States, the president needs to stand behind it. As Senate Majority Leader Mitch McConnell said in the weeks leading up to the agreement, “The next president could simply tear it up.” The presidential nominees’ views vary widely – from Ted Cruz’s view that global warming is simply nonexistent to Bernie Sanders’ view that the Paris accord goes “nowhere near far enough.”

Despite these flaws, most see agreement is seen as a good starting point, and momentous in the breadth of cooperation. As Bill McKibben, Co-founder of 350.org, a climate advocacy group, stated in a press release, “This didn’t save the planet but it may have saved the chance of saving the planet.”