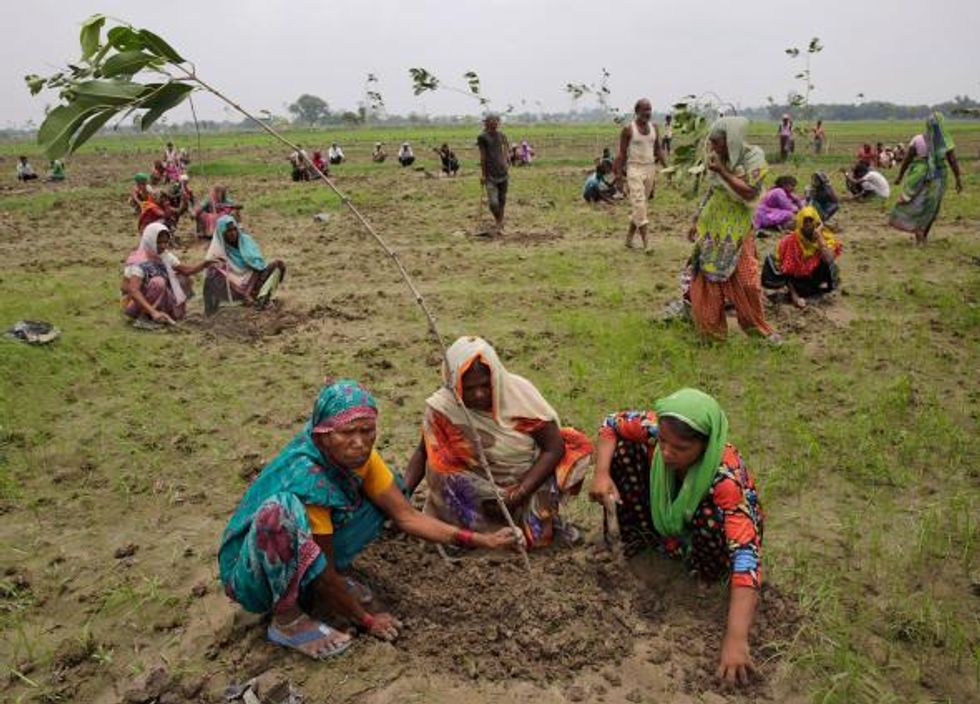 To help the environment, India broke a major record by planting 66 million trees in 12 hours.

Inspired by the Paris Agreement and committed to making positive strides toward combatting climate change, about 1.5 million people placed saplings along the Narmada River in the state of Madhya Pradesh on Sunday, July 2.

This was done as a component of India’s promise in the Paris Agreement and was organized by the Madhya Pradesh government. The South Asian nation pledged to increase forests by five million hectares before the year 2030, or 29 percent of the country’s land.

Twenty-four parcels of the Narmada river basin were selected as planting sites, based on higher estimates of the tree saplings’ survival. Over 20 species of tree were planted in these spots.

With a population of over 1.25 billion, and as the world’s third largest generator of carbon emissions, the role India plays in the Paris Climate Agreement is pivotal. This planting event occurred a month after India’s prime minister, Narendra Modi, once again pronounced India’s commitment to the 2015 Paris Agreement.

“The protection of the environment and the mother planet is an article of faith,” Mr. Modi declared while in Paris last month.

India’s reaffirmation of obligation to the Paris accord follows the controversial exit of the United States from the same agreement.

Just this week, the ten U.S. senators who represented the United States at the 21st Conference of the Parties in 2015 have urged President Donald Trump to reconsider and reverse his decision to leave the Paris Agreement. They cite 900 businesses, including 20 Fortune 500 companies, which support the critical climate change accord, hoping to change the president’s mind.

The United States is currently one of three UNFCCC member states not acceding to the agreement, though the earliest possible effective withdrawal date for the U.S. is November 4, 2020, since it was originally a signatory under President Barack Obama.

In the meantime, the Indian government is taking the manifest climate warnings very seriously.

Shivraj Singh Chouhan, the Chief Minister of Madhya Pradesh, joyfully tweeted, “#MPPlants6CroreTrees is effort in accordance with #ParisAccord. I am proud that Madhya Pradesh has been one of the first to initiate.”

For decades, India was known as a country which produced significant pollution. Poor inner city conditions, coal incineration, secondary sewage treatment and the burning of biomass fuel long weighed on India’s reputation around the globe. However, with the present come new attitudes and habits — largely due to the drop in the cost of solar power — and this is not the first major effort on the part of India to promote some environmentally-sound behavior.

Back in 2016, volunteers in the state of Uttar Pradesh planted 49.3 million trees in one day, setting a world record. This year saw almost a 34 percent increase in trees planted but in half the time!

Representatives from Guinness World Records were present, and their confirmation as to whether this arboricultural effort is the new high score of tree-planting is anticipated in the coming weeks.

But the efforts do not end there. In addition to tree-planting, India has canceled many coal-fired power plants in their early planning stages. This is relatively new, considering just a few years ago, the vast nation was building a multitude of new coal plants. Existing plants are currently running below 60 percent capacity.

Trees cut carbon dioxide from the air, which reduces the atmosphere’s greenhouse gases. In combination with the new coal policies, India — home to six of the 10 top worst cities for air pollution on Earth — is on its way to better air quality.

It is exciting to see such a vast nation beginning to take environmental care so seriously. Hopefully, it will inspire more than a generation of considerate humans to take similar action around the world.