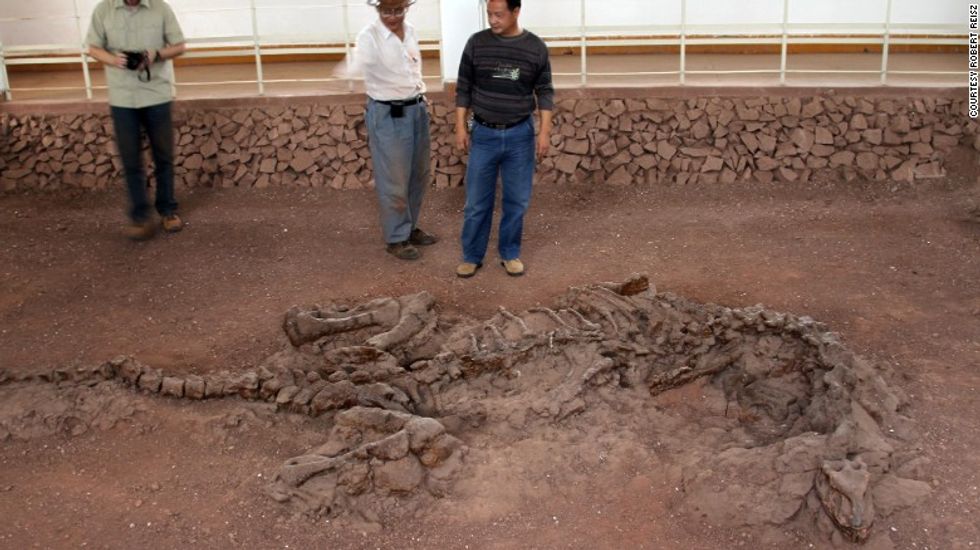 Scientists may have just discovered the oldest soft tissue in existence—inside the bone of a 195-million-year-old dinosaur.

According to a Jan. 31 report in Nature Communications, potential bits of collagen (the structural protein found in connective tissue), as well as possible remnants of blood, were found inside the rib of a Lufengosaurus, a little-known, long-necked plant eater from the early Jurassic period thought to be about 26 feet long.

Lufengosaurus fossils are commonly found in Lufeng, a county in China’s Yunnan Province. Some of the same paleontologists involved in the Nature Communications study discovered nests full of fossilized Lufengosaurus embryos in 2013.

Though collagen has been detected in dinosaur bones before, this particular discovery is considerably older than the previously oldest soft-tissue specimen ever discovered, which was located inside an 80-million-year-old hadrosaur femur.

"We have shown the presence of protein preserved in a 195-million-year-old dinosaur, at least 120 million years older than any other similar discovery," study co-author Robert Reisz, of the University of Toronto Mississauga, told the AFP news agency. "These proteins are the building blocks of animal soft tissues, and it's exciting to understand how they have been preserved.”

Previous paleontological soft-tissue discoveries required either cutting fossils with a grindstone or dissolving bones in acid, but the Lufengosaurus rib was examined using a synchrotron, a type of superpowered X-ray machine the size of a football field, at the National Synchrotron Radiation Research Center in Taiwan. This method not only provides for a clearer look at a specimen, but also prevents damage to the fossil.

"What you normally can't see are the chemical elements from the original organism that might still be present in the fossil,” Stanford Synchrotron Radiation Lightsource staffer Uwe Bergmann toldStanford News in a 2009 article about synchrotron research and fossils. "Using X-ray fluorescence imaging [with a synchrotron machine], we can bring these elements to light, getting a better look at the fossil and learning more about the original animal. These X-rays work a thousand times better than what you could do with a commercial X-ray machine. Only a synchrotron can do this.”

Reisz says the use of a synchrotron machine to examine dinosaur remains holds “great future potential.” The researchers were not only able to find the potential collagen in the Lufengosaurus bone, but proteins within tiny canals that were "probably remnants of the blood vessels that supplied blood to the bone cells in the living dinosaur,” says Reisz.

Of course, the discovery of possible fossilized blood brings to mind the 1990s Michael Crichton science-fiction novel Jurassic Park, and the subsequent hit film of the same name, in which live dinosaurs were cloned using prehistoric blood from a mosquito fossilized in amber.

Could there be even a remote possibility DNA could be extracted from the blood in the Lufengosaurus?

"No, that is still fantasy," says Reisz. Scientists have found DNA has a half-life of only 521 years, which means the prospect of cloning dinosaurs is still firmly ensconced within the realm of science fiction.

Still, with ever-more-advanced methods of fossil examination and genetic research, one never knows what the future may bring.