These Drug Traffickers Just Testified In Court How They Smuggle Drugs Into the United States and Yeah, Donald Trump's Wall Would Not Prevent That 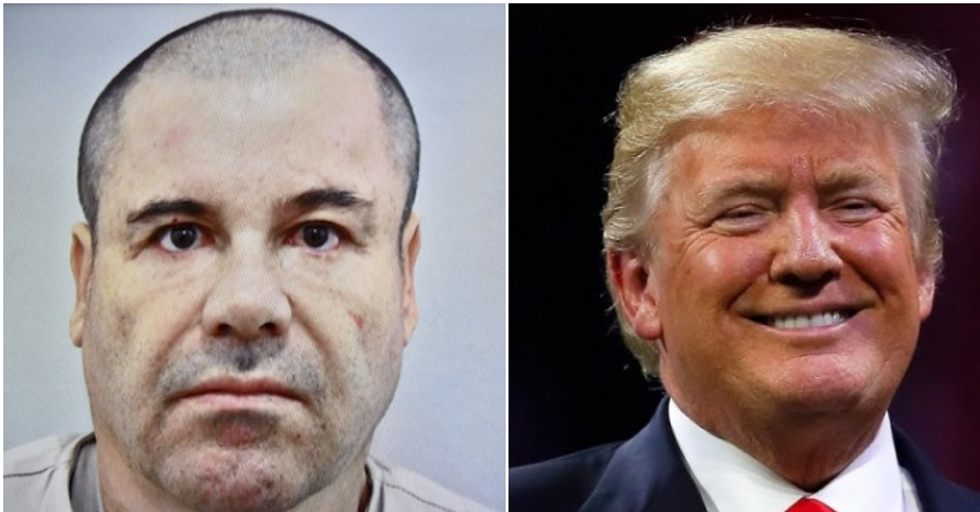 During the trial of Mexican drug lord Joaquín "El Chapo" Guzmán, former cartel members revealed how they brought drugs into the United States. But unlike claims from President Donald Trump, drugs—like most undocumented immigrants—do not enter by walking across the southern border between the United States and Mexico.

While this news comes as no surprise to the experts who call Trump's wall an expensive waste of time and money, some people still think a border wall is the best use of billions of dollars. Democrats point to reports indicating most illegal drugs, and immigrants, enter the United States through legal checkpoints.

Witnesses disclosed the use of tunnels and sea routes to smuggle drugs into the United States. But hiding drugs in shipments that crossed at legal checkpoints and ports of entry were a favored method as they required less effort.

The 10 weeks of testimony at the El Chapo trial have revealed that his innovative smuggling network typically went… https://t.co/5Pmvl3eSNB
— The New York Times (@The New York Times) 1548187217.0

The U.S. government has found that drugs from Mexico are primarily smuggled into the country at official border cro… https://t.co/Ivmz9b6NHw
— Globalnews.ca (@Globalnews.ca) 1547943540.0

"If we build a powerful and fully designed see-through steel barrier on our southern border, the crime rate and drug problem in our country would be quickly and greatly reduced."

"Some say it could be cut in half. We can stop heroin."

President Trump shut down the unfunded parts of the government 33 days ago to try to force Congress to give him billions of dollars for his ineffective border wall. But a Republican controlled Congress had years to fund Trump's wall and chose not to do it.

The one GOP member of the House of Representatives from a district on the border, Texas Representative Will Hurd, is a vocal opponent of Trump's wall. Hurd referred to the wall as the "most expensive and least effective way to do border security."

Poll after poll also reveals the majority of voters also oppose Trump's border wall. And with El Chapo's cartel revelations, people are reiterating the useless aspects of the wall in stopping drug smuggling.

People took to social media, on the President's favorite form of communication to send Trump the message.

It's time to reopen the government and again start paying our #coastguard, which is doing more than half the interd… https://t.co/WIu0bC7A1X
— Karen Tumulty (@Karen Tumulty) 1548202514.0

@Andrew19k @KTLA Illegal border crossing is at an all time low, most people who are here illegally are people who o… https://t.co/gCMNkEHMuK
— Steven Ramirez (@Steven Ramirez) 1548269513.0

@RoyBlunt @DHSgov Been following the trial? Here’s the full story on how drugs are coming across. Why is there a cr… https://t.co/iM7whnaCds
— Jon Heerboth (@Jon Heerboth) 1548281037.0

Whether the President will ever listen to facts or experts about border security remains doubtful though.