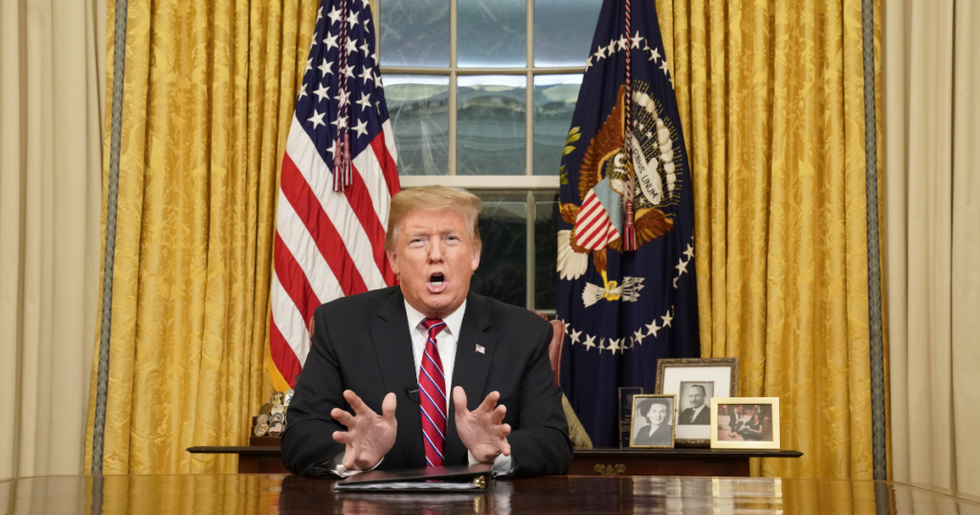 WASHINGTON, DC - JANUARY 08: U.S. President Donald Trump speaks to the nation in his first-prime address from the Oval Office of the White House on January 8, 2019 in Washington, DC. A partial shutdown of the federal government has gone on for 17 days following the president's demand for $5.7 billion for a border wall while Democrats have refused. (Photo by Carlos Barria-Pool/Getty Images)

President Donald Trump repeated his belief that a border wall would prevent drugs from being smuggled into the United States from Mexico despite evidence to the contrary.

"When we talk about drugs coming from China, the fentanyl — you look at the heroin and a lot of the other drugs, they come from — 90 percent, more than 90 percent — from right across the southern border. And unlike what the Democrats say, they don’t, you don’t bring trucks of drugs through the checkpoints. You bring trucks of drugs by making a right 20 miles, and a left into the country. They’re not bringing, you know, they bring massive amounts of drugs, and they do it because there’s no barrier, there’s no hardened wall that you can’t knock down with your breath."

The latest massive drug bust by Border Patrol, however, disproves what Trump is saying about substances flowing in from Mexico.

Customs and Border Protection officers on Thursday discovered 254 pounds of fentanyl - to date the largest seizure of the narcotic - in a truck trying to enter the United States through a legal port of entry in Nogales, Arizona. A drug-sniffing dog caught a whiff during a routine inspection, which tipped off the authorities.

Fentanyl, a pain-killer 100 times stronger than morphine, was stashed in tractor-trailer transporting cucumbers. It often gets mixed in with heroin, frequently resulting in overdoses and death.

Border Protection agents also found 395 pounds of methamphetamine hidden in the truck. Officials estimate the black market value of the drugs to be nearly $5 million.

Trump lauded the bust in a tweet Thursday afternoon.

"Our great U.S. Border Patrol Agents made the biggest Fentanyl bust in our Country’s history," Trump said. "Thanks, as always, for a job well done!

Conveniently, Trump omitted the part about the "trucks of drugs through the checkpoints," which is exactly what happened.

@christinawilkie So now, in his mind, trucks drive through the desert sand?
— Mockingbird (@Mockingbird) 1549044714.0

"This historic drug seizure at a legal port of entry proves wrong nearly every single thing President Trump has said on border security," wrote Durbin. "His big beautiful wall is not an effective way to stop the lethal drugs that are killing our children. Technology and customs officers are."

@g_mom1411 @SenatorDurbin We already have existing barriers that are scaled under, around or over. A “big beautiful… https://t.co/FQvPgStRu2
— TheRealAprilJ (@TheRealAprilJ) 1549048810.0

Not everyone agreed, however. Some pointed out that the checkpoint in Nogales has a wall, used to direct traffic.

Nevertheless, the president has also stated without evidence that those looking to sneak into the United States are using "unbelievable vehicles" to traverse the desert, presumably to avoid legal checkpoints like the one in Nogales.

“The fact is if we don’t have barriers, walls, call it what you want, but if we don’t have very strong barriers where people can not any longer drive right across, they have unbelievable vehicles,” Trump said. “They make a lot of money. They have the best vehicles you can buy. They have stronger, bigger, and faster vehicles than our police have, than ICE has, than Border Patrol has.”

Recently discovered tunnels underneath existing border wall offer additional proof that a wall would not be as effective as the president suggests.