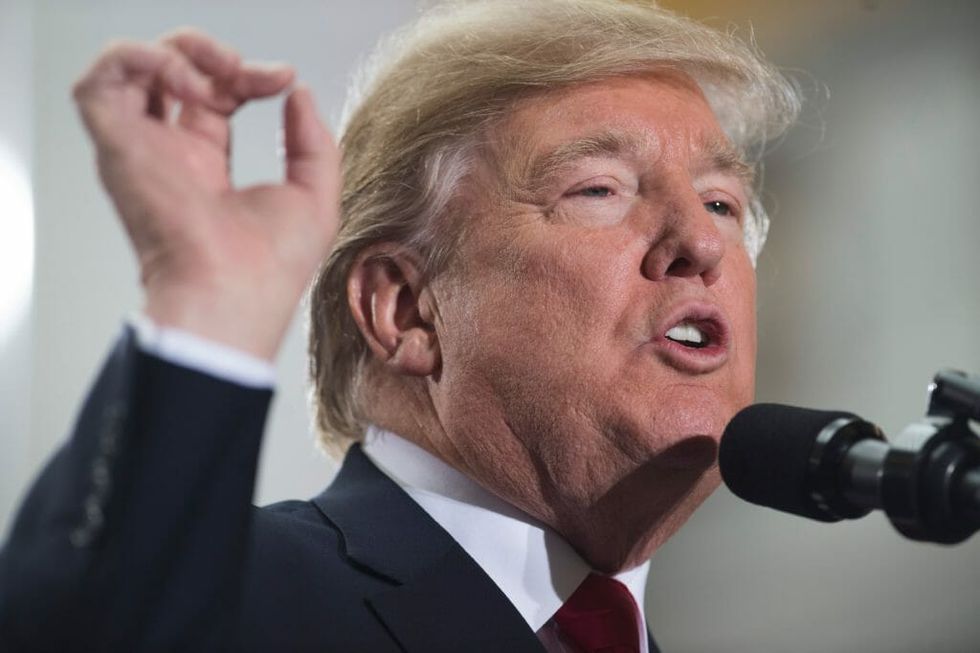 53 percent of U.S. voters disapprove of the controversial Republican tax plan, according to a new Quinnipiac University poll released yesterday. 64 percent believe that if passed, the tax plan would benefit only the nation's wealthiest citizens, while only 24 percent think the middle class would benefit. Just 5 percent believe the plan would benefit those in the lowest income bracket. Those who identified as Republicans––67 percent––vastly approved of the legislation; they are the only demographic along party, race, gender, education or age lines to approve.

Yesterday, President Donald Trump took the opportunity to praise the legislation during a lunch with Senate Republicans at the White House to discuss the tax bill, which recently passed the Senate. "It's a fantastic bill for the middle class," the president said. "I view it as a tremendous bill for jobs and the middle class."

Despite this, the president has continued to advocate for the measure, as evidenced by many of his recent tweets.

Now, we have a once in a lifetime opportunity to RESTORE AMERICAN PROSPERITY – and RECLAIM AMERICA’S DESTINY. But… https://t.co/HNvPxZHEIz
— Donald J. Trump (@Donald J. Trump) 1512002459.0

Trump has also claimed that “the only people” who don’t care for the tax proposal are those who “don’t understand” it and the “Obstructionist Democrats," a sign that he would likely choose to discredit the results of the Quinnipiac poll.

The president's approval rating––already low to begin with––also continues to dip, with 47 percent saying that Democrats would do a better job of handling a tax overhaul (and 55 percent expressing similar opinions in regard to health care legislation):

Voters say 56 - 40 percent that Trump is not fit to be president, tying his all-time low score.

"Deeply unpopular and manifestly unfit for the job. That's the harsh assessment of President Donald Trump, whose tax plan is considered built for the rich at the expense of the rest," said Tim Malloy, assistant director of the Quinnipiac University Poll.

Senate Republicans have slammed the results of recent polls, insisting they've been "distorted."

Sen. Shelley Moore Capito (R-W.Va) says there was little lawmakers could have done to sell the legislation more effectively. “I don’t want to say it’s a messaging failure,” she told The Huffington Post. “I just think that the information on the opposite side is so distorted and sensational that it skews the truth of the actual results of the bill.”

Moore Capito, much like the president, has continued to advocate for the tax bill despite its rampant unpopularity.

When Huffington Post reporters asked Senator Thom Tillis (R-N.C.) about the measure's unpopularity, he insisted it was impossible for legislators to sell tax cuts before they're passed because tax cuts "are generally unpopular," a claim, FiveThirtyEight points out, is historically inaccurate:

Why is support so low? Americans are opposed to the bill because they think it disproportionately benefits the rich. (It likely will.) President Trump’s administration has argued, however, that there were similar complaints about the Reagan tax cut plan of 1981, which preceded an economic boom.

The Reagan plan, though, was far more popular in 1981 than the current Republican plan is now. In a Gallup survey taken in the days after Reagan signed his tax cuts into law on Aug. 13, 1981, 51 percent of Americans were in favor of it. Just 26 percent of Americans were opposed. The other major tax cut of the Reagan administration (signed in 1986) wasn’t nearly as popular, but it was still more popular than the current GOP legislation. A CBS News/New York Times survey conducted in the days after the bill passed Congress found 38 percent in favor and 34 percent opposed.

A report from Politico posits that Republicans "are giving taxpayers little time to adjust to sometimes major changes in policy." They expect, for example, to implement the new tax regime on January 1, only days after they hope to push it through Congress.

“The more you read, the more you go, ‘Holy crap, what’s this?'” said Greg Jenner, a former top tax official in George W. Bush’s Treasury Department. “We will be dealing with unintended consequences for months to come because the bill is moving too fast.”