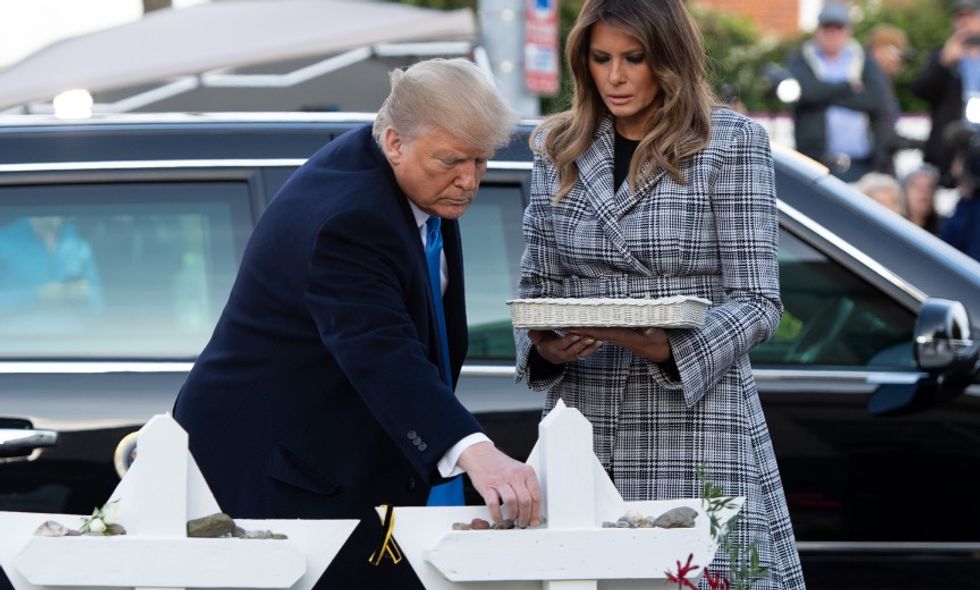 US President Donald Trump and First Lady Melania Trump place stones and flowers on a memorial as they pay their respects at the Tree of Life Synagogue following last weekend's shooting in Pittsburgh, Pennsylvania, October 30, 2018. - Scores of protesters took to the streets of Pittsburgh to denounce a visit by US President Donald Trump in the wake of a mass shooting at a synagogue that left 11 people dead. Demonstrators gathered near the Tree of Life synagogue, where the shooting took place, holding signs that read 'President Hate, Leave Our State!' and 'Trump, Renounce White Nationalism Now.' (Photo by SAUL LOEB/AFP/Getty Images)

On Tuesday, mere days after the horrendous and tragic shooting at Tree of Life Synagogue, which took the lives of 11 people and whose attack is believed to be motivated by antisemitism, President Donald Trump and First Lady Melania Trump arrived in Pittsburgh to meet with members of the community and pay their condolences.

A day later, the president tweeted a White House video showing the first couple along with daughter Ivanka Trump and son-in-law Jared Kushner (both presidential advisors as well) talking with law enforcement officers and temple members.

The video was set to mournful music - a marked contrast against the signature tactlessness Trump displayed to accompany the tweet.

Rather than acknowledging the lives lost or that the perpetrator is believed to have acted on white nationalist principles shared and spread by many in Trump's administration, the president used the "very sad and solemn day" to take an all-too-familiar swipe at the media.

Melania and I were treated very nicely yesterday in Pittsburgh. The Office of the President was shown great respect… https://t.co/oF3EH6QweS
— Donald J. Trump (@Donald J. Trump) 1540991355.0

However, the media's coverage was widely accurate. The protest amassed a huge amount of people and took place only a block away from the synagogue.

Americans pointed this out.

Nor were they here for Donald Trump's self-absorption.

@realDonaldTrump "Oh, and *I* get to use this 'sad and solemn occasion' to take another gratuitous shot at the FREE… https://t.co/SEyWUqaCDf
— Charles H Norman (@Charles H Norman) 1540996988.0

@realDonaldTrump No thought for the victims? the first responders? the families? a grieving community? a grieving nation?
— Mia Farrow (@Mia Farrow) 1540995952.0

@realDonaldTrump No one from either party wanted to accompany you there or even be seen with you. Knowing that it… https://t.co/bBACAL3XQZ
— Bruno Amato (@Bruno Amato) 1540996783.0

While the video may have attempted to paint Trump as presidential in the face of a national tragedy, it should be noted that many of those directly affected by the shooting did not want him there.

Lynette Lederman, a former president at the Tree of Life Synagogue, didn't mince words when it came to whether or not the Donald Trump was welcome in Pittsburgh:

"The hypocritical words that come from him tell me nothing. We have very, very strong leadership in this city. We have a very strong mayor with very strong values, a very strong county executive in Rich Fitzgerald. We have people who stand by us, who believed in values — not just Jewish values, but believe in values — and those are not the values of this President and I do not welcome him to Pittsburgh."

An open letter signed by 35,000 people said that the president wasn't welcome until he denounced white nationalism and changed his actions. Pittsburgh's mayor asked that Trump hold off on visiting until the victims were buried.

In addition, a presidential visit requires a huge amount of resources for security. Because this was a hate crime and with the possibility of copycat attacks at the funerals, many thought it was uncouth of Trump to take away resources that could've gone to citizens.

Twitter users pointed out that the president was not wanted there.

Many thought the video itself was in poor taste.

@realDonaldTrump This has to be the most bizarre and obnoxious thing I’ve ever seen done by a president. You make… https://t.co/7HTsrzm4z7
— Julaine Nickels (@Julaine Nickels) 1540995902.0

As Pittsburgh heals, it's unlikely that Americans can rely on comfort or leadership from this president during times when hatred seems to reign.