It Sure Sounds Like Donald Trump Just Threatened Violence Against His Political Enemies by His Supporters in the Military, Police, and 'Bikers for Trump' 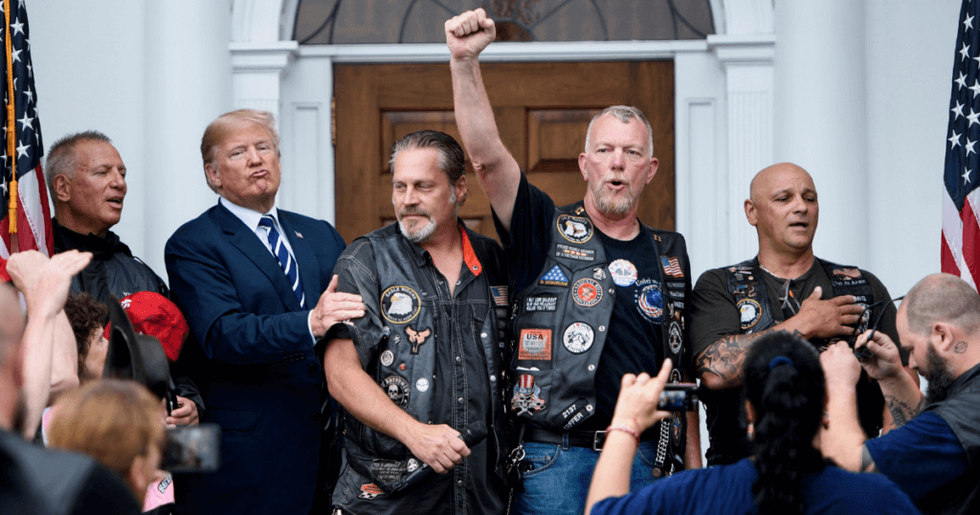 US President Donald Trump listens as supporters cheer following the pledge of allegiance during a Bikers for Trump event at the Trump National Golf Club August 11, 2018 in Bedminster, New Jersey. - Trump welcomed approximately 180 bikers made up of Veterans, law enforcement, supporters and members from the Bikers for Trump New Jersey chapter. (Photo by Brendan Smialowski / AFP) (Photo credit should read BRENDAN SMIALOWSKI/AFP/Getty Images)

President Donald Trump on Wednesday threatened to unleash the anger of his base over what he perceives as "vicious" attacks from the left.

“So here’s the thing—it’s so terrible what’s happening,” Trump alleged in the exclusive interview. “You know, the left plays a tougher game, it’s very funny. I actually think that the people on the right are tougher, but they don’t play it tougher. Okay?"

What Trump said next was harrowing.

The president warned that his aforementioned base may have no choice but to turn violent if Democrats in the House continue to investigate his finances, his businesses, and his suspected clandestine relationship with Russia.

"But they don’t play it tough — until they go to a certain point, and then it would be very bad, very bad."

"But the left plays it cuter and tougher," Trump continued. "Like with all the nonsense that they do in Congress … with all this invest[igations]—that’s all they want to do is –you know, they do things that are nasty. Republicans never played this.”

Barack Obama and Bill Clinton had it easy with Republicans in Congress, apparently.

Historical revisionism aside, Trump's remarks have disturbed Americans across the country, who are interpreting his words as fascist dog whistling.

Trump, from breitbart. Never mind that yes of course the republicans have sought & had investigations (what?), the… https://t.co/DMBvYFoVmH
— benmont tench III (@benmont tench III) 1552575050.0

—so when trump makes veiled threats at his opponents, as he did to Breitbart, from his position as president of the… https://t.co/XuKnnRET9T
— Deanie Mills (@Deanie Mills) 1552582313.0

Using paramilitaries like biker gangs has been a common authoritarian tactic. A pro-Putin biker gang—dubbed the Night Wolves—have used their "tough" aesthetic to incite violence and fear in Ukraine on Putin's behalf as recently as last year.

@ddale8 So, in other words, the president is condoning/inciting violence against his political enemies? Fascist, much?
— Eric Slater (@Eric Slater) 1552572804.0

And this was not the first time Trump has sprinkled the seeds of armed insurrection.

Following the deadly white nationalist rally in Charlottesville, Virginia in 2017, Trump said that "bikers for Trump" were "peaceful people" and that he hopes they "stay that way."

This is not normal behavior for a US president.

Incidentally, we were recently warned. During his tesimony before the House Oversight Committee last month, Trump's former fixer Michael Cohen predicted that Trump would refuse to peacefully relinquish power if he loses the 2020 election.

"I fear that if he loses the presidential election in 2020, there will never be a peaceful transition of power," Cohen said.