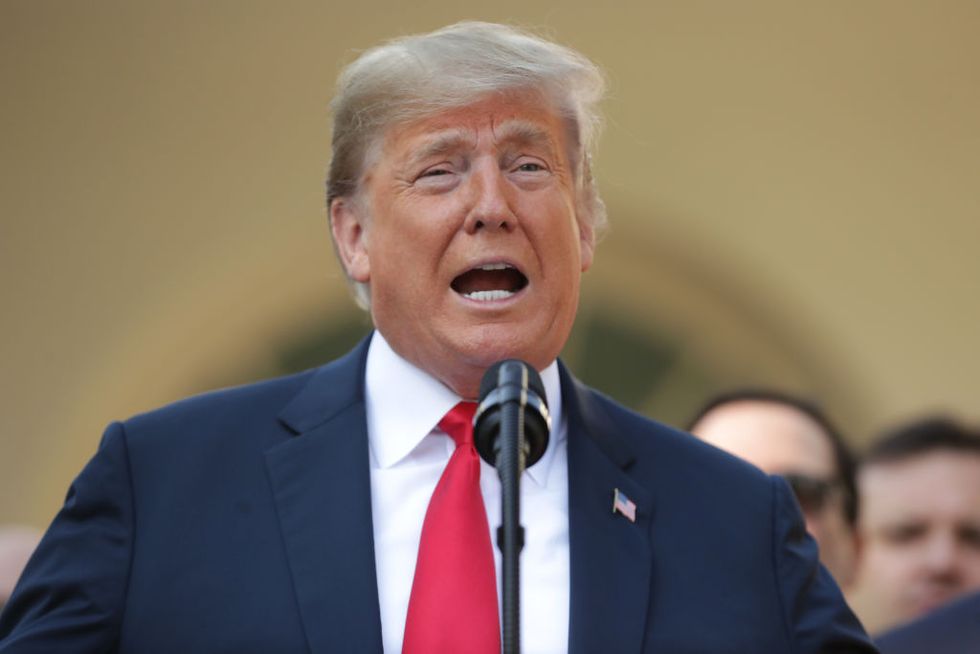 WASHINGTON, DC - OCTOBER 01: U.S. President Donald Trump speaks during a press conference to discuss a revised U.S. trade agreement with Mexico and Canada in the Rose Garden of the White House on October 1, 2018 in Washington, DC. U.S. and Canadian officials announced late Sunday night that a new deal, named the "U.S.-Mexico-Canada Agreement," or USMCA, had been reached to replace the 24-year-old North American Free Trade Agreement. (Photo by Chip Somodevilla/Getty Images)

From his taxes to Trump University, it's no secret that President Donald Trump's name is on as many scams as it is on buildings, but a newly popular swindle touted by some of his supporters has left no head unscratched.

As a new report from the Daily Beast reveals, a number of Trump supporters are investing thousands of dollars in the Dinar. Over years of tumult, the Iraqi currency has dropped in value to around one-tenth of the U.S. penny. Yet these investors believe that the Dinar's value will increase to its $3 value from before the First World War, turning thousands of dollars down the drain into millions in the bank.

Though the Dinar scam has been around for decades, its associations with Trump skyrocketed around the time of his presidential campaign. Some investors also cite a pledge he made in 2017, in which he said all currencies would be on an "even level." Despite the fact that Trump was referring to unequal trade with China, many supporters took this as a sign that the Dinar's value could go up. Some insist that Trump has invested in it himself, to great returns.

Though Trump is virtually powerless to increase the value of a foreign country's currency, his supporters are still expecting him to deliver on a promise he never actually made.

@realDonaldTrump Mr. President, i know you're a business man above all else. You can balance the American budge… https://t.co/G5XRkNxeUL
— Betty J Harris (@Betty J Harris) 1514929475.0

The devotion of these followers has befuddled nearly everyone.

MAGA'ers sinking their life savings into the Iraqi currency because they think Trump will magically make it worth 3… https://t.co/13aprNPxT9
— Pé Resists (@Pé Resists) 1542727936.0

Despite there being no substantiation that Trump himself has invested in the Dinar, the carefully constructed image of him being a successful businessman has given these supporters faith that he will make them rich.

With no legislative experience and never having run for public office, virtually the only quality giving Trump some sort of credibility to pursue the presidency in 2015 was some Americans' perception of him as a business genius.

This is in spite of the fact that virtually no American bank would lend to Donald Trump in the 90's and despite Donald Trump having declared bankruptcy multiple times.

Yet for decades, many Americans have associated Donald Trump with success and business acumen. Crafted over years of questionably-funded properties sporting his name as well as a popular NBC show, this perception was no accident.

Now, many more aren't buying what Trump is selling.

@GOPChairwoman @realDonaldTrump How would Trump have done if he was handed the hot mess Obama was? Trump was handed… https://t.co/NNv3lMJaAo
— Darin Turner (@Darin Turner) 1541213047.0

@ProPublica Wow. The Trumpskys clear have a pattern/business model w/how they dupe partners. This sounds like the… https://t.co/IhXJEYbt14
— Jeff Woolsey (@Jeff Woolsey) 1541136040.0

@realDonaldTrump The president should have more important things to be doing but alas .. it’s you . The failed business man con artist
— Mary (@Mary) 1542230431.0

Though most people can see right through a scam as blatant and well-known as investing thousands in the Dinar, it's unclear when some will realize that - unlike his steaks - the president's business ventures aren't well done.