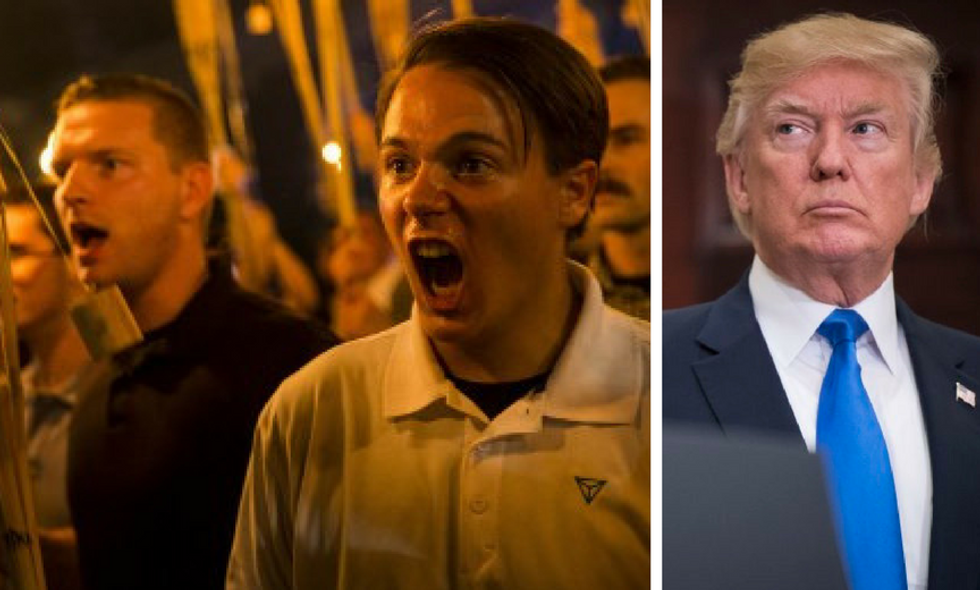 After the violence perpetrated by white supremacists in Charlottesville, Virginia on Saturday, Donald Trump took to the podium and gave what was widely seen as an inadequate statement of condemnation of the violence.

"We condemn in the strongest possible terms this egregious display of hatred, bigotry and violence on many sides...It has no place in America, what is vital now is a swift restoration of law and order..."

What is vital now is a swift restoration of law and order and the protection of innocent lives. #Charlottesville https://t.co/DB22fgnu6L
— Donald J. Trump (@Donald J. Trump) 1502569395.0

Many, including prominent Republicans, felt his response didn't go far enough to call out the perpetrators of the violence by name.

Mr. President - we must call evil by its name. These were white supremacists and this was domestic terrorism. https://t.co/PaPNiPPAoW
— Cory Gardner (@Cory Gardner) 1502570669.0

Scaramucci on Trump's Charlottesville statement: "He needed to be much harsher as it related to white supremacists.… https://t.co/SSDTbLKqZr
— ABC News (@ABC News) 1502648088.0

One group that did appreciate Trump's comments, however, was the white nationalist website The Daily Stormer, which wrote:

Trump comments were good. He didn’t attack us. He just said the nation should come together. Nothing specific against us...

There was virtually no counter-signaling of us at all.

He said he loves us all.

“No condemnation at all. When asked to condemn, [Trump] just walked out of the room. Really, really good. God bless him.”

“The President’s talk of violence ‘on many sides’ ignores the shameful reality of white supremacism in our country today, and continues a disturbing pattern of complacency around such acts of hate."

At every level, elected officials in America must denounce white supremacy, Nazism & any rhetoric that empowers those who seek to divide us.
— Ralph Northam (@Ralph Northam) 1502642237.0

Trump demonstrated a hateful hypocrisy in failing to name the white supremacist hate for what it is. My statement: https://t.co/byrFAsBIrb
— Cory Booker (@Cory Booker) 1502602285.0

On Sunday, The White House tried to respond again, although Trump himself remained silent:

“The president said very strongly in his statement yesterday that he condemns all forms of violence, bigotry, and hatred. Of course that includes white supremacists, KKK Neo-Nazi and all extremist groups. He called for national unity and bringing all Americans together.”