Donald Trump Made a Questionable Claim About Pearl Harbor to the Prime Minister of Japan, and People Have Questions 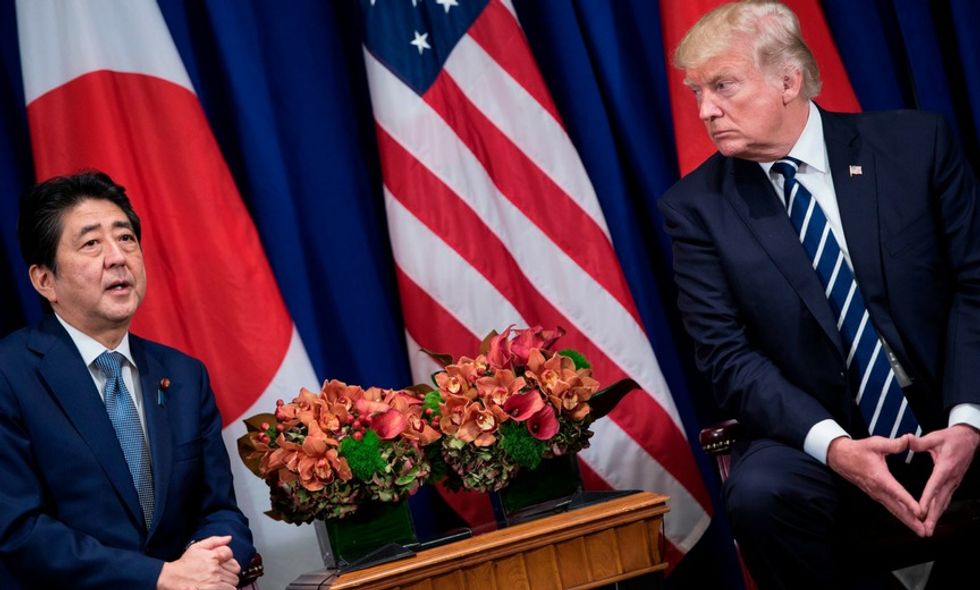 "I remember Pearl Harbor," Trump said. "I’m on to the Japanese."

The Washington Post reported on Tuesday that Trump shocked Abe with his remark during a contentious White House meeting about trade. "I’ve never heard him [trash]-talk Abe. And you can’t say that about a lot of the world leaders," one anonymous official told WaPo.

The meeting, which left Abe exasperated, epitomized the paradoxical nature of Trump’s closest relationship with a foreign leader.

He has, however, recognized the historical significance numerous times on Twitter.

Does Trump own a time machine?

Was he referring to the movie?

It reminded some people of when Trump told Canada he remembered the burning of the White House during the War of 1812 - which was fought against the British.

What about when the United States dropped two atomic bombs on Japan in 1945?

The Alamo? The fifth of November?

WaPo wrote that although Trump and Abe have developed a close working relationship, to the point of Trump considering Abe to be a "good friend," "the president’s unorthodox approach to North Korea and deeply negative view of Japan’s trade practices have locked Trump and Abe in a series of agree-to-disagree stalemates, to the growing frustration of Tokyo."

Shihoko Goto, a Japan expert at the Wilson Center said: "Abe hoped his relationship with Trump would translate into strong bilateral relations. But on both the security and economic fronts, he has faced major setbacks."

Notably, Trump's levying of tariffs on aluminum and steel, from which Japan was not granted an exemption, and the president's dismissal of Abe's advice on how to North Korea, have stymied the relationship between the United States and Japan.

"The president has been frank from the start with Prime Minister Abe," one senior administration official told WaPo. "We’re going to start taking measures that are designed to inject greater reciprocity into the relationship, that are going to force partners around the world to share the burden of upholding the international system. If we want it to continue, then it’s got to work for the United States, which is the biggest member of the grouping."

"Abe was completely ignored" when he urged Trump to not cancel military exercises with South Korea, for example, which Trump decided to do ahead of his June summit in Singapore with North Korean leader Kim Jong Un, said a source close to Abe.

As far as Trump's perception of Japanese history, which one official said he equates with a "samurai past," falls right in line with what people expect of him.

?Although disturbing, this rhetoric hardly veers from Trump’s comments against Japan on the campaign trail," Goto said. "His views of the Japanese economy then were based on the perceptions of the 1980s and ’90s, rather than the realities of today. So it may not be a surprise if his worldview, especially of Asia, is derived back from World War II, rather than today."