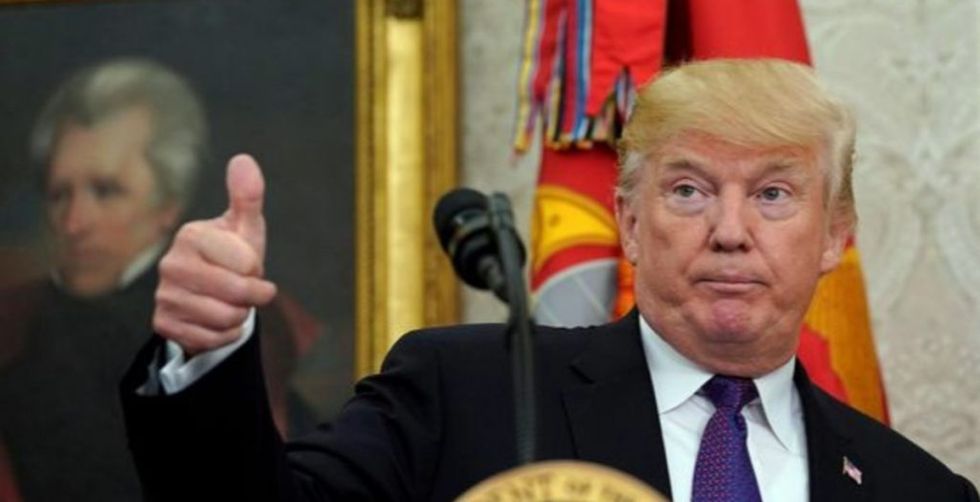 One of the more absurd revelations coming from the tell-all book and secret White House recordings—made by a hand-picked appointee of President Donald Trump—involves a ridiculous argument Trump started with a group of veterans about the movie Apocalypse Now. Among their number were several who served in the war Trump opted out of: Vietnam.

Having chosen advisers and administration officials unprepared and completely incompetent in matters involving the federal government, the behind the scenes look at the early days of the Trump White House exposed a comedy of errors.

One such incident began with a 2017 meeting between Omarosa Manigault-Newman—who had just been placed in charge of veterans issues by Trump to the disgust of many veterans—Veterans Affairs Secretary David Shulkin, a handful of White House staffers and representatives from various veterans organizations representing about six million veterans.

Despite dropping in on several meetings and surprising tourists that day, the President skipped the veterans meeting entirely. Once word of the snub became public knowledge, people expressed their extreme displeasure on social media.

After the backlash of being pushed off by the President onto a former contestant from his reality show—who like Trump never served in the military—another meeting convened in the Roosevelt Room on March 17, 2017, which included the President and Omarosa.

However—drawing on his years of experience watching war dramas on television and in movies—Trump started an argument with Vietnam War veterans about the movie Apocalypse Now.

One anonymous attendee described the President's decision to bicker over details from a movie by stating:

It was really fucking weird."

The squabble began with a comment by Rick Weidman, co-founder of Vietnam Veterans of America. When asked for his Trump administration wishlist item, Weidman brought up the issue of the herbicide Agent Orange.

Weidman asked Trump and his team to extend benefits to more veterans poisoned by Agent Orange during the Vietnam War. The President replied it was already taken care of, which confused the veterans in attendance.

And the resulting exchange was both baffling and disturbing.

The veterans present attempted to explain the limited help available to those affected by the herbicide. But instead of listening, Trump asked them if Agent Orange was "that stuff from that movie."

Here is the scene, featuring actor Robert Duvall in the role of Lieutenant Colonel Bill Kilgore.

Several people—including Vietnam War veterans—informed Trump the Apocalypse Now scene involved napalm, not Agent Orange. Agent Orange is an herbicide and defoliant chemical later proven to cause a host of illnesses after exposure.

Napalm—initially used as an incendiary device against buildings and later as an anti-personnel weapon—is a mixture of a gelling agent and either gasoline or another highly flammable substance. Napalm sticks to skin and causes severe burns making it an effective but insidious weapon.

Napalm and Agent Orange are entirely different, completely dissimilar, not at all the same things.

But Trump refused to accept his error and kept repeating, "no, I think it’s that stuff from that movie." Had the President remembered the movie a little more clearly, he might remember Robert Duvall's famous line from the scene he referencered.

I love the smell of napalm in the morning."

Rather than resume the meeting—focusing on the true purpose of listening to veterans' needs and concerns—Trump went around the room asking everyone whether it was Agent Orange or napalm. According to attendees, Trump finally asked Weidman if it was napalm or Agent Orange.

The Vietnam Veterans of America co-founder reiterated the scene depicted a napalm drop and added as an actual veteran of the war Apocalypse Now dramatizes, he disliked Coppola's film. Weidman stated the over the top movie did a disservice to Vietnam War veterans.

According to several meeting attendees, Trump finally dismissed the debate he started by replying to the Vietnam veteran, "Well, I think you just didn’t like the movie." Weidman confirmed the discussion occurred during the March 2017 meeting and that he does, in fact, dislike Apocalypse Now.

The protracted argument—where only Trump agreed with Trump—lasted several minutes. The President's inability to admit he was wrong or to stay on topic resulted in not all veterans present getting a chance to speak about their needs.

Which is the real point of this story that everyone should focus on.

The disrespect Trump shows towards those who fought the war he ran away from is truly staggering. His absolute unwi… https://t.co/CG43vCeiFq
— VoteVets (@VoteVets) 1534521627.0