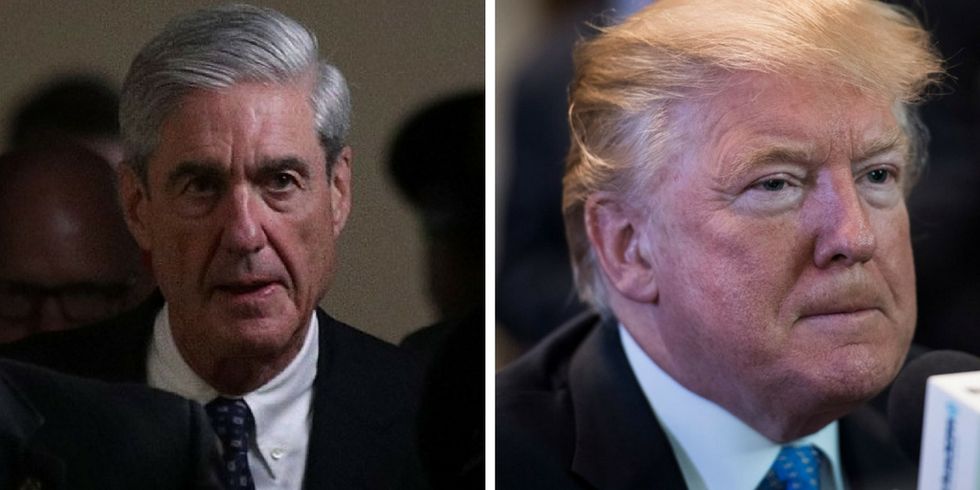 According to The Washington Post, the West Wing staff were concerned when Trump didn't show up in the Oval Office. Instead, he spent Monday morning sequestered in the White House residency, "seething" as he monitored the television and the news. Sources close to him said he was exasperated, disgusted, and irritated, calling his lawyers repeatedly, as he watched on live television his former campaign manager turning himself in to the FBI.

That morning Trump tweeted "Sorry, but this was years ago, before Paul Manafort was part of the Trump campaign," as if to vindicate himself, washing his hands as would Pontius Pilate. Then he distracted and redirected by talking about "Crooked Hillary & the Dems."

As if an afterthought, he reiterated once again that "there is NO COLLUSION!"

After that he went silent on Twitter for the day. Maybe Trump thought he was out the woods after seeing the indictments had nothing to do with him (for now). Then came the George Papadopoulos bombshell, blindsiding the president.

Papadopoulos, an unpaid foreign policy advisor on Trump's campaign, pleaded guilty earlier this month to making false statements to the FBI, regarding his efforts to broker a relationship between Trump and Russian President Vladimir Putin. His plea was unsealed on Monday by Mueller's investigation team.

Trump's lawyer tried to lessen the significance of this, indicating that the president is not bothered by the new revelation.

“This has not been a cause of great agita or angst or activity at the White House,” said White House laywer Ty Cobb. He added that Trump is “spending all of his time on presidential work.”

Yet the indictment handed out on Monday says Papadopoulos, who was arrested back in July, has talked with the government “on numerous occasions to provide information and answer questions.”

Trump has previously referred to Papadopoulos as a nobody, claiming that "few people knew" him. Yet in a March 2016 Washington Post interview, Trump said that Papadopoulos is an "excellent guy," while talking about his new foreign policy team. Later that month Trump posted a photo on Instagram with Papadopoulos: "Meeting with my national security team." Papadopoulos sits four seats to Trump's right.

After the news of the Papadopoulos plea deal broke on Monday, Trump took to Twitter to discredit the aide: "Few people knew the young, low level volunteer named George, who was already proven to be a liar."

If Papadopoulos is a liar, someone should tell Trump that we are the company we keep.

White House press secretary Sarah Sanders also tried to diminish the the relevance of Papadopoulos by stating at Monday's briefing that he was merely an unpaid volunteer. But this was the norm for Trump's campaign, as Manafort, Gates, Jared Kushner, and Steven Bannon were all unpaid "volunteers" during Trump's campaign last year.