The visual representation of Fake News. 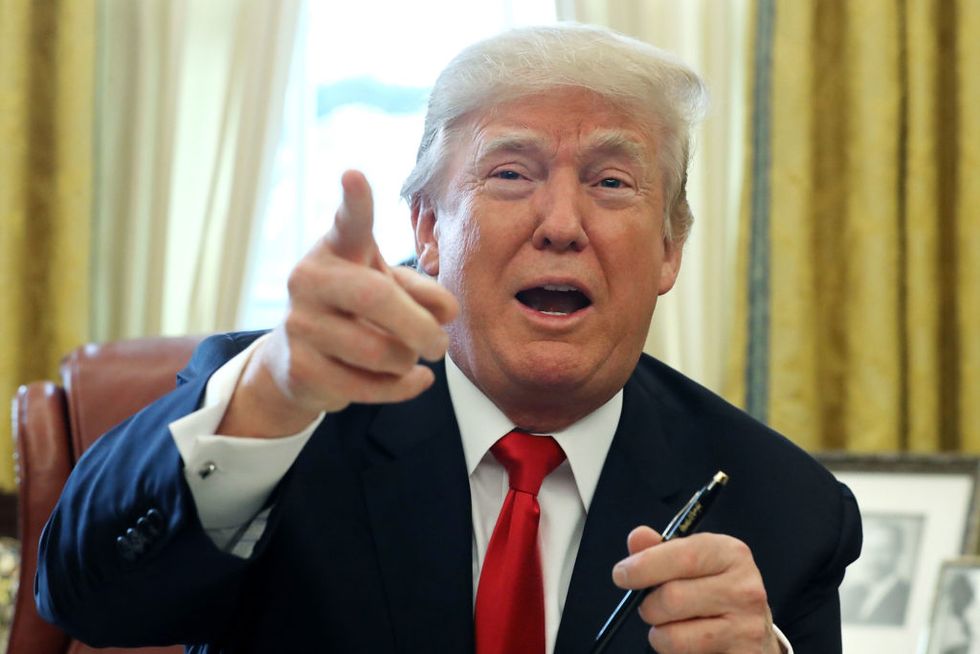 On December 21, Donald Trump posted a tweet to his official Twitter account: "Some of the many Bills that I am signing in the Oval Office right now. Cancelled my trip on Air Force One to Florida while we wait to see if the Democrats will help us to protect America’s Southern Border!”

Trump has been butting heads with Democrats over his demand for $5.7 billion to fund a 215 mile wall along the Mexican border.

He accompanied the tweet with a picture of himself in the Oval Office, surrounded by a massive stack of black folders, signing his name to a piece of paper.

The problem? The paper appeared to be completely blank.

Twitter wasted no time going after Trump for the pic.

You are signing a blank piece of paper. Do you not know people can zoom in on these you cretin? #ResignTrump https://t.co/HE5wyQH6zN
— Patton Oswalt (@Patton Oswalt) 1545458328.0

@realDonaldTrump “Some of the many Bills that I am signing...” on blank parchment with a capped pen? Couldn’t you… https://t.co/JxGkcAuJOO
— Tony Pichardo (@Tony Pichardo) 1545500246.0

Of course, this isn’t the first time Trump has been accused of using blank paperwork as a prop. In 2017, it was reported that Trump surrounded himself with blank papers during a press conference.

The photo and tweet came on the eve of a government shutdown, which Trump blames on Democrats who refused to approve his border security spending bill - which was, presumably, one of the documents causing him to cancel his holiday plans.

Despite the huge stack of paperwork, only two bills were signed on the day of the tweet, and none have been signed since then.

Trump tweeted a picture of himself ready to sign a bill, but Twitter users pointed out that the page seemed blank -… https://t.co/OVzefNxHeZ
— Randy Brown (@Randy Brown) 1545677830.0

@realDonaldTrump Those bills sure are missing a lot of text, there, sparky. Instead of photo ops with blank papers,… https://t.co/kEghxf1qOt
— VegasRyan (@VegasRyan) 1545514885.0