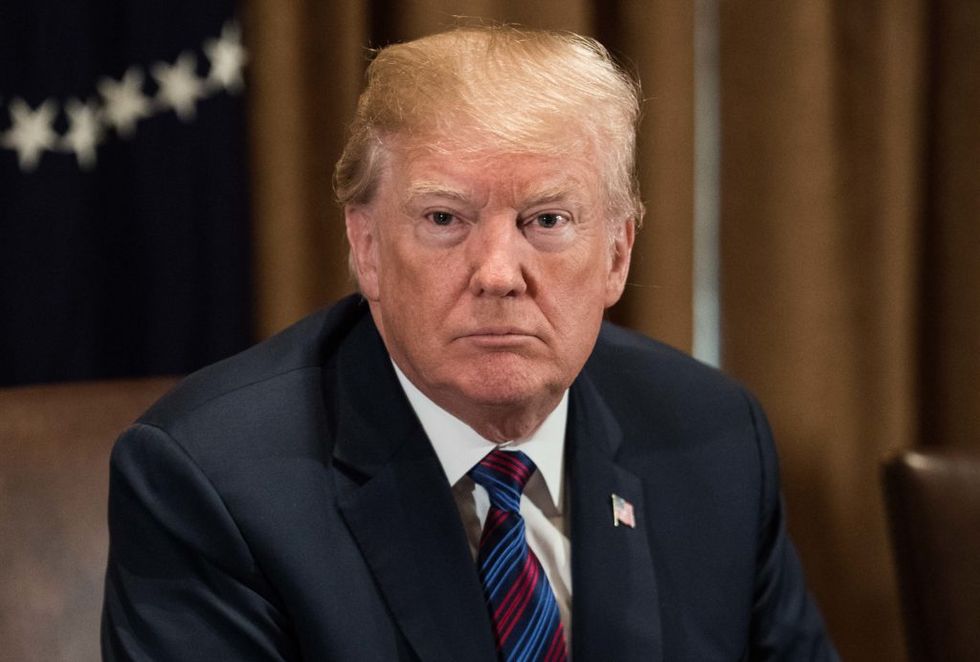 US President Donald Trump attends a meeting with governors and members of Congress on agriculture at the White House in Washington, DC, on April 12, 2018. / AFP PHOTO / NICHOLAS KAMM (NICHOLAS KAMM/AFP/Getty Images)

On Thursday, copies of James Comey’s upcoming memoir 'A Higher Loyalty' were leaked to the press. In the book, Comey compares Trump to a mob boss, and says that Trump’s behavior and personal manner gave him flashbacks to his tenure as a Manhattan prosecutor going after the mafia. Comey also wrote that Trump’s propensity for lying rendered him “untethered by truth.”

In response, President Donald Trump began his Friday with a stunning tweetstorm against Comey, whom the president assailed as "a proven liar and leaker" and "untruthful slimeball."

In the first of two tweets, Trump accused Comey of leaking classified information and lying to Congress under oath.

Sixteen minutes later, Trump said Comey was "a terrible director of the FBI." He then referred to Comey's handling of the Hillary Clinton email fiasco as one of the "worst 'botch jobs' of history," and that "it was my great honor to fire James Comey!"

@realDonaldTrump Almost everyone in your office has lied under oath. Why hasn’t Jared been charged yet for all of t… https://t.co/NTz72jzQJT
— Sandy Resists (@Sandy Resists) 1523623614.0

@realDonaldTrump You are a proven liar, cheater, crook and there are decades of evidence to prove it. You are a fai… https://t.co/B8gePFN1eQ
— Resistance (@Resistance) 1523626360.0

It is widely believed that Comey handed the presidency to Trump when he announced the reopening of the email probe shortly before the 2016 election, which means the 45th president is antagonizing, if not slandering the man whose actions put him in office.

The book's account of Trump's level of dishonesty as president is remarkable. Notably, Comey recalled an instance in January 2017, when Trump asked Comey for personal loyalty.

I had never seen anything like it in the Oval Office. As I found myself thrust into the Trump orbit, I once again was having flashbacks to my earlier career as a prosecutor against the Mob.

The silent circle of assent. The boss in complete control. The loyalty oaths. The us-versus-them worldview.

The lying about all things, large and small, in service to some code of loyalty that put the organization above morality and the truth.

To my mind, the demand was like Sammy the Bull's Cosa Nostra induction ceremony — with Trump in the role of the family boss, asking me if I have what it takes to be a 'made man.'

A Higher Loyalty contains additional accounts of what Comey details as mob boss-like behavior by the then president-elect and his inner circle, specifically when Trump was informed of the Russian plot to hijack the election and install Trump as president.

Holy crap, they are trying to make each of us an 'amica nostra' - a friend of ours. To draw us in.

As crazy as it sounds, I suddenly had the feeling that, in the blink of an eye, the president-elect was trying to make us all part of the same family.

A Higher Loyalty: Truth, Lies, and Leadership is scheduled for release next Tuesday.

This upcoming Sunday, ABC News will air a one-hour-long segment of a five-hour interview between Comey and George Stephanopoulos on 20/20.

Efforts to undermine the former FBI Director have expanded beyond the president and Fox News pundits. Earlier this week, the Republican National Committee launched a website, lyincomey.com, which seeks to malign and discredit Comey.

Perhaps the most stunning aspect of the Trump-Comey spat is the GOP's total embrace of and complete descent into Trumpism. This is particularly vexing when considering the president's rapidly escalating political and personal legal woes. On Monday, the FBI raided the homes and office of Michael Cohen, Trump's long-time personal attorney, and self-described "right hand."

Last night, NBC News reported that talks between Mueller and Trump's legal team have broken down and that the special counsel's office plans on proceeding without an interview with the president. Special Counsel Robert Mueller appears to be ready to announce his findings and recommendations in the ongoing investigation of possible obstruction of justice by the president.

Three sources familiar with the investigation said the findings Mueller has collected on Trump’s attempts to obstruct justice include: His intent to fire former FBI Director James Comey; his role in the crafting of a misleading public statement on the nature of a June 2016 Trump Tower meeting between his son and Russians; Trump’s dangling of pardons before grand jury witnesses who might testify against him; and pressuring Attorney General Jeff Sessions not to recuse himself from the Russia investigation.