Donald Trump Is Getting Dragged for Not Reciting a Prayer During George H. W. Bush's Funeral, and Everyone's Making the Same Joke 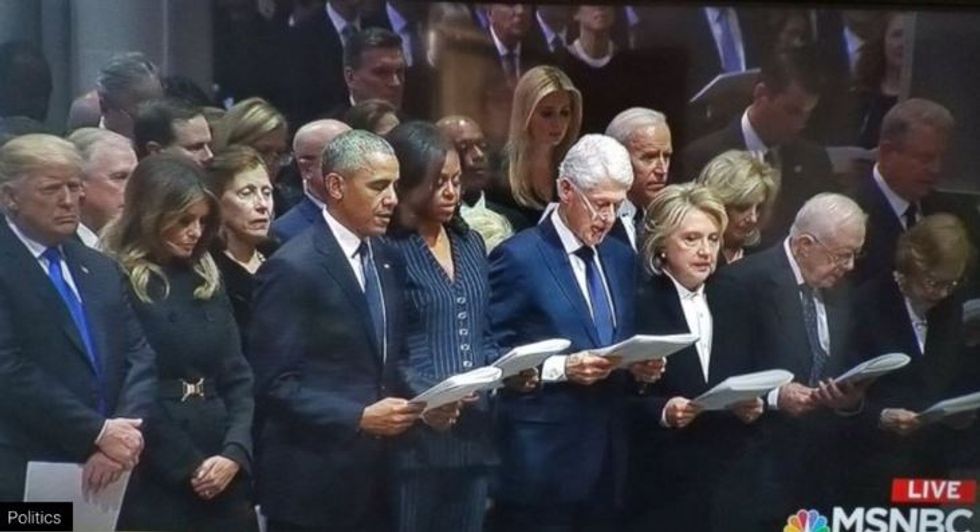 President Donald Trump has separated children from their families, has shut asylum seekers out of the border, and has said he doesn't ask for forgiveness. Nevertheless, the President still maintains 71% of white Evangelical support.

While that base has remained steadfast in its support of Donald Trump, that hasn't stopped others from pointing out the times his actions go against the Evangelical perception of what it means to be Christian.

This happened most recently at the funeral for former President George H.W. Bush on Wednesday. When the row of former first families seated in the same row as the President began reciting the Apostles' Creed, Trump notably abstained.

Twitter noticed, and users pointed out the contradiction immediately.

@realDonaldTrump Like a true Evangelical Christian, you were disinterested in prayer & hymns. You may have the alt-… https://t.co/qJxbIvgfBZ
— Deb (@Deb) 1544035337.0

Claiming to be an Evangelical hero but refusing to even read the Apostle's Creed at a state funeral wasn't the only thing Twitter users called Trump out on.

While in the throes of the birth certificate conspiracy theory, Trump said of Obama:

"He doesn't have a birth certificate. He may have one, but there's something on that, maybe religion, maybe it says he is a Muslim. I don't know. Maybe he doesn't want that."

Many pointed out that even the so-called Muslim President was saying the prayer.

While it's possible that Trump doesn't know the Apostle's Creed by heart, people rightly noted that pamphlets with the words were provided, and many of the former leaders in the row beside him chose to read instead of recite. As for why the President didn't use the words provided as a guide, some Americans had an interesting theory.

The white Evangelical base is not likely to turn on Trump for declining to pray, but others are refusing to let them ignore it.