Republicans Announced Their Plan for Brett Kavanaugh and His Accuser to Testify Next Week, and Democrats Are Crying Foul 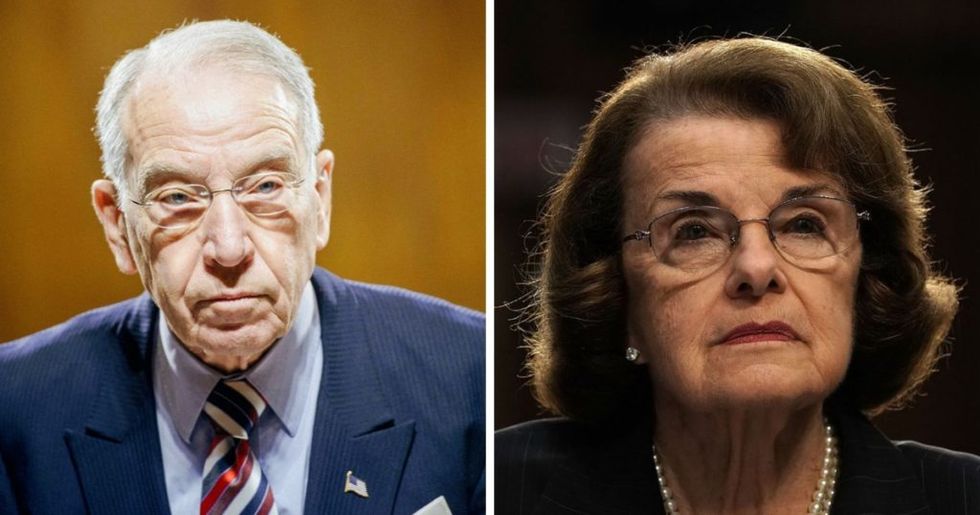 The decision by Republicans to hold a public hearing into the sexual assault accusation regarding Supreme Court nominee Brett Kavanaugh has Democrats crying foul now that Republicans have indicated only Kavanaugh and Christine Blasey Ford, the Stanford University professor who accused him of assaulting her in the 1980s, will be present. Democrats said they need to hear from a Kavanaugh classmate who Ford said was present during the attack and that the FBI needs to reopen its background check of Kavanaugh to investigate Ford's allegation and interview possible witnesses.

"What about individuals who were previously told about this incident? What about experts who can speak to the effects of this kind of trauma on a victim?" said top Judiciary Committee Democrat Dianne Feinstein (CA), who wants to hear from Kavanaugh’s classmate, Mark Judge, who Ford said was present during the alleged assault. Feinstein further accused Republicans of trying to "rush" the nomination process.

"What about individuals who were previously told about this incident? What about experts who can speak to the effects of this kind of trauma on a victim?" said Feinstein.

Referencing the Supreme Court confirmation hearing in which Justice Clarence Thomas was accused of sexually harassing Anita Hill when he was her supervisor at the United States Department of Education and the Equal Employment Opportunity Commission, Feinstein said: "Compare that to the 22 witnesses at the 1991 Anita Hill hearing and it’s impossible to take this process seriously."

Dick Durbin, the Democratic senator from Illinois, concurred, saying Mark Judge is "identified specifically as an eyewitness” and should testify.

“His simple denial is not the end of the questioning,” Durbin told reporters. “If he appears under oath there are questions that will be asked, I am sure.”

Senate Minority Leader Chuck Schumer also doubled down on the call for the FBI to reopen its background check of Kavanaugh. In a series of tweets, Schumer said the White House "has intentionally chosen to bury its head in the sand and make weak excuses" for a nominee President Donald Trump has thrown his full support behind.

Instead of having the FBI investigate these serious allegations as part of the standard background investigation pr… https://t.co/nkW3dLg10T
— Chuck Schumer (@Chuck Schumer) 1537238044.0

We need the FBI to step forward and ensure that the Senate and American public have complete information about this… https://t.co/HKEf0zts1b
— Chuck Schumer (@Chuck Schumer) 1537238044.0

The White House understands very well that we aren’t asking to open a criminal investigation, but to have the FBI r… https://t.co/VVMHcT9hZa
— Chuck Schumer (@Chuck Schumer) 1537238045.0

Indeed, President Trump said he remains "totally supportive" of Kavanaugh, and believes, although he hasn't spoken with him personally about the accusation, that "he can handle himself better than anybody, he’s a very outstanding guy."

Trump further stressed that the FBI should not investigate the matter.

“I don’t think the FBI should be involved because they don’t want to be involved, if they wanted to be I would certainly do that," Trump said. "This is not really their thing. The senators will do a good job."

Nevertheless, many have joined the call for a fair(er) hearing. Among them: Senator Kamala Harris, who also cited the Anita Hill hearing and said "it is imperative that we hear from the other witnesses."

Two things are clear: the White House needs to direct the FBI to re-open the background check before the Kavanaugh… https://t.co/3jAeeAfN4F
— Kamala Harris (@Kamala Harris) 1537287594.0

This is not acceptable. When is the @FBI going to do the investigation? AFTER the hearing? That would be ridiculous… https://t.co/Ek5jvwQrkg
— Sheldon Whitehouse (@Sheldon Whitehouse) 1537290742.0

Asked if he would support the FBI investigating Kavanaugh allegation, Trump says, “It wouldn’t bother me... other t… https://t.co/CEpS0zRG8s
— Peter Alexander (@Peter Alexander) 1537297763.0

Why not have the FBI look into Kavanaugh accusations? "It wouldn't bother me" other than that the FBI says it isn't… https://t.co/Jg01rMxNJU
— Jennifer Epstein (@Jennifer Epstein) 1537297445.0

Senate Judiciary Chairman Chuck Grassley (R-IA) scheduled the hearing for September 24. He told conservative radio host Hugh Hewitt that Republicans held a phone call with Kavanaugh yesterday to discuss the allegations. He said Democrats were invited to participate but did not.

“I have full confidence in Chairman Grassley to lead the committee through the sensitive and highly irregular situation in which the Democrats’ tactics have left all of us,” he said.

Yesterday, McConnell took to the Senate floor to decry what he claims is a Democrat-led conspiracy to torpedo Brett Kavanaugh’s Supreme Court nomination in the wake of sexual assault allegations.

“Now, [an] accusation of 36-year-old misconduct dating back to high school has been brought forward at the last minute in an irregular manner. It is an accusation which Judge Kavanaugh has completely and unequivocally denied,” McConnell said, adding:

“This is what he [Kavanaugh] said: ‘This is a completely false allegation. I’ve never done anything like what the accuser describes to her or to anyone.’

It is an accusation which the ranking member of the Committee for Jurisdiction [Dianne Feinstein] has known about for at least six weeks. Known about for six weeks––yet chose to keep secret until the 11th hour.”

.@SenateMajLdr McConnell is on the Senate floor making a case that the Kavanaugh allegation is the result of a cons… https://t.co/1xeFParXYP
— Aaron Rupar (@Aaron Rupar) 1537213530.0

In truth, Ford had sent a letter to Feinstein and anonymously tipped off the Washington Post back in July, but had requested that her identity remain a secret, citing fears of what publicity might mean for her and her family amid the task of having to rehash the assault in the public eye. Feinstein chose to honor Ford's request for anonymity. Ford only came forward after The Interceptreported that Feinstein had a letter describing an incident involving Kavanaugh and a woman while they were in high school in her possession and was refusing to share it with her colleagues.