Chuck Schumer Just Used Mitch McConnell's Own Words Against Him in Response to Anthony Kennedy's Retirement, and Democrats Are Joining In 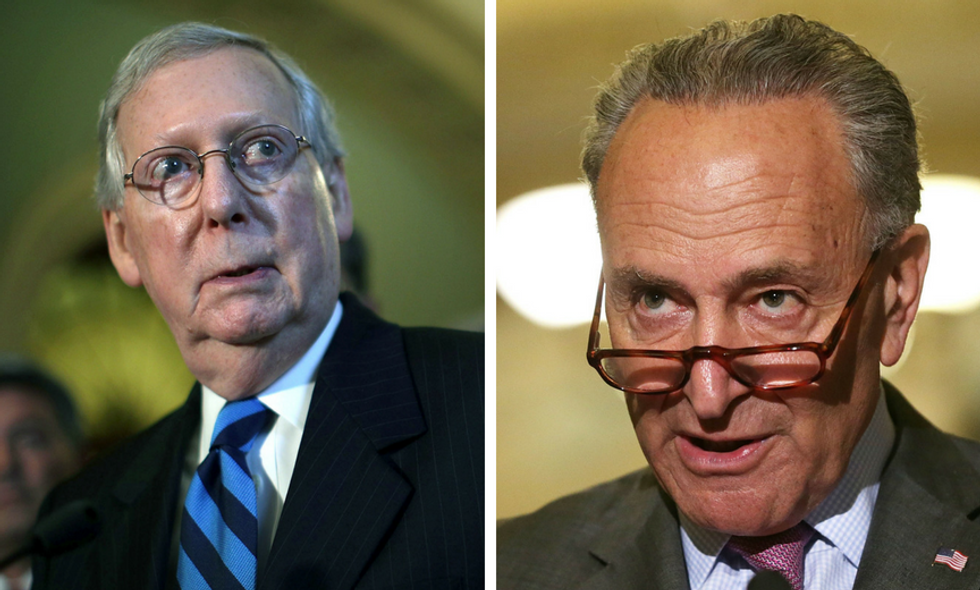 Earlier on Wednesday, Justice Anthony Kennedy, who is widely seen as a swing vote on the Supreme Court, announced his retirement, effective July 31.

This vacancy will provide President Donald Trump with a second opportunity to fill a spot on the court, which is leading many to wonder how Democrats should handle whatever nomination Donald Trump puts forward for the seat, particularly after Mitch McConnell used the fact that 2016 was an election year to block Barack Obama's pick to succeed Antonin Scalia on the court.

McConnell after Scalia's death: “The American people should have a voice in the selection of their next Supreme Co… https://t.co/eWLKC0h1vc
— igorvolsky (@igorvolsky) 1530125891.0

So now that McConnell is calling for fairness in the treatment of Trump's impending nominee to the Court, insisting that there will be a vote in the fall, Democrats are using McConnell's own words against him.

As Senate Minority Leader Chuck Schumer said on the floor of the Senate:

"Our Republican colleagues in the Senate should follow the rule they set in 2016: Not to consider a Supreme Court justice in an election year."

The American people should have a voice in the selection of their next Supreme Court Justice. #Kennedy https://t.co/TAgp0yzPeX
— Tammy Duckworth (@Tammy Duckworth) 1530124274.0

My statement on the retirement of Justice Kennedy. “The American people should have a voice in the selection of th… https://t.co/0bQjabn8eN
— Ted Lieu (@Ted Lieu) 1530126083.0

Given the stakes of this Supreme Court seat, which will determine the fate of fundamental constitutional rights, th… https://t.co/zyRPagF37j
— Kamala Harris (@Kamala Harris) 1530127380.0

The President just said the next Supreme Court nominee WILL come from his list of 25 judges that passed his overtur… https://t.co/B43VL4jKq8
— Kirsten Gillibrand (@Kirsten Gillibrand) 1530127610.0

Durbin wants to wait until after midterms for Kennedy replacement. “McConnell set the new standard by giving the Am… https://t.co/pjQzyCF5bo
— Manu Raju (@Manu Raju) 1530126294.0

Feinstein: "There should be no consideration of a Supreme Court nominee until the American people have a chance to… https://t.co/SJKJFJckvu
— Kyle Griffin (@Kyle Griffin) 1530130809.0

But some are skeptical:

After all, Democrats would need 2 Republicans to defect and join them in blocking Trump's nominee.

Although perhaps there is a path...

So there it is: McConnell says nominee will get a vote in the fall. Schumer says no nominee should be considered… https://t.co/DaId39pot6
— Phil Mattingly (@Phil Mattingly) 1530127417.0

So far, however, Republicans are perfectly willing to throw the McConnell rule out the window when it serves them: