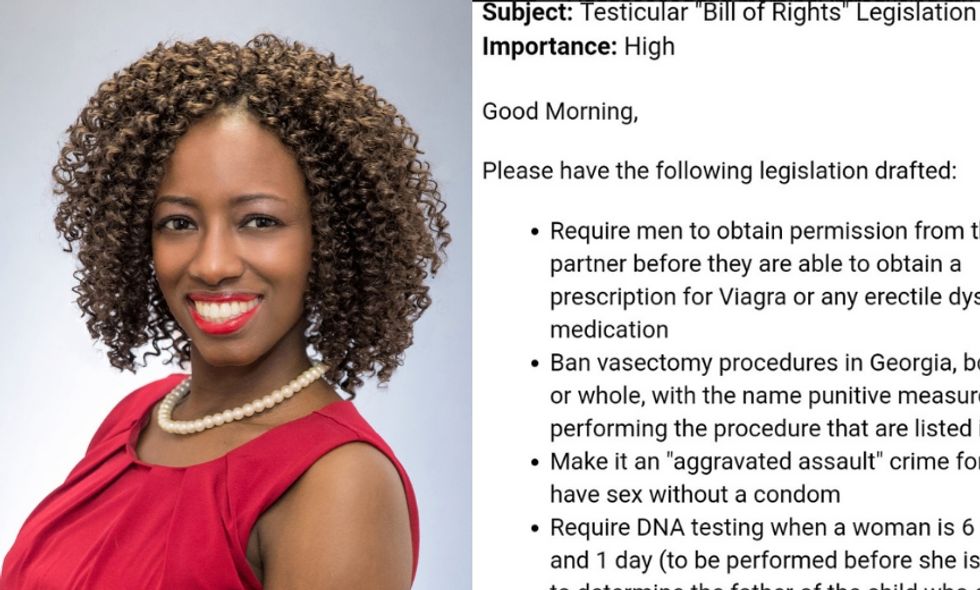 Georgia State Rep Dar'shun Kendrik wants to introduce a "Testicular Bill of Rights" bill, and we're here for it.

Georgia recently approved legislation to outlaw abortion after fetal heartbeat is detected, which generally occurs at about 6 weeks - sometimes before the woman even knows she's pregnant.

Kendrick calls the law the "Women’s Womb Takeover" bill, and wants to drive the point home by introducing similar legislation on men's bodies.

Her suggested bill would require men to get permission from their sex partner before they're able to get Viagra, prosecute vasectomy procedures, require the father to immediately begin paying child support upon detection of fetal heartbeat, and make it an "aggravated assault" for men to have sex without a condom.

"You want some regulation of bodies and choice?" Kendrick tweeted. "Done!"

Kendrick says she posted the 'Testicular Bill of Rights' "to show the absurdity when a woman tries to regulate a man’s body like HB 481 and other anti-choice bills are doing in regulating women’s bodies."

"Whether I actually file my “testicular bill of rights” or not, I will continue to work with the Senate to try to stop this heinous, unconstitutional measure that attacks women’s core rights to privacy and family planning," says Kendrick.

The bill may be tongue in cheek, but the impetus behind it is not. "I agree it’s not a laughing matter," Kendrick says. "But neither is the government telling me when I must have a child."