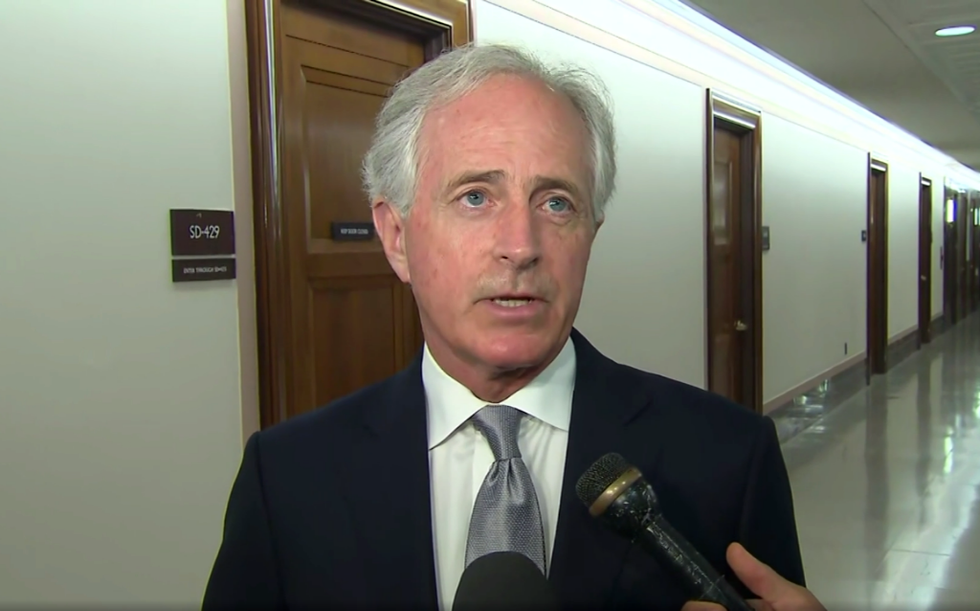 Republican Sen. Corker says the Trump admiration wakes up every day and makes stuff up as they go along, “with no c… https://t.co/JBBYdUaLjq
— The Lead CNN (@The Lead CNN) 1528907575.0

Senator Bob Corker of Tennessee is part of a very small group within the Republican Party currently serving in congress; those willing to criticize President Donald Trump. But Corker is part of another GOP group too; those not seeking reelection.

Wednesday, Corker opted to call out his colleagues for their unwillingness to contradict the president even in matters they all agree are wrong, like Trump's trade wars he provoked with United States allies.

We're in a strange place. It's becoming a cultish thing, isn't it? It's not a good place for any party to have a cult-like situation as it relates to a President that happens to be purportedly of the same party."

On Tuesday, Corker gave a speech on the Senate floor accusing his fellow Republicans of inaction because they're too concerned "we might poke the bear!" GOP senators have pointed fingers at each other for blocking the other's amendments and denying them votes.

Corker said Wednesday his comments don't apply to all Republicans, but "leadership in general" won't stand up to Trump "because it's all about the next election."

There's no question that leadership in general is weary of doing anything that might upset the President. It would be unfair to try to say this about every member, that's not appropriate."

But Corker says the Trump administration lacks stability and direction. He thinks confronting Trump might force his team to examine decisions more closely instead of acting on whims of the moment.

To have an administration that wakes up every day on an ad hoc basis just making stuff up as they go along with no coherency to it -- I think us having to weigh in on that would actually cause them to have to think about what they're doing versus, 'Well, I'm upset with X today so I'll do this'."

Corker pointed out other issues as well.

Senate Republicans plan to work through most of the August recess. Senate GOP leadership claims it's due to Democratic obstruction. But Corker says there is another reason: keep Trump happy.

Trump complained the Senate should not recess until all his goals were met.

The Senate should get funding done before the August break, or NOT GO HOME. Wall and Border Security should be incl… https://t.co/lo4MsSrbCH
— Donald J. Trump (@Donald J. Trump) 1526163616.0

The president praised Senate Majority Leader Mitch McConnell, someone he ridiculed previously, for the decision not to recess.

But Corker claims McConnell is not behind that decision.

I mean we're going to be here during recess, generally speaking, you know which is fine with me, but it's more about Trump being upset than it is anything else."

But keeping Trump happy does seem to affect reelection chances, if one believes the president's tweets about his influence on the South Carolina Republican primary between incumbent Mark Sanford and Katie Arrington.

In the last hours of voting, Trump torpedoed Sanford. Wednesday he all but stated he was the reason Sanford lost his bid to gain the GOP nomination.

This is Trump's party. Boehner said it. We've all felt it. It was reiterated last night. If you want to win a Republican primary, you can't deviate much from the script. It's the President's script. You can't criticize policy or behavior."

Republican leaders disagree, of course. They state they confront and contradict Trump when appropriate.

Trump has not yet responded to Corker's comments, like he has in the past, but the Twittersphere has. Some even responded directly to the president about the cult of Trump.

@realDonaldTrump @kevincramer We certainly don’t need another Republican in the Senate. You have ruined the Republi… https://t.co/9SIQ6UeepD
— Christine McKeon (@Christine McKeon) 1528925036.0