CNN's Jake Tapper Is Having None of Trump's Conspiracies 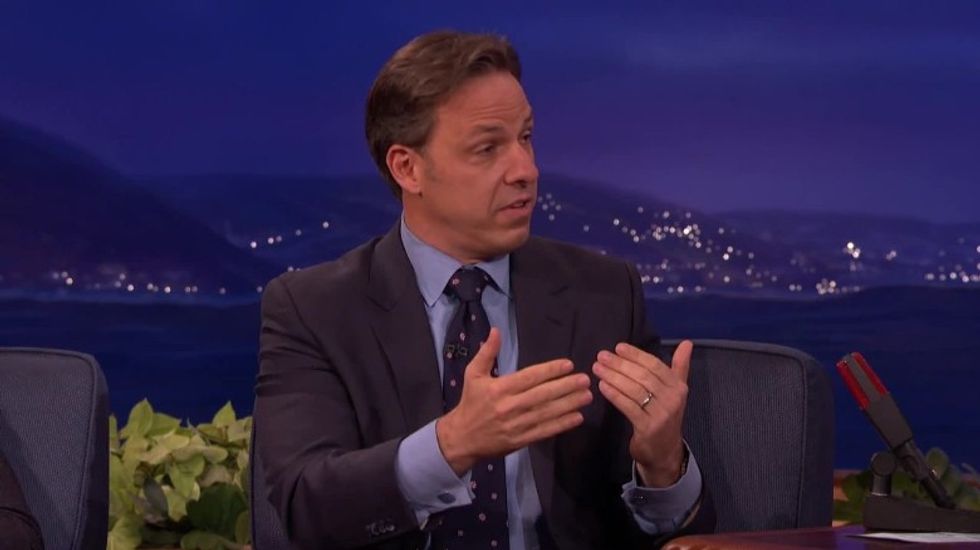 During an appearance on Conan, CNN's Jake Tapper gave a blistering review of President Donald Trump and his staff over the three weeks since his inauguration.

"The president seems to thrive on chaos," Tapper told host Conan O' Brien on Tuesday's episode. "It was like that during the campaign. That obviously worked. And it’s like that now." Noting the president's prior stint as a host on reality television, Tapper said Trump "seems to like different competing groups of power competing against each other... Obviously, The Apprentice was like that as well."

Tapper also spoke of Trump in unusually blunt terms in an earlier appearance on The Lead.  Tapper admonished Trump for the lengths he has taken to discredit "mainstream" media outlets––while embracing conspiracy theories. For example, Tapper noted, on Tuesday Trump sent the following tweet from his personal Twitter account. His message was a response to a New York Times report which revealed that phone records and intercepted calls of U.S. intelligence agencies show that members of his presidential campaign had repeated communication with senior Russian intelligence officials in the year before the election.

Tapper took Trump to task. "Of course, these stories in the New York Times, the Washington Post, CNN and elsewhere are not conspiracy theories. These are news stories sourced by government officials," he said. "Conspiracy theories are different. They're false. They're crackpot. They're nonsense."

Tapper then went on to review several conspiracy theories Trump has promoted.

In the past, Trump perpetuated the long-standing rumors and conspiracy theories that have accused former President Barack Obama himself of not being an American citizen, despite incontrovertible evidence to the contrary. This fact did not escape one of his critics:

.@realDonaldTrump I don't think you're in a good position to accuse others of promoting conspiracy theories. https://t.co/xbAkoEgR4d
— Simon Hedlin (@Simon Hedlin) 1487163777.0

During his presidential campaign Trump also accused Texas Senator Ted Cruz's father (a Cuban immigrant) of helping Lee Harvey Oswald, the assassin of former President John F. Kennedy. “His father was with Lee Harvey Oswald prior to Oswald's being — you know, shot. I mean, the whole thing is ridiculous,” Trump said at the time. What is this, right prior to his being shot, and nobody even brings it up. They don't even talk about that. That was reported, and nobody talks about it. “I mean, what was he doing — what was he doing with Lee Harvey Oswald shortly before the death? Before the shooting? It's horrible."

Trump has also continuously dismissed the assessment from U.S. intelligence that it was confident that Russia was behind the hacks, a belief he expounded upon in an interview with TIME, in which he suggested that the conclusion of Russian interference was politically motivated. As expected, he has not backed down from this claim. Yesterday, he tweeted the following message after CNN and other outlets were able to corroborate the New York Times' bombshell report:

This Russian connection non-sense is merely an attempt to cover-up the many mistakes made in Hillary Clinton's losing campaign.
— Donald J. Trump (@Donald J. Trump) 1487160492.0

"I think we can all agree that we’re not used to this level of confusion and chaos and different messages coming from the White House, from the president," Tapper told Conan O'Brien. "I like news. This is exhausting, though."

Tapper also brought up his recent clashes with Kellyanne Conway, counselor to the president, who defended Trump's false claim that murder rates are the highest they've been in years and his belief that the media does not cover acts of terrorism. "Facts and truths are not partisan," Tapper said. "Republicans and Democrats and independents, there are just empirical facts. And we want presidents to tell the truth. There’s just empirical lies that the president was telling."