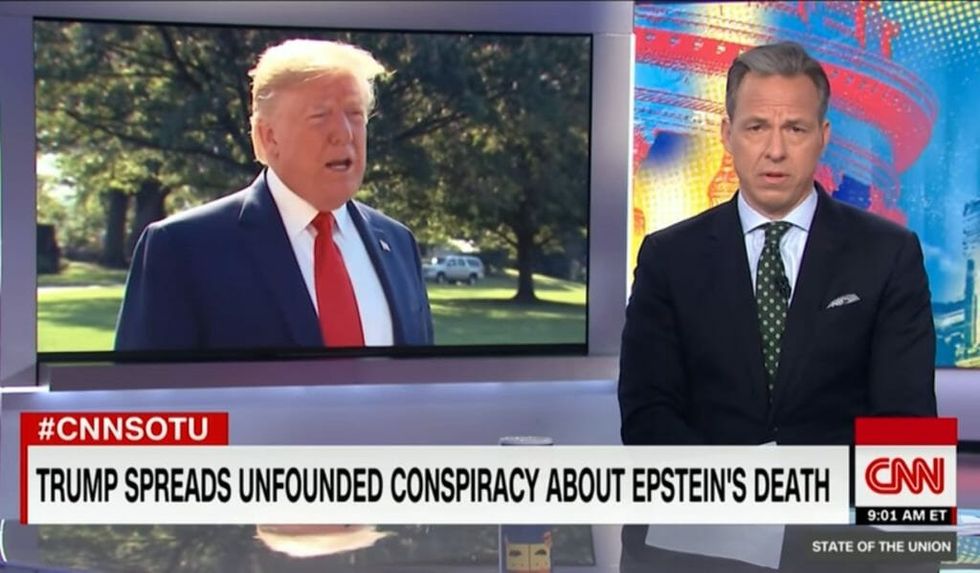 Federal jails fall under the jurisdiction of the Department of Justice which falls under the authority of Attorney General William Barr who was appointed by President Donald Trump. So when a federal prisoner—with potentially damaging information about numerous powerful people—who's supposed to be on 24/7 suicide watch after a prior attempt commits suicide in federal custody, the most logical explanation is that former President Bill Clinton and Secretary Hillary Clinton did it.

Or at least that's the story right wing conspiracy theorists are pushing. As well as the person ultimately responsible for maintaining the safety of federal prisoners, Donald Trump.

As @realDonaldTrump suggests the Clintons murdered Epstein, I feel it necessary to point out that Epstein died in a… https://t.co/l9qKTM65h4
— David Cicilline (@David Cicilline) 1565552619.0

After Epstein's reported suicide Friday night at a federal jail in Manhattan, President Trump retweeted conspiracy theories implicating the Clintons in Epstein's death—a move which had many crying foul including CNN's Jake Tapper.

On CNN's State of the Union, Tapper called out Trump for using his international social media platform to amplify conspiracy theories about former political rivals to his over 62 million followers.

"The state of our union is appalled. We begin this morning with a retweet from the President of the United States."

"Not a message about healing or uniting the country one week after two horrifying massacres, not about the victims of those tragedies. Instead President Trump using his massive Twitter platform to spread a deranged conspiracy theory tying the death of pedophile Jeffrey Epstein in prison to the President's former political rivals, the Clintons."

"[The President] could use his megaphone for anything. But the president often uses it to amplify that which is the worst of us: personal attacks, bigotry and insane conspiracy theories."

A spokesperson for President Clinton responded to Trump's retweet and stated:

"Ridiculous and not true and Donald Trump knows it. Has he triggered the 25th Amendment yet?"

The 25th amendment allows for the removal of a sitting President deemed unfit for office due to physical or mental impairment.

Tapper was far from alone in expressing disgust over the President's Twitter choices.

Trump tweeted out a conspiracy theory just hours after Epstein's death, but when it came to Charlottesville, he wan… https://t.co/ferQkYkzUg
— Bill Grueskin (@Bill Grueskin) 1565612852.0

The tweet Trump shared provides zero evidence or basis for the claim. It included the hashtags #ClintonBodyCount and #ClintonCrimeFamily along with photos of Epstein and the Clintons.

all these conspiracy theories and we’re zeroing in on the one where Trump accidentally killed Epstein through burea… https://t.co/QDJUhYNiaY
— Matt Pearce 🦅 (@Matt Pearce 🦅) 1565578147.0

Jeffrey Epstein also frequented Mar-a-Lago and was filmed and photographed with Trump numerous times. Neither set of photos prove anything beyond Epstein attended fundraisers or socialized with many rich and powerful people.

Neither Clinton nor Trump are implicated in the Epstein indictment but- If Clinton was found to have abused girls… https://t.co/5Q8flRWraw
— John Fugelsang (@John Fugelsang) 1565545411.0