Cindy McCain Just Explained Why She Didn't Invite Donald Trump to John McCain's Funeral, and We Get It 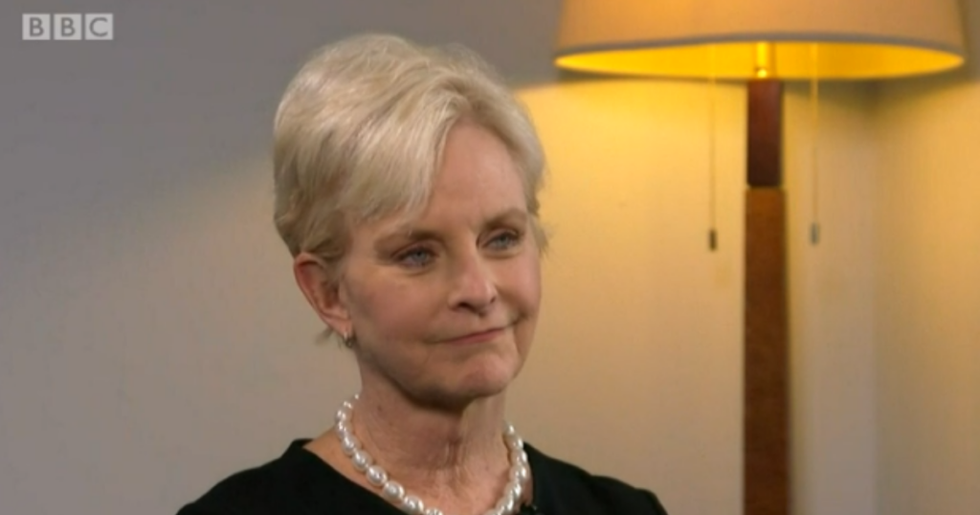 Cindy McCain, the widow of the late Senator John McCain (R-AZ), tore into President Donald Trump for his disrespectful treatment of her husband and explained why Trump was excluded from McCain's funeral in August.

When asked about Donald Trump's conspicuous absence from the funeral, Mrs. McCain told the BBC:

“Even though it was a very public funeral, we are still a family. And for all of us, and for the sake of my own children, I didn't want any disruption. This was about John, not about anything else at all, and our country. It was important to me that we kept it respectful and calm and not politicize it. Sounding funny coming from a political family in a political country, but it was important that we kept it with dignity."

Understandably, Mrs. McCain still begrudges Trump for his insistence that her husband was not a war hero.

“He’s not a war hero,” Trump grumbled at the Family Leadership Summit in 2015. “He was a war hero because he was captured. I like people who weren’t captured.”

Mrs. McCain said Trump's remarks were demeaning toward her family and to all veterans.

“I thought it was inappropriate and wrong, I really did. It hurt the family too,” Mrs. McCain said. “And he hurt the other men that served with John and were in prison as well. It wasn’t just about John, it was all the other people. I think that was a wrong thing to say and I don’t think I’ll ever get over it.”

From the reactions on social media, it's safe to say history will be on Mrs. McCain's side.

Trump did not attend McCain's funeral, however, his daughter Ivanka and her husband Jared Kushner, along with White House Chief of Staff John Kelly and Defense Secretary Jim Mattis, showed up to pay their respects.

Twitter thinks the memorial service would have been better without the presence of anyone named Trump.

Earlier in the interview, Mrs. McCain shared her thoughts on Trump's political future and whether or not he can win her support.

Asked by Yalda Akim if she plans on voting for Trump in 2020, Mrs. McCain expressed doubt over Trump's candidacy and did not commit to rallying behind the president.

"You know, I don’t even know if Trump is going to run and I don’t believe he is sure he is going to run,” Mrs. McCain said. "I have no inside track on this, I just hear what I hear."

“At this point," she added, "I’d like to see some softening of the rhetoric, I really would. It’s hurtful."

The beer heiress is far from alone in refusing to pledge support for Trump's presumed race for reelection.

Though some wonder how Mrs. McCain could even consider voting for Trump after the way he treated her husband.

@Newsweek The fact that #CindyMcCain won't even commit to NOT voting for #Trump tells the world how all-invasive th… https://t.co/WFrSvn5w5G
— Eugene Eugenius (@Eugene Eugenius) 1542815996.0

@Newsweek To vote for him would be to spit on the grave of her husband. And Lindsey Graham has done enough of that.
— Mom account (@Mom account) 1542825068.0

@Newsweek @cindymccain ~ My Dear Sweet Lady, HOW can you even contemplate voting for Donald Trump? Hasn’t he caus… https://t.co/gGQwYBQmmg
— Dianna Maria (@Dianna Maria) 1542823600.0

@Newsweek Anyone who said those things about her husband should not warrant anything other than a solid rebuke.
— Robin (@Robin) 1542822812.0

McCain - a long-time Senator and the 2008 Republican presidential candidate - was “truly the conscience of the Senate," Mrs. McCain remarked, "and I think in many ways the conscience of the country. People recognized him for his ability to work across the aisle…and his willingness to debate but not demean as a result of differences."

“I believe we have lost those ideals right now forever,” she said.