Someone needs a thesaurus. 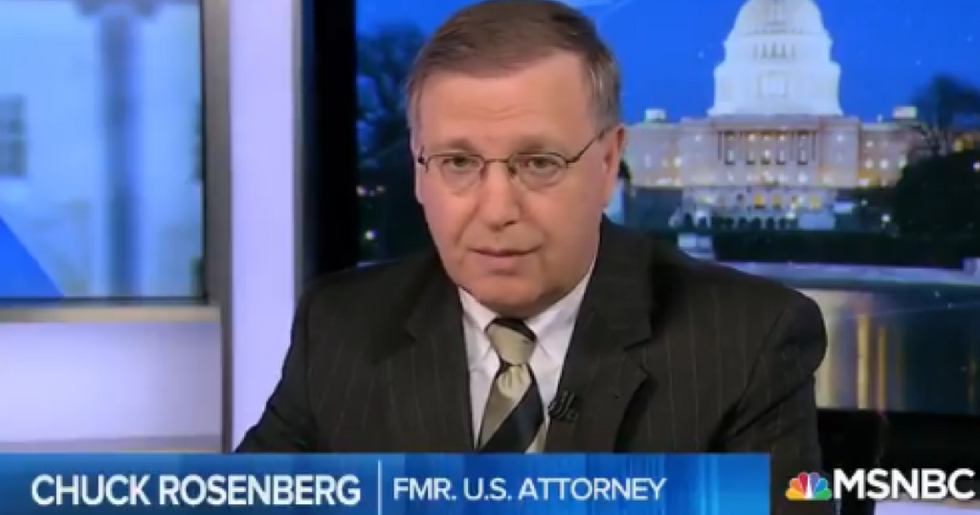 Former FBI chief of staff and U.S. Attorney Chuck Rosenberg said that "collusion" is "absolutely a crime" during an interview on Meet the Press Daily Monday afternoon. Rosenberg's remarks countered those of Rudy Giuliani and President Trump himself who have spent the past couple of days insisting that "collusion is not a crime."

"Collusion is a crime. We just happen to call it something else, we call it conspiracy, but it is absolutely a crime."

Rosenberg served under former FBI Director James Comey, whom Trump fired in May of 2017. This led to the appointment of Special Counsel Robert Mueller and his investigation into possible obstruction of justice by Trump for Comey's firing. Mueller is also probing whether Trump's campaign participated in a criminal conspiracy with Russian intelligence to sway the 2016 presidential election.

"You probably won’t find the crime bank heist in the criminal code but bank robbery is a crime too, and so I am sort of perplexed that it has come down to synonyms," Rosenberg explained. He said that "collusion" is actually a crime - "conspiracy."

Rosenberg then tore into Giuliani's attempt to confuse the public with "synonyms."

"If these folks don’t know that collusion and conspiracy are synonyms for one another and this is a legal strategy," Rosenberg added, "then they might want to consider changing horses in this race."

Earlier in the day on Monday, Giuliani made the media rounds giving borderline incoherent defenses of the president.

"I have been sitting here looking in the federal code trying to find collusion as a crime," Giuliani said on Fox & Friends. "Collusion is not a crime."

There is no statute covering "colluding" with a foreign power, but it is illegal to conspire to violate laws agains… https://t.co/IOBl8cJ7cM
— Kyle Griffin (@Kyle Griffin) 1532971211.0

Giuliani later added: "My client didn't do it, and even if he did it, it's not a crime."

"I don't even know if that's a crime, colluding about Russians," the former New York City mayor said before switching gears to the cyber attack on the 2016 election. "You start analyzing the crime — the hacking is the crime. The president didn't hack. He didn’t pay them for hacking."

Collusion is not a crime, but that doesn’t matter because there was No Collusion (except by Crooked Hillary and the Democrats)!
— Donald J. Trump (@Donald J. Trump) 1533038338.0

Lest we forget - candidate Trump explicitly asked Russia to hack into the DNC server and to try and dig up Hillary Clinton's emails.

That same night, July 27, 2017, DNC servers were breached and emails between Clinton campaign officials were leaked to the press by Wikileaks.

Incidentally, Trump's former campaign manager Paul Manafort's trial begins today. One of the charges Manafort is facing is "conspiracy against the United States."

WATCH: Former Senior FBI Official Chuck Rosenberg says, "collusion is a crime. We just happen to call it something… https://t.co/NDEXsYHQwU
— Meet the Press (@Meet the Press) 1533000722.0

Twitter had its way with Giuliani and his foundering legal spin.

"He knows it's nearly over."

@MeetThePress @morgfair Look, Guiliani knows its nearly over. He will go down with the ship, which is taking on water rapidly.
— Rad rants (@Rad rants) 1532994345.0

Further complicating matters for the president and his frenetic legal strategy is his former lawyer and fixer, Michael Cohen, who alleged last week that Trump knew about the June 2016 meeting in Trump Tower between Manafort, Jared Kushner, Donald Trump Jr., and several Russian-connected operatives.

A former Trump Organization executive also alluded to this possibility, telling Anderson Cooper on Monday that it would be "impossible, in my opinion, based on my experience working with Trump and everybody that worked with Trump," that Trump didn't know the people running his campaign were meeting with Russians who had promised them dirt on Clinton.

"Something major, something newsworthy, something press-worthy would always go before Trump," Barbara Res, who oversaw the construction of Trump Tower, said.