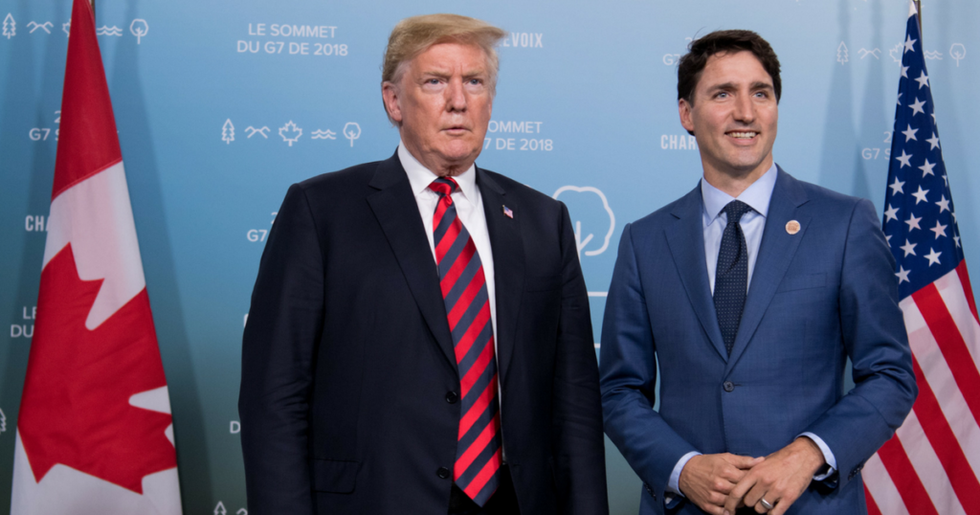 As Canadians celebrated Canada Day, Americans took to Twitter to apologize for the unpredictable and erratic behavior of U.S. President Donald Trump.

Canada Day is celebrated on July 1 every year and is Canada's national holiday commemorating the Constitution Act, which unified the three separate colonies of the Province of Canada, Nova Scotia, and New Brunswick into a single Dominion within the British Empire called Canada. Originally called Dominion Day, it was renamed in 1982 with the passage of the Canada Day act, which established the date as a federal holiday.

Americans joined our northern neighbors in their celebrations, offering apologies on behalf of the American people for Trump's embarrassing treatment of our allies. The hashtag #CanadaDay trended throughout the day on Sunday.

"Thank you for bearing with us," one user wrote.

This got a heartfelt response from one Canadian citizen, who said that "Canadians know that the US as a whole does not support the current political climate of your country."

@andylassner Canadians know that the US as a whole does not support the current political climate of your country,… https://t.co/vLUO2EkQdg
— Chad (@Chad) 1530448669.0

The American people are "proud to call you friends," Canada, even if our president doesn't see it that way.

Squidward peering out at Spongebob and Patrick perfectly captured the "sad American" motif many are experiencing in these unusual times.

Others burned Trump by calling him a "con-man."

Still others asked Canadians to "forgive us" Americans as we go through a "fascist rage punk phase."

But in the end, we have to have hope. "We will fix this."

Americans are certainly not going to capitulate to Trump's threats to his critics, who he said on Sunday should "take it easy."

Earlier today, the president once again railed against his critics.

"Canada's workers build the roads and bridges that get us to work on time and back home again. They put food on the table for families from coast to coast to coast. Some are young people starting their career, or newcomers bringing fresh talent to the workforce," Trudeau wrote.

"From Ontario steel to Quebec aluminum, from agriculture and the energy sector in the Prairies and the North, to forestry in British Columbia and fisheries in the Atlantic, Canadians get the job done — and build our communities along the way."

Last month, Trump imposed a 25 percent tariff on Canadian steel and aluminum and lambasted Canada and other U.S. allies at the annual G7 summit, which was held in Canada.