Turns Out You Can Already Pre-Order a Commemorative Coin Featuring Brett Kavanaugh From the White House Gift Shop, and People Are Not OK

Getting a little ahead of themselves, aren't they? 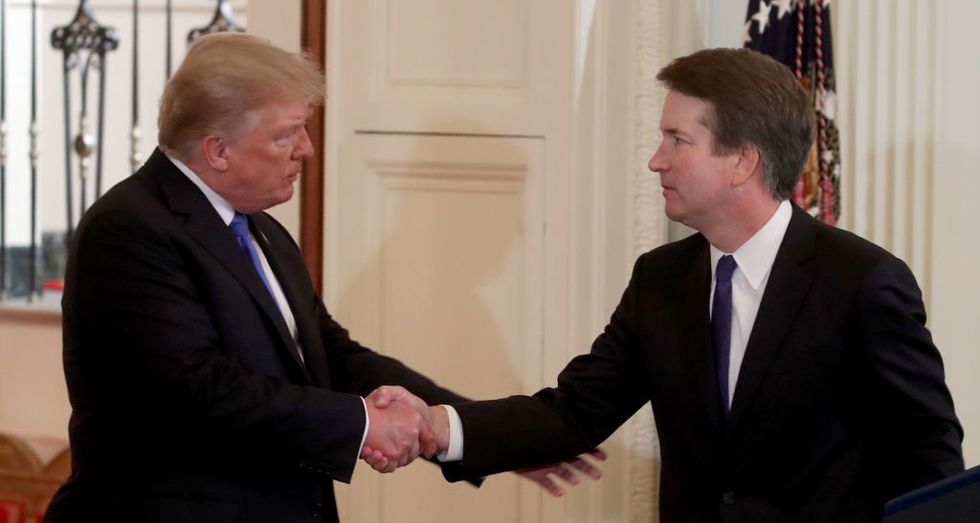 WASHINGTON, DC - JULY 09: U.S. President Donald Trump introduces U.S. Circuit Judge Brett M. Kavanaugh as his nominee to the United States Supreme Court during an event in the East Room of the White House July 9, 2018 in Washington, DC. Pending confirmation by the U.S. Senate, Judge Kavanaugh would succeed Associate Justice Anthony Kennedy, 81, who is retiring after 30 years of service on the high court. (Photo by Mark Wilson/Getty Images)

Brett Kavanaugh, the embattled Supreme Court nominee accused of sexually assaulting Dr. Christine Blasey Ford and several other women, has not yet been confirmed to the Supreme Court. But you can already pre-order a commemorative coin with his name on it. The coin celebrates "constitutionalism," has a 24-karat gold finish, and also commemorates Justice Neil Gorsuch, who was confirmed last year. And this coin can be yours for, oh, a measly $175.

Just check out this listing from the White House Gift Shop:

The coin doesn't exist yet, but to many, its creation represents the Trump administration's hubris, and it's opened both Kavanaugh and the administration to harsh criticism.

@voxdotcom @skennison No thanks, I don’t need any memorabilia commemorating an abuser of women.
— Leigh Crosby (@Leigh Crosby) 1538660752.0

The White House courted controversy earlier this year after President Donald Trump was scheduled to meet with North Korean leader Kim Jong Un in May. The U.S. military released a commemorative "challenge" coin to commemorate the meeting, the first between a North Korean leader and a U.S. president, even though the occasion had not technically happened yet. Then Trump canceled the event, rendering the coins an odd artifact as the two nations traded jabs for several weeks until they eventually met in June to a mixed reception. (Oh, and you can still buy those Trump-Kim coins by the way.)

Oddly enough, the White House Gift Shop is not affiliated with the White House at all. It was first created by President Harry Truman, and it existed under different names, including the White House Flower Fund and the White House Police Benefit Fund, and the money from sales of presidential memorabilia and other souvenirs would go to the families of Secret Service members who were injured or killed while on duty.

As writer Rebecca Jennings notes in a piece for Vox:

As recently as a decade ago, the gift shop appears to have been run by an organization called the United States Secret Service Uniformed Division Benefit Fund, but in 2011 it signed a contract with a company called Giannini Strategic Enterprises to run the shop on the fund’s behalf. When the fund liquidated itself in 2013, the gift shop was wholly transferred to Giannini.

It’s run by a man named Anthony Giannini, who did not respond to repeated requests for an interview. He’s currently the CEO of the White House Gift Shop and runs both businesses out of an office in Lancaster County, Pennsylvania. And no, there’s not an actual store, in the White House or anywhere else, where you can buy the stuff shown online.

She also explains just how the business is allowed to operate despite not being affiliated with the White House:

So how is Giannini allowed to run a company with the very misleading and official-sounding “White House” in the title? Well, at first, he couldn’t. According to Talking Points Memo, when Giannini first applied to trademark the name at the US Patent Trademark Office, his request was rejected “on the pretty straightforward argument that it gave the false impression that it was part of the White House.”

But in a follow-up application, he argued that because the gift shop was founded by President Harry Truman, that it was indeed tied to the White House. And thus, the Trademark Office issued the trademark, which is why you’ll see a lot of very tiny trademark symbols proudly displayed on the company’s website.

And there you have it: We haven't even gotten into how many grammatical oddities can be found on the site, the odd fonts, or the fact that much of this "official" merchandise is designed by Giannini himself. A customer service representative told Vox that the company is privately owned but makes donations "to police, fire, and military first responders." The website notes that the proceeds support "funding special advanced firearms training and by purchasing safe and effective arms for departments often in smaller jurisdictions with limited advanced training budgets."

Regardless of where these coins came from, the fact of the matter is that the White House is increasingly certain that Kavanaugh will be confirmed now that several Republican senators crucial to the final vote have expressed satisfaction with the findings of a time-limited FBI investigation.

According to Senator Susan Collins (ME), "it appears to be a very thorough investigation, but I’m going back later to personally read the interviews.”

Senator Jeff Flake (AZ), who requested the investigation and delayed the vote following both Kavanaugh and Dr. Ford's testimonies before the Senate Judiciary Committee, told reporters that “we’ve seen no additional corroborating information.”

By contrast, Senator Lisa Murkowski (AK), per one report, said "that she did not yet know whether the FBI had been thorough enough in its investigation or spoken to enough witnesses."

Neither Ford nor Kavanaugh were interviewed by the FBI. Senators said the report totaled only 46 pages. Lawyers for Kavanaugh's accusers have criticized the investigation, saying that the bureau declined to interview the witnesses they suggested.