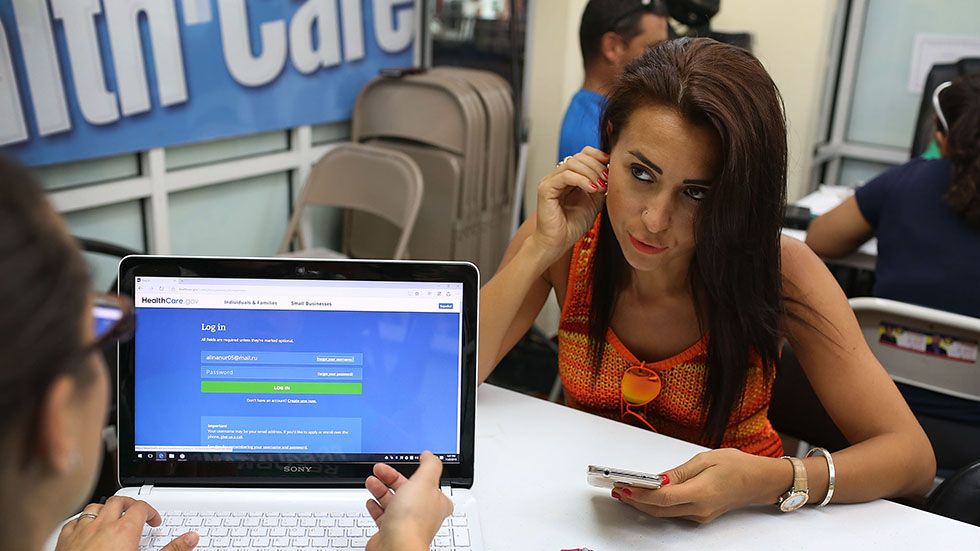 MIAMI, FL - NOVEMBER 02: Alina Nurieva (R) sits with Gabriela Cisneros, an insurance agent from Sunshine Life and Health Advisors, as she picks an insurance plan available in the third year of the Affordable Care Act at a store setup in the Mall of the Americas on November 2, 2015 in Miami, Florida. Open Enrollment began yesterday for people to sign up for a 2016 insurance plan through the Affordable Care Act. (Photo by Joe Raedle/Getty Images)

With the announcement Thursday by CareSource, a nonprofit health insurer, all counties in the United States will have access to Obamacare coverage in 2018. Paulding County in Ohio was the last to receive the green light for continued coverage. State insurance regulators in Ohio as well as in other states including Nevada, Indiana, and Missouri have been working to fill gaps left by the decision of insurers like Anthem to pull back their support for the law signed in 2010.

This is just the latest round in the fight over continuation of the Patient Protection and Affordable Care Act since it was first drafted by the 111th Congress. Thursday's announcement is an important victory for advocates of accessible affordable healthcare for all Americans and another in a series of blows to its opposition.

Per the Kaiser Family Foundation up to 92,000 people in more than 80 counties were at risk of having no insurers for 2018. Their Associate Director, Cynthia Cox, also voiced her pleasure over continued coverage for thousands via Twitter.

The #ACA exchange markets have proven to be much more resilient than many would have thought, even with all of the political uncertainty
— Cynthia Cox (@Cynthia Cox) 1503591440.0

Immediately nicknamed Obamacare, the law has been under constant attack from the GOP. Described in turn by the Trump administration and GOP leadership as imploding, exploding, unraveling, and collapsing, yesterday's announcement belies those claims. After efforts to repeal the Affordable Care Act failed, they had pointed to the potential coverage gaps as evidence the law was falling apart and vowed to "let Obamacare fail". A spokesman for the Department of Health and Human Services, Matt Lloyd, said the ACA has still “failed to deliver.”

It is true that for many rural areas there is a lack of options. A Robert Wood Johnson Foundation analysis found that in 46% of counties only one insurer is available. And there may be fewer choices next year as a Kaiser Foundation study shows more insurers are planning to drop out next year. But for 2018 open enrollment, every American will now at least have a chance at affordable healthcare.