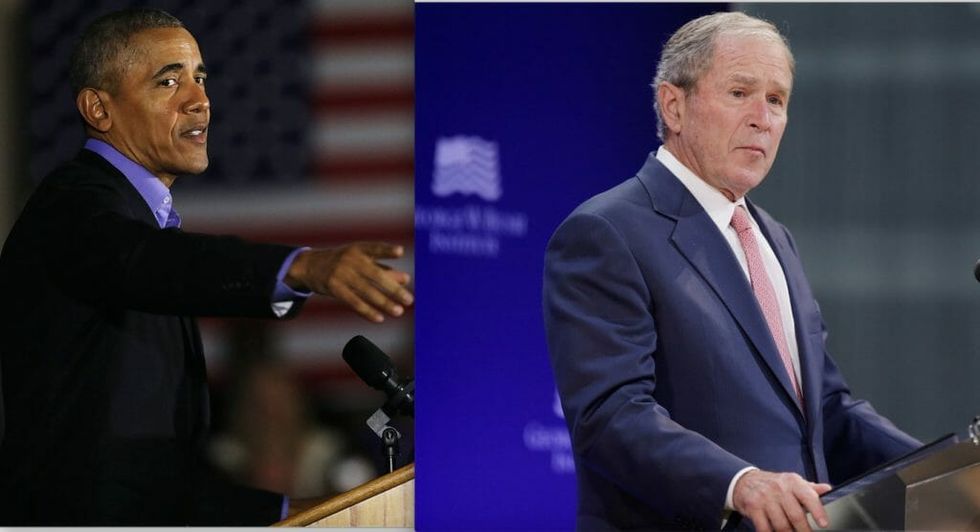 Former Presidents Barack Obama and George W. Bush have largely stayed out of the political spotlight, but yesterday, both men delivered scathing––albeit veiled––assessments of President Donald Trump's brand of politics. Both men suggested the current president's tenure has been defined predominantly by the promotion of bigotry and falsehoods.

"You’ll notice I haven’t been commenting on politics a lot lately, but here’s one thing I know: If you have to win a campaign by dividing people, you’re not going to be able to govern. You won’t be able to unite them later if that’s how you start,” Obama told an audience of 7,500 people in Richmond, Virginia. “We’ve got folks who are deliberately trying to make folks angry, to demonize people who have different ideas, to get the base all riled up because it provides a short-term tactical advantage.”

We’ve seen nationalism distorted into nativism – forgetting the dynamism that immigration has always brought to America,” the 43rd president added. “We see a fading confidence in the value of free markets and international trade – forgetting that conflict, instability, and poverty follow in the wake of protectionism. We have seen the return of isolationist sentiments – forgetting that American security is directly threatened by the chaos and despair of distant places, where threats such as terrorism, infectious disease, criminal gangs and drug trafficking tend to emerge. In all these ways, we need to recall and recover our own identity.

For more highlights from both speeches, please continue to page 2...

ON THE CURRENT STATE OF U.S. POLITICS

BUSH: “We have seen our discourse degraded by casual cruelty. At times, it can seem like the forces pulling us apart are stronger than the forces binding us together. Argument turns too easily into animosity. Disagreement escalates into dehumanization.”

ON THE VIOLENCE WHICH ERUPTED IN CHARLOTTESVILLE, VIRGINIA, OVER THE SUMMER

BUSH: “Bigotry or white supremacy in any form is blasphemy against the American creed.”

ON HOW THE U.S. CAN IMPROVE

OBAMA: “We claim all of our history: the good and the bad. We can acknowledge the fact that Thomas Jefferson … owned and sold slaves, while also acknowledging that he wrote the words, ‘We hold these truths to be self-evident, that all men are created equal…’ We can recognize that, even if our past is not perfect, we can still honor the constitutional ideals that have allowed us to come this far and to keep moving toward a more perfect union.”

BUSH: “Our identity as a nation – unlike many other nations – is not determined by geography or ethnicity, by soil or blood. Being an American involves the embrace of high ideals and civic responsibility. We become the heirs of Thomas Jefferson by accepting the ideal of human dignity found in the Declaration of Independence.”

ON MAINTAINING FAITH IN DEMOCRACY

OBAMA: “That’s what our founders, for all their flaws, understood. Our fate is in our own hands. That was the radical idea of America. That we decide our direction. Not some king. Not some despot. But us: the citizens. Our progress does not always go in a straight line. Sometimes we take two steps forward, and we might take a step back. (The founders) understood that too. But the idea of America is not about going backwards. It’s about pushing forward.”

BUSH: “It is the great advantage of free societies that we creatively adapt to challenges, without the direction of some central authority. … We are a nation with a history of resilience and a genius for renewal. The American spirit does not say, ‘We shall manage,’ or ‘We shall make the best of it.’ It says, ‘We shall overcome.’ And that is exactly what we will do, with the help of God and one another.”

Obama has returned to the campaign trail to stump for Democratic gubernatorial candidates in New Jersey and Virginia ahead of next month's elections. He has more public appearances ahead of him and will remain a prominent figure as preparations for the 2018 midterm elections begin.

Bush, for his part, has largely remained out of the political spotlight since leaving office amid low popularity in 2009. He released a "call to action" report which makes recommendations for maintaining democratic values and protecting American institutions.