Donald Trump Is Rage Tweeting About the Raid on His Personal Lawyer, and Stormy Daniels's Lawyer Just Responded 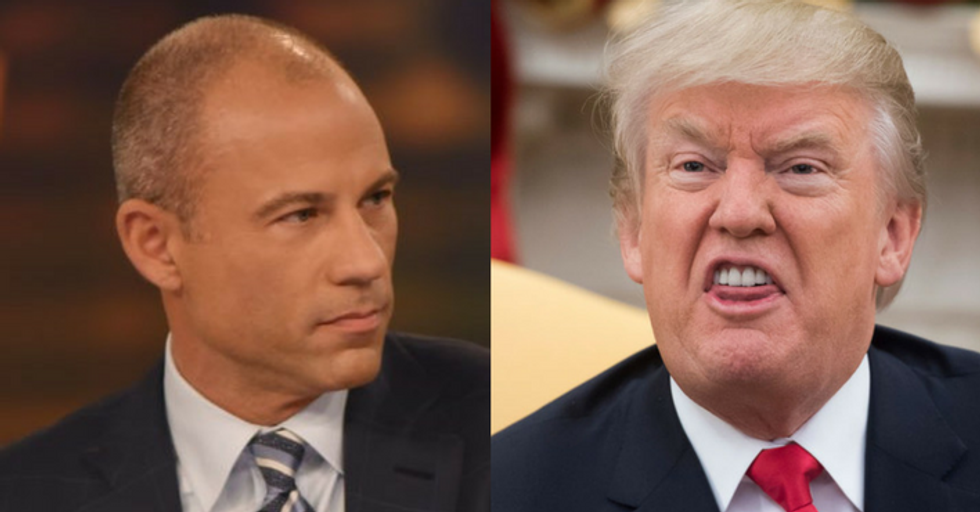 (The View and Saul Loeb/AFP/Getty Images)

The president went to Twitter to vent at the law enforcement action, taken with a duly signed warrant from a federal judge. Federal prosecutors obtained the search warrant based on information indicating the possibility of bank fraud by Mr. Cohen.

Trump is also reported to have expressed outrage in a meeting with senior military commanders Monday night, calling it a “disgraceful situation” and an “attack on our country in a true sense,” accusing the Justice Department of a “witch hunt” and claiming the FBI “broke in to” Cohen’s office.

Many were quick to correct Trump's understanding of legal procedures and due process under United States criminal statutes, including Michael Avenatti, the lawyer currently involved in his own legal tangle with both Cohen and Trump. Avenatti represents Stephanie Clifford in her suit against the two men.

A well-regarded Republican appointed US Atty obtaining valid search warrants, approved by a judge, that are then th… https://t.co/xBv22Vm2zd
— Michael Avenatti (@Michael Avenatti) 1523361146.0

To those that scoffed when we filed this case and claimed it was all about $: As we predicted and as the FBI raid s… https://t.co/FCtj8Zeq3i
— Michael Avenatti (@Michael Avenatti) 1523356275.0

Avenatti was by no means the only person to weigh in with legal advice for the president.

Trump's Tweets garnered a slew of comments from individuals willing to offer advice or references to statutes and regulations or to correct his characterization of the law enforcement action as a "witch hunt."

Among them, Mrs. Betty Bowers, an internet personality billed as "America's Best Christian."

@realDonaldTrump You are right: The attorney-client privilege dies when you and your attorney are committing crimes… https://t.co/TauaiqqpEQ
— Mrs. Betty Bowers (@Mrs. Betty Bowers) 1523366573.0

Mrs. Bowers, a character of comedian Deven Green, was joined by many others responding to Trump's Tweet about the nullification of attorney client privilege.

@realDonaldTrump Yes.Thank u for pointing this out. According to legal experts,once prosecutors have evidence of a… https://t.co/EgzRhXMGwj
— Mika Brzezinski (@Mika Brzezinski) 1523360139.0