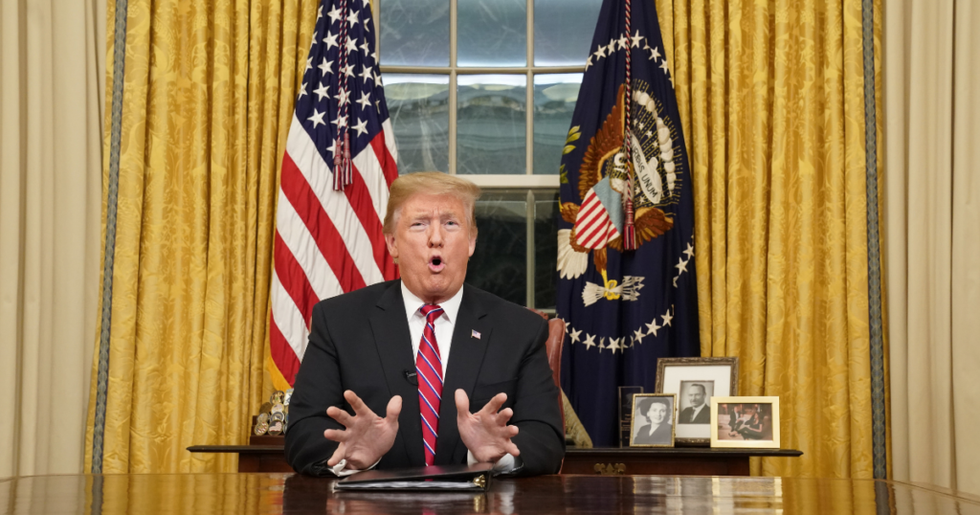 WASHINGTON, DC - JANUARY 08: U.S. President Donald Trump speaks to the nation in his first-prime address from the Oval Office of the White House on January 8, 2019 in Washington, DC. A partial shutdown of the federal government has gone on for 17 days following the president's demand for $5.7 billion for a border wall while Democrats have refused. (Photo by Carlos Barria-Pool/Getty Images)

"AP FACT CHECK: Democrats put the blame for the shutdown on Trump. But it takes two to tango," AP tweeted. "Trump's demand for $5.7 billion for his border wall is one reason for the budget impasse. The Democrats refusal to approve the money is another."

@AP_Politics FACT CHECK: kids at Marjory Stoneman Douglas High School put the blame for the shooting on easy access… https://t.co/RZgUpcCi7M
— On The Case Man (@On The Case Man) 1547043865.0

@KevinMKruse @AP_Politics AP FACT CHECK: The police put the blame for the killing on the murderer. But it takes two… https://t.co/BhCEy4HFKg
— Patrick Dugan (@Patrick Dugan) 1547038299.0

In its post-speech analysis, AP expanded on what has really happened over the last few weeks.

Trump has blamed Democrats for blocking funding for a border wall as the cause of the shutdown, but it was Trump himself who said he would be "proud to shut down the government over border security" last month.

“Democrats will not fund border security," Trump charged during his address.

Again, it was Trump who refused to sign off on a bipartisan continuing resolution that included billions of dollars for border security, all so he could save face with his political base.

"That’s not true. They just won’t fund it the way he wants," AP responded, clarifying its questionable tweet. "They have refused his demand for $5.7 billion to build part of a steel wall across the U.S.-Mexico border."

"Democrats passed legislation the day they took control of the House that offered $1.3 billion for border security, including physical barriers and technology along the U.S. southern border."

This is in spite of the fact that undocumented border crossings have substantially decreased in the last decade, and the "crisis" Trump cites at the southern border is of his administration's making.

And so, Tuesday night, when the Associated Press indulged Trump's criticism of Democrats, people's anger began to boil over.

@AP_Politics What is going on with American media? FACT CHECK: McConnell passed a bill that was bipartisan and Trum… https://t.co/HOcJN1KLdI
— Olga Lautman (@Olga Lautman) 1547010369.0

@AP_Politics Trump wants to be an authoritarian. You are supporting that desire w/ this reporting. Dems not givin… https://t.co/otVPLuQPyk
— Mangy Jay (@Mangy Jay) 1547009422.0

This is the third shutdown of Trump's presidency and will be the longest in American history if it does not end before Friday.