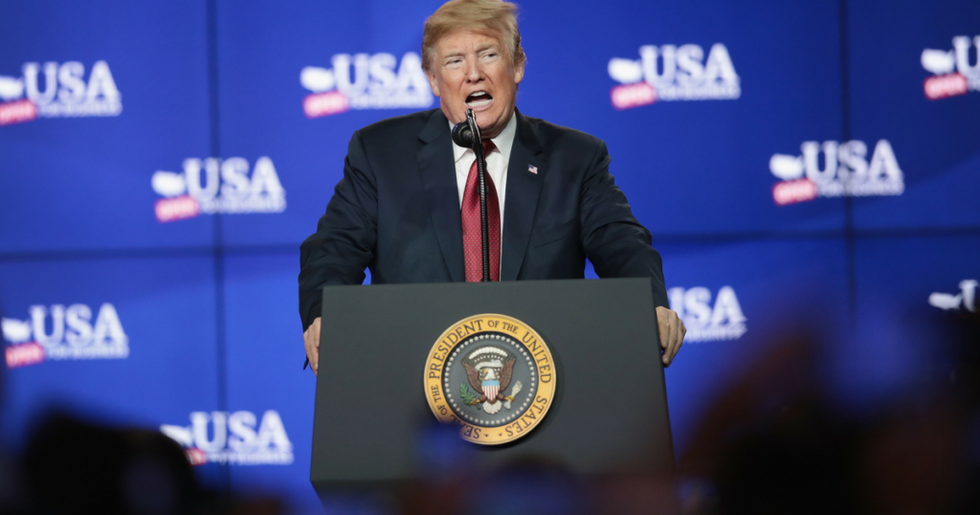 MT PLEASANT, WI - JUNE 28: President Donald Trump speaks to guest during a groundbreaking ceremony for the $10 billion Foxconn factory complex on June 28, 2018 in Mt. Pleasant, Wisconsin. Foxconn, a Taiwanese electronics manufacturer that currently builds Apple iPhones, Amazon Kindles and Echo Dots at their factories in China will manufacture LCD screens at the Wisconsin facility. The facility is expected to create 13,000 jobs. (Photo by Scott Olson/Getty Images)

The staff of the Capital Gazette in Annapolis, Maryland issued a letter on Sunday, thanking readers and the public for their support in the wake of last week's newsroom shooting that left five dead. The letter also took a not-so-subtle jab at President Donald Trump, saying: "We won’t forget being called an enemy of the people."

After thanking their community "for the outpouring of sympathy for the terrible tragedy that took place Thursday in our Annapolis office," the Capital Gazette wrote:

Here’s what else we won’t forget: Death threats and emails from people we don’t know celebrating our loss, or the people who called for one of our reporters to get fired because she got angry and cursed on national television after witnessing her friends getting shot.

"We won’t forget being called an enemy of the people," the paper continued, directly addressing comments Trump has made both as a candidate and as president. "No, we won’t forget that. Because exposing evil, shining light on wrongs and fighting injustice is what we do."

Shortly after taking office last year, Trump issued a hostile tweet directed at American media, which he called "the enemy of the American people." The original tweet, which was deleted and reposted as the one below, contained the word "SICK!" at the end.

Trump regularly chides the press as "fake news" (the exception being Fox, where Trump has an intimate relationship with the likes of Sean Hannity) and often goes after critics who don't paint him in a positive light.

At a rally in South Carolina last week, Trump referred to comedian Stephen Colbert as a "low life."

Following the shooting, Trump's tone toward the press appeared to have softened. In a statement, the president offered condolences to those who were directly affected in the attack.

"This attack shocked the conscience of our nation and filled our hearts with grief," Trump said. "Journalists, like all Americans, should be free from the fear of being violently attacked while doing their job."

“To the families of the victims, there are no words to express our sorrow for your loss. Horrible, horrible event, horrible thing happened,” the president said. “The suffering is so great – I’ve seen some of the people – so great.”

“My government will not rest until we have done everything in our power to reduce violent crime and to protect innocent life,” Trump added. “We will not ever leave your side. So, our warmest, best wishes and regrets. Horrific, horrible thing. Thank you.”

Over the weekend, Salon reported that the shooter had extensive ties to the alt-right, often tweeting about Trump and another far-right politician named Michael Peroutka.

This is what radicalization looks like. Exclusive: Accused Annapolis shooter Jarrod Ramos had dark links to the alt… https://t.co/TyiJBSn2Ep
— Carrie Coon (@Carrie Coon) 1530377268.0

The gunman "was a lone nut who was not politically motivated, but he was politically influenced by the alt-right,” Annapolis writer Jonathan Hutson, who had had previous contact with the shooter in 2015, told Salon.

The shooter swore a “legal oath” that he would kill a Capital Gazette writer. He was convicted of harassing a woman… https://t.co/2XzOwGeCjP
— Shannon Watts (@Shannon Watts) 1530365362.0

The gunman had previously been accused of stalking a reporter and issuing threats toward the Capital Gazette and its staff.

“So what happened this past week?” Hutson asked. “On June 25, Trump – at his South Carolina rally – pointed to members of the media, and called them the enemy of the people. This is a phrase that throughout history has been used by autocrats to incite violence."

"The suspect, [name omittted], had contacted Hutson in March 2015, taunting him about his role in alerting law enforcement and thwarting a potential mass killer who threatened schoolchildren and Jews in far-away Montana," Salon wrote.