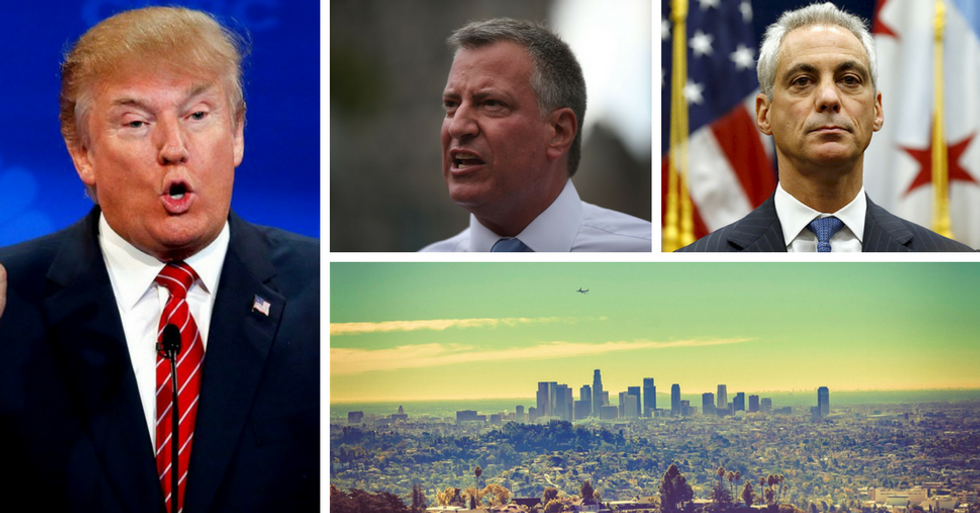 Los Angeles Mayor Eric Garcetti last November rallied 71 U.S. mayors, whose cities are homes to tens of millions of people, to sign an open letter calling on Donald Trump, then the president-elect, to honor the Paris Accord, which aims to reduce greenhouse gases and stem the effects of climate change. Now, as the president prepares to trigger an exit from the agreement, they––a list which includes the mayors of New York, Los Angeles, Chicago, Houston, Philadelphia, and Phoenix––have doubled down on their pledge to "forge ahead even in the absence of federal support."

If the White House withdraws from the Paris climate accord, we’re going to adopt it in Los Angeles. #CAPIdeas
— Eric Garcetti (@Eric Garcetti) 1494941317.0

In a series of tweets, New York City Mayor Bill DeBlasio announced he will sign an “executive order maintaining New York City’s commitment to the Paris Agreement” on climate change after reports yesterday indicated Trump would withdraw from it.

Chicago Mayor Rahm Emanuel condemned what he called an “alarming” decision to "ignore the consensus of 194 countries and the scientific community."

“Chicago will not skirt our responsibility to act,” he said in a statement. "We will work with cities around the country to reduce our emissions in accordance with the Paris Agreement, and urge President Trump to keep our nation’s commitment as well.”

Atlanta Mayor Kasim Reed also criticized the decision, cautioning that withdrawing from the agreement would cause the nation to lose its role as a global leader. He said Atlanta would remain committed to the goals of the climate agreement, including efforts to reduce carbon emissions and find clean energy solutions.

“This decision isolates our country from international partners in shared, global efforts to curb climate change, and at its core is an assault on our future stability and prosperity," he said.

Boston Mayor Martin Walsh urged the Trump administration not to withdraw from the agreement while pledging that the city would maintain its commitment to clean air and water.

“If this administration turns its back to the environment, cities like Boston will have to step up," Walsh said at a City Hall news conference. "As a coastal city, we know what’s at stake. The city of Boston will not back down. We’re going to continue to invest in clean energy and create jobs.”

City leaders are not alone in their efforts. A host of leaders within government, the scientific community, universities, and the private business sector have also expressed concern over the rumored move.

To limit warming and the "impact it causes," says Professor Gabi Hegerl, of the University of Edinburgh in Scotland, "we need to limit the total amount of carbon added to the atmosphere. This can only be done if the world economies work together. If Paris is abandoned or weakened, I fear for the future of our children.”

President Trump’s decision to pull the United States out of the Paris Climate Accord is a stunning abdication of American leadership and a grave threat to our planet’s future. In walking away from this agreement, the President is denying scientific truths, removing safeguards that protect our health and our environment, protecting polluters and their dirty energy agenda, and threatening our national and global security...

The majority of Americans in both parties know that climate change is real, and want clear, decisive action to arrest its dire effects.  Democrats will continue to support the strong action of states, cities and the private sector to halt the march of climate change, no matter how destructive and short-sighted the decisions of this Administration continue to be.

The news also sparked fears in Europe, prompting a response from Parisian Mayor Anne Hidalgo, who chairs a group of 40 major cities and has worked to help city officials bolster their commitments to climate change policies.

“No matter what decision is made by the White House, cities are honouring their responsibilities to implement the Paris agreement. There is no alternative for the future of our planet," she said.

“Donald Trump is not the one who’s going to decide whether he applies the Paris agreement or not. It’s the cities,” Hidalgo said at the time. “Big cities are responsible for 70% of greenhouse-gas emissions. We have a political responsibility, as mayors, to say, ‘We must act now.’ Because tomorrow it will be too late.”

Analysts warn that exiting the agreement could see carbon taxes and other "trade barriers" placed on U.S. exports in the future. President Trump plans to make an announcement today at 3 PM EST.