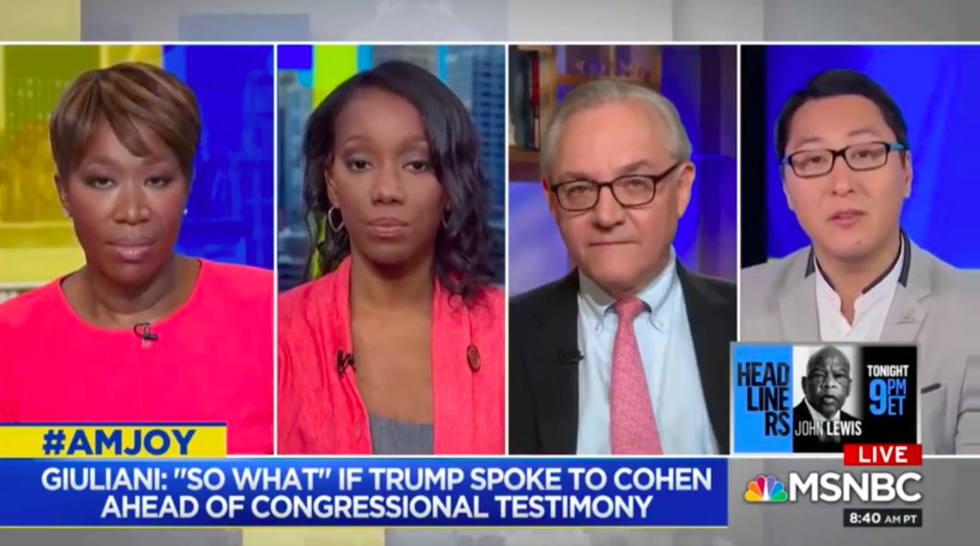 Guests on an MSNBC morning show panel with Joy Reid reacted with disdain for presidential attorney Rudy Giuliani's recent television appearances, noting that Giuliani has continued to contradict himself about the extent of President Donald Trump's ties to Russian operatives and the reality of what he knew about Russian meddling during the 2016 presidential election.

“Every week Rudy Giuliani gets on TV and confesses another crime. I expect him to say in two weeks that Trump is guilty of everything," said Tara Dowell, who once appeared on The Apprentice with Trump.

“I do billion-dollar deals all the time, so some of them just kind of slip my mind, I guess," said Washington Post columnist E.J. Dionne. “If there’s ever a trial on all of this, I think a whole day of the trial will just be jurors watching old Rudy Giuliani tapes and clips because the number of times, he is essentially confirming Trump lied through his teeth about doing business with Russia in that period—it’s just astounding."

“I don’t think he [Giuliani] understands anything that he’s saying half the time at this point. It’s almost like, does Rudy even talk to Donald Trump at all? This has got to be the worst lawyer in the history of mankind. He should be disbarred for being such a terrible lawyer. Every time he goes on television he contradicts himself...in the same conversation..it is maddening..but it is also part of what they do, throw out so many different things that it is impossible to focus on any one point.”

Many have criticized Giuliani in recent days, in large part due to the way he responded to an explosive Buzzfeed News report alleging Trump directed his former personal attorney and fixer Michael Cohen to lie to Congress about a construction deal for a Trump Tower in Moscow.

Giuliani recalled a conversation he had with Trump in which Trump said the Trump Tower Moscow talks were “going on from the day I announced to the day I won.”

He was immediately criticized.

Amazing: @RudyGiuliani recounts to @nytimes a conversation between himself and @realDonaldTrump in which Trump said… https://t.co/slLiMJYpUx
— Renato Mariotti (@Renato Mariotti) 1548029430.0

Rudy Giuliani has extended the timeline for Trump's discussions on a Trump Tower Moscow project to the election. Is… https://t.co/WDRqDJ7Rf4
— Kyle Griffin (@Kyle Griffin) 1548096331.0

should one of us remind Rudy Giuliani that he's working *for* Trump, or should we just sit back and pass the popcorn. I'm thinking popcorn
— Jeff Tiedrich (@Jeff Tiedrich) 1548012598.0

Despite these contradictions, Giuliani has continued to try and impugn Buzzfeed News's credibility.

He has also insisted his "statements on collusion haven't changed."

He has also attacked Cohen on a regular basis while insisting that those who criticize the president are suffering from "Trump Derangement Syndrome."

The false BuzzFeed story shows that #FAKENEWS is real and so is the Deep State. Both are dangerous to our rights. M… https://t.co/hlP4hMu2pF
— Rudy Giuliani (@Rudy Giuliani) 1547904206.0

Giuliani had a flippant reaction recently when questioned about Cohen's decision to testify before Congress on February 7.

Giuliani further came under fire after he suggested that Trump’s legal team should be given the opportunity to “correct” Special Counsel Robert Mueller’s final report before the American people or Congress see it.