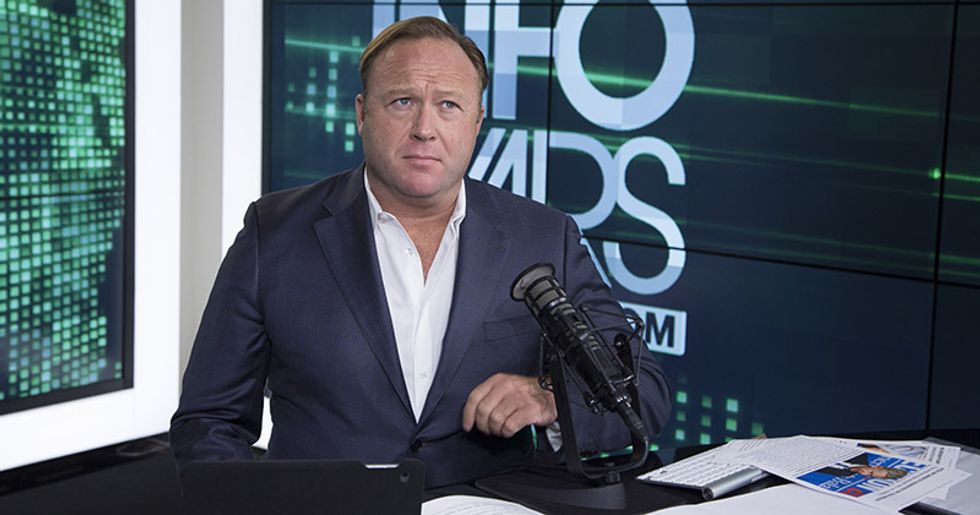 Conspiracy theorist and Infowars host Alex Jones wasted no time before suggesting that Devin Patrick Kelley, the shooter who killed 26 people at the First Baptist Church in Sutherland Springs, Texas, was a member of the leftist "Antifa" movement, a conglomeration of autonomous, self-styled anti-fascist groups nationwide.

“Was this part of the Antifa revolution against Christians and conservatives or a Isis op? [sic],” Jones tweeted Sunday afternoon. "Live from the church."

And Jones was just getting started.

Jones also suggested Kelley had an "anti-Christian" motive, that the left was "celebrating" the attack, and that Kelley was a "violent revolutionary."

Jones has received criticism for promoting unsubstantiated, often bizarre conspiracy theories, including that the 2012 Sandy Hook Elementary Shooting in Newton, Connecticut, which resulted in the deaths of 20 children and several adults, was a hoax. President Donald Trump counts Jones among his inner circle and spoke to Jones personally days after his election win to thank him for his support. Jones has also reinforced the president’s belief that millions of votes were cast illegally, ironically casting doubt upon the legitimacy of the election he supposedly won.

Jones wasn't the only one who implicated the left in the murders, either.

John Cardillo, the host of Off the Cuff on Rebel Media, also suggested Antifa was behind the attack. Every last one of these rabid dogs need to be put down," he wrote.

He also suggested that Democrats were "lecturing" conservatives on gun crime.

The same Democrats who trafficked guns into Mexico, lost track of them, and got a Border Patrol agent killed are lecturing us on gun crime.
— John Cardillo (@John Cardillo) 1509979783.0

Additionally, The Gateway Pundit, a conservative blog which has in the past published unsubstantiated reports and spread conspiracy theories (and to which the president granted White House press credentials), tried to implicate CNN.

Kelley's motive for the shooting are still up in the air, but not a single reputable news organization has suggested Kelley wanted to "start a civil war" or that he was a leftist protester. According to Representative Henry Cuellar (D-TX), who spoke with investigators, it's likely Kelley knew some of the victims.

“I’ve been talking to some community members. They think there was a relative there. It was not random,” Cuellar said. “There’s going to be some sort of nexus between the shooter and this small community.… Somebody in that church will help us find answers.”