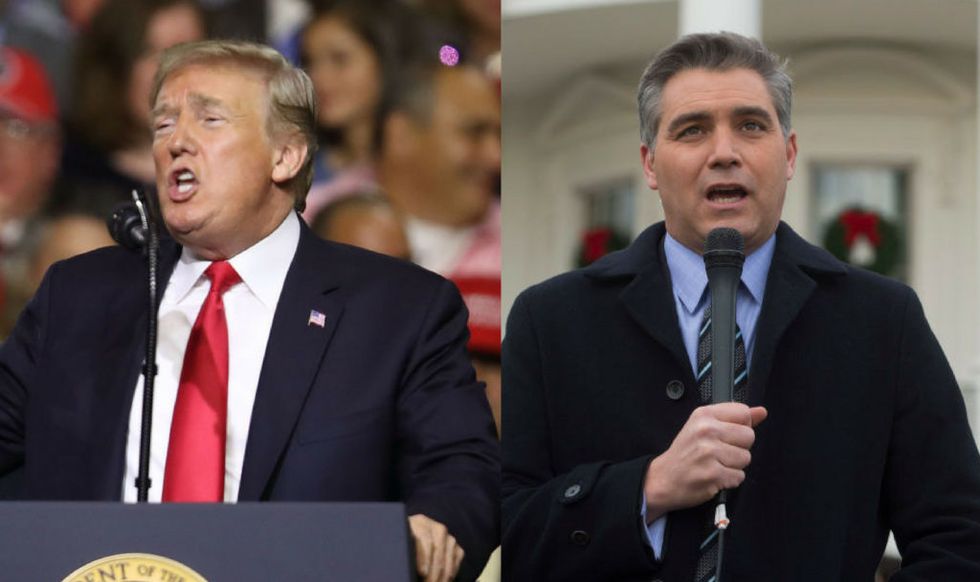 Many Americans may be desensitized to President Donald Trump's frequent ire toward the press by now, but the hatred for so-called "fake news" networks and for reporters that Trump has sown in his supporters since the start of his campaign becomes disturbingly clear at the president's rallies.

This was the case at Trump's rally in Tampa, Florida Tuesday night, where a mass of Trump supporters heckled CNN's Jim Acosta with taunts of "traitor" and "liar" as he stood on a podium to cover the rally for CNN. Eventually, Acosta could hardly hear his own voice.

Acosta's reaction to the ravenous supporters, however, was that of an honorable journalist seeking truth: He engaged them and faced their questions.

This stands in stark contrast to the current administration, who only held three White House Press Briefings last month and whose leader refused sixteen questions in six days. Acosta himself said he took more questions at the rally than the president had taken from the press.

He shared similar sentiments during the rally with CNN News Anchor Anderson Cooper:

And it’s amazing, Anderson. You’re hearing some of the insults being hurled at us right now. I’ve been talking to some of these folks this evening, even though they’re being pretty negative towards us right now. I answered a bunch of questions from some of these Trump supporters here about all sorts of things, a lot more questions than the President has taken from us in recent days, Anderson.

His integrity did not go unnoticed.

@stuartpstevens After each live shot, @Acosta would walk down and politely talk to the people who just heckled him.… https://t.co/DvEr2FFTnd
— Christopher Heath (@Christopher Heath) 1533086057.0

The aggression of the supporters, however, is an example of what can happen when a president focuses his energy on constructing an enemy rather than uniting a country.

Trump has routinely vilified the press as a collective, but his hatred for CNN seems especially fiery, as does his aversion to Acosta.

Last month, during a joint press conference with Prime Minister Theresa May on his visit to the United Kingdom, Trump refused a question from Acosta. Trump's reasoning?

He's also personally taunted Acosta on Twitter in the past:

According to the Upshot, Trump has insulted CNN over 150 times--and that's just on Twitter. One of those times included tweeting a video of himself during Wrestlemania, with Vince McMahon's head replaced by that of the CNN logo.

With a seal of presidential approval, it's easy to see why Trump's base is so quick to mobilize against journalists with physical and verbal intimidation. Unlike Trump, however, Acosta didn't hesitate to take questions--even from those who don't trust him.