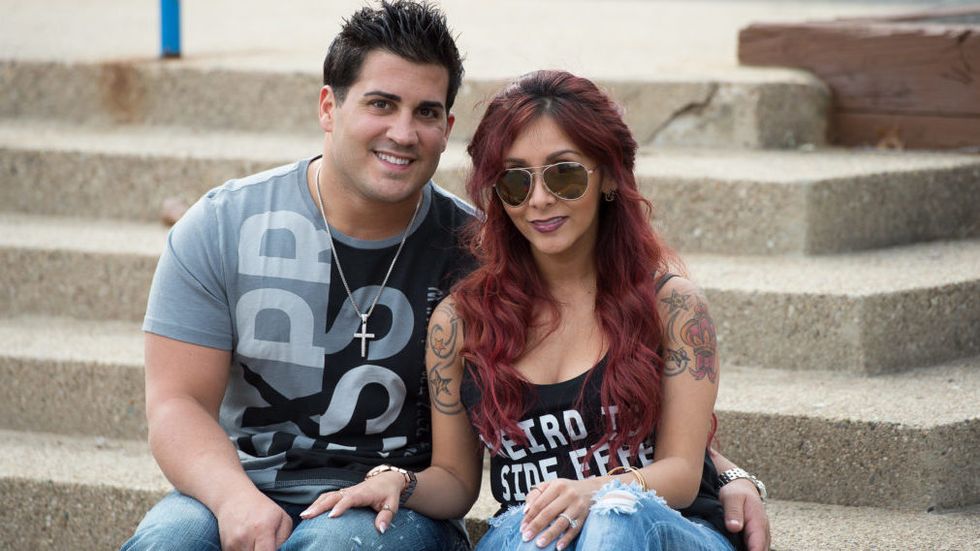 Nicole "Snooki" Polizzi and her fiance Jionni LaValle on April 3, 2014 in New Jersey, are expecting their second child.

Tonight, the Jersey Shore cast is back for an all-new show, Jersey Shore Family Vacation. The series, which premieres Thursday at 8pm ET/PT on MTV, will include most of the show's original cast.

Snooki, one of the most popular cast members from Jersey Shore, has been excited to return to the JS fam. But what about her husband, Jionni LaValle? Will he be part of the show? How did the two meet, in the first place? Here's what you should know:

He Was Nervous About Snooki Returning to the Show

According to News Week, LaValle was worried how the couple's two young children (Lorenzo, 5, and Giovanna, 3) would handle their mother being away to film. In an interview with Newsweek, Snooki said, "He was definitely a little nervous because I wasn’t going to be there to help him with the kids. But he did amazing. I just think he was scared... He was like, ‘I’m gonna miss you… what am I going to do when the kids are crying for you at night?’"

Apart from that, Snooki told the outlet, her husband was excited for her. "He knew this was once in a lifetime, so he said, ‘Go have fun. I’ll be fine.’”

Jionni Does Not Appear on 'Jersey Shore Family Vacation'

While the rest of the cast is bringing their husbands' and even children to Family Vacation, Jionni won't be part of the show. This knowledge led some fans to suspect that there was something wrong with their marriage.

The two, however, are just fine. In January, Jionni took to Instagram to write, "My wife is filming a scene packing up and leaving for her new show and I AM CHOOSING TO NOT be on TV because I simply DO NOT like it," he wrote. "Nicole and I are doing great and became even stronger together while raising our beautiful kids. HOWEVER you will not see me on her reality show. Being a reality star was never something I wanted to be when I grew up. I own my own business and work hard at it, that's what I do. MY wife is a reality star and works hard at that, that's what she does. We ARE not divorced."

Snooki and Jionni met during season 3 of Jersey Shore in 2010 at a bar called Karma. They started dating just two months later, according to MTV, and the rest is history. They tied the knot in 2014.

He Owns His Own Etsy Shop

According to In Touch Weekly, Jionni runs an Etsy shop called LaValle's Man Cave. "There, he sells merchandise with different sayings about his all-time favorite hobby: golf."

LaValle is clearly very focused on his job and career. In his January 9 Instagram post, he writes, "I own my own business and work hard at it, and that's what I do." Still, he is very supportive of his wife's career, acknowledging that she works hard to maintain her reality stardom.

Be sure to tune in to the premiere of Jersey Shore Family Vacation tonight at 8pm ET/PT on MTV.