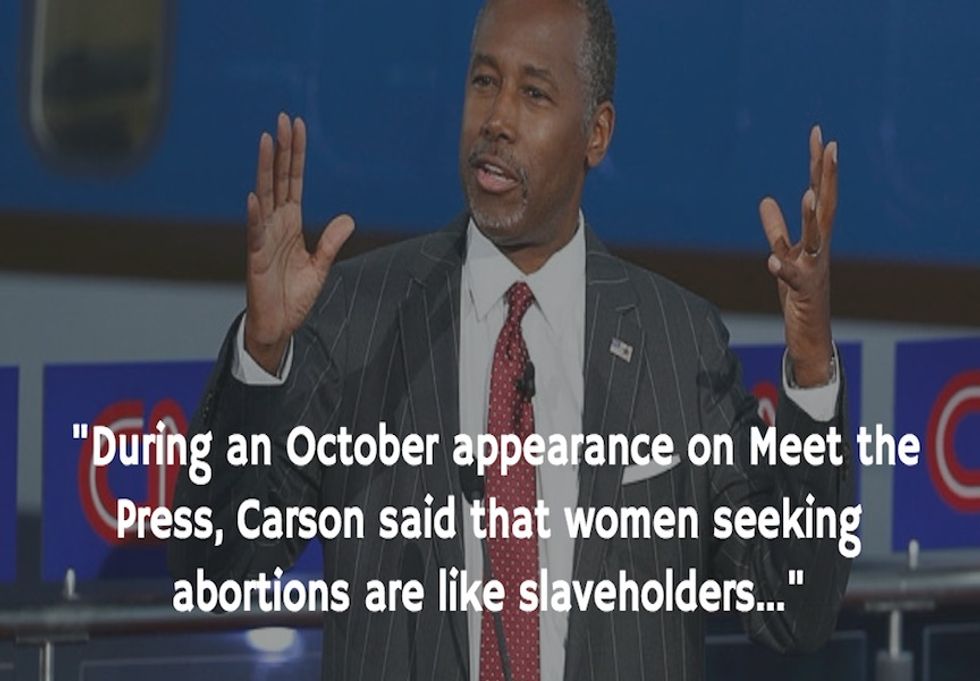 That Ben Carson is a gifted, even brilliant surgeon is undisputed. Before entering the political realm, he enjoyed a long and thoroughly impressive medical career at Johns Hopkins; after separating conjoined twins and making tremendous strides in the treatment of various pediatric neurological conditions, Dr. Carson was awarded the Presidential Medal of Freedom by President George W. Bush. In fact, Carson was in the midst of a seven-hour surgery when he was notified that he would receive the award.

Although Dr. Carson’s career has been an inspirational journey, his trip down the campaign trail has proved bumpier. As with Donald Trump, many of Carson’s supporters like him precisely because he’s a “Washington outsider.” But Candidate Carson is often known more for his inflammatory statements than for his proposed policy initiatives.

Despite his political inexperience, Carson had been on track to overtake Trump as Republican front-runner, but the revelation that he may have been less than truthful about his West Point admission combined with a recent threat to leave the Republican party may prove an insurmountable blow to his Presidential campaign-- a campaign that, for many, has already sullied Carson’s legacy.

It’s easy to see why people are inspired by Ben Carson. While he lacks political expertise, Carson’s story reads like a Hollywood screenplay (Hollywood noticed, by the way; Gifted Hands: The Ben Carson Story, starring Cuba Gooding, Jr., was released in 2009).

Carson and his brother Curtis were raised by their mother in inner-city Detroit. Mrs. Carson, one of 24 children, had only a third-grade education and married her husband, Robert Carson, a Seventh-day Adventist minister, when she was just 13. When their children were 8 and 10 years old, Mrs. Carson left her husband; as it turned out, Robert had been living a double life with another family that he had kept secret.

Young Ben Carson was constantly bullied in school and became deeply frustrated. He developed a violent temper and claims to have actually tried to stab one of his classmates before making the decision to turn his life around (this part of his story is currently in dispute). Carson describes locking himself in his room and praying for God to

control his temper. But whether through steadfast determination or divine guidance, Carson worked his way from the bottom of his class to the top; ultimately, he was accepted to Yale University. After earning his degree in psychology, Carson went on to study medicine at the University of Michigan Medical School and  completed his residency at Johns Hopkins Hospital.

His career as a surgeon was every bit as remarkable as his path to medicine. At age 33, Carson became the youngest ever director of a major division at John Hopkins when he took on his role as director of pediatric neurosurgery. As a surgeon, he developed techniques that controlled the devastating effects of pediatric epilepsy and saved the lives of countless children.

Perhaps Dr. Carson’s most famous achievement was successfully separating conjoined twins in 1987. Patrick and Benjamin Binder were born attached at the skull and not expected to live past the age of two, but after a surgery that took five months to plan and a grueling 22 hours to perform, Carson gave the twins a new chance at life.

In addition to his distinguished career as a surgeon, Carson is a renowned philanthropist. He and his wife established the Carson Scholars Fund —

in 1994 a program that offers scholarships to students seeking higher education. He also co-founded Angels of the OR, an organization that assists in covering the costs of expensive surgeries.

If all of that weren’t enough, Carson is also an accomplished author. Several of his books have made the New York Times Bestseller list, including One Nation: What We Can All Do to Save America’s Future. The book outsold Hillary Clinton’s Hard Choices, also released last year.

After retiring from Johns Hopkins in 2013, Carson shifted his focus from medicine to politics. He began writing an opinion column for the conservative Washington Times, covering everything from race relations to health care. Carson also became a regular contributor on Fox News—and that’s when his statements began to raise some eyebrows.

Some of his more notable statements include the following:

These statements may have sparked outrage from the left, but, for a while at least, they endeared him to the right. According to CNN, Carson had been leading in Iowa by double digitsin October, and MSNBC reported that the candidate raised more money in the third quarter than any of

the other Republican candidates for President. After the revelation that Carson may have fabricated a key part of his inspirational story-- that he was offered and declined a full scholarship to the prestigious West Point Academy-- Carson’s numbers slipped. A recent Reuters poll shows Trump has reclaimed a commanding lead with 35% of the GOP vote; Carson lags behind in second place with just 12%.  And though Carson has pledged not to run as an independent, his recent promise to leave the GOP if the nominee is chosen in a brokered convention could be seen as a lack of commitment to the Party.

Carson on the issues

Carson’s stance on social issues is staunchly conservative. He is, for instance, unabashedly anti-gay rights. And as broadcast in his recent statement on Meet the Press, Carson’s views on abortion are considered extreme: Carson opposes a woman’s right to abortion in almost all circumstances, including cases of rape or incest. Carson asserts that  women in these circumstances hold the “perverse” belief that “the baby is their enemy.” According to him, these women should, instead, be the people most inclined to protect their children.

Carson also revealed that he’s at times not a fan of the First Amendment-- at least not in university settings. In a policy stance that seems curious from a candidate who opposes “political correctness,” Carson has proposed cutting federal funding from institutions of higher education that have “extreme political biases.” As Conor Friedersdorf of The Atlantic points out, for the federal government to police speech based on viewpoint flies in the face of the First Amendment.

Carson once seemed to stand a bit further to the left than the GOP field on at least one issue: the minimum wage. Until the last Republican debate, Carson had consistently argued that we should raise the minimum wage, indexing it to inflation; at the most recent debate, however, Carson discussed the need to “educate” people

about the perils of increasing the minimum wage, including the possibility of massive job losses. The sudden flip-flop could be a double edged sword for Carson -- while it brings him in step with the party platform, it could also be seen as a desperate attempt at damage control.

Carson also believes that the U.S. should replace its “socialist” progressive taxation system (taxing high income earners at a higher rate than low income earners) with a flat tax of ten percent. This percentage is traditionally what parishioners are asked to tithe, and Carson’s argument for equating taxes with tithes is simple: According to Carson, “God is a pretty fair guy.” But some argue it such a figure is totally unworkable as economic policy.A realistic flat tax would have to be closer to 20%, and that’s only after decreasing current levels of government spending.

Running, despite the risk

Today’s Carson presents an enigma. He embodies the “pull yourself up by your own bootstraps” ideal; he is a genuinely impressive man whose list of accomplishments is vast; he has been a scholar and a leader in his field, and few question the accolades he earned over his 39-year career in medicine.

As a Presidential candidate, however, Carson risks forever tarnishing those accomplishments.

The longer the campaign continues, the longer his list of outright falsehoods becomes; in a ranking of Politifact-checked public statements made by 2016 Presidential candidate's since 2007, 84% of Carson's remarks were determined to be "mostly false" or worse. Though his supporters may shrug when he compares gays to pedophiles, or pregnant rape survivors to slaveholders, those statements are unlikely to play well in the general election. And as world events like the recent terror attacks in Paris raise the stakes on foreign policy,the need for leaders experienced in diplomacy increases. In the coming months, many voters will seek leadership that can confidently and clearly articulate policies abroad; mistakes like mispronouncing Hamas (he said “hummus”) in front of the Republican Jewish Coalition’s Presidential Forum last week are not likely to inspire voters’ confidence Carson’s grasp of international relations.

Politics isn’t brain surgery, and Carson has yet to show he is as capable at handling the delicacies of diplomatic relations or the complexities of constitutional law as he is at wielding a scalpel. Unfortunately for Carson, it may be too late for him to start.