After It Was Reported That a Small Town in Japan Needed More Ninjas, Hundreds Around the World Applied--Turns Out It Wasn't True 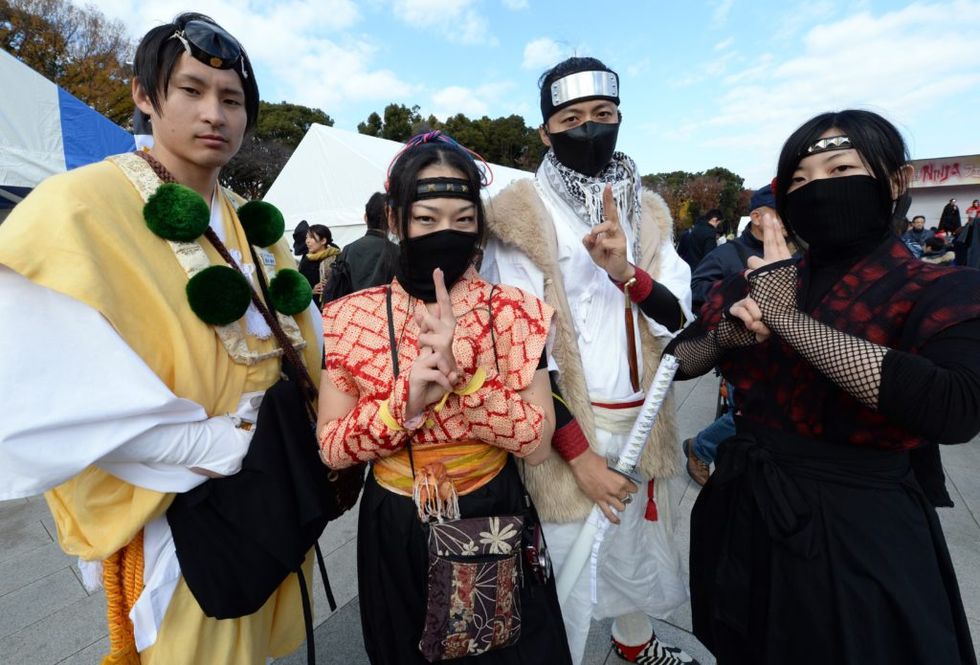 Ninjas from Iga (L and 2nd R) pose with female ninjas from Tokyo's Musashi ninja clan (2nd L and R) during the Iga-Ueno Ninja Festival at the Ueno park in Iga city on December 8, 2013. Iga city in Mie prefecture, about 350-kilometre west of Tokyo, a birthplace of Iga-style ninjas, held the two-day-long festival to attract visitors to the city. AFP PHOTO / TOSHIFUMI KITAMURA (Photo credit should read TOSHIFUMI KITAMURA/AFP/Getty Images)

Like many small cities in Japan, the city of Iga, in Mie Prefecture, is facing a serious depopulation problem. The city of 95,000 is shedding about 1,000 residents annually. Young people from Iga, like young people across the planet, are forsaking rural life in favor of city life.

In order to help combat this trend, Iga Mayor Sakae Okamoto is looking to Iga’s past. And what sets it apart from any number of cities in similar circumstances is that Iga’s history is awesome. Iga claims to be the birthplace of the ninja. It’s already home to one ninja museum, and the city is making moves to underscore its history. But a recent effort to promote its revitalization plan left Okamoto scrambling toset the record straight on some fake news.

When this story was covered by the NPR podcastPlanet Money in mid-July, it attracted a lot of attention, in part because it suggested that Iga’s population had declined so far that it was suffering a ninja shortage.

"This job does have a lot to offer," Planet Money co-host Sally Herships explained. "First of all, the pay is quite competitive. Today, ninjas can earn anything from $23,000 to about $85,000 — which is a really solid salary, and in fact, a lot more than real ninjas used to earn in medieval Japan.”

In Japan, the ninja is more than a nameless, faceless karate master. A ninja (usually called shinobi in Japan) was an expert in Ninjutsu,a complex espionage system that dates back to 1180. Practitioners were skilled in unconventional warfare, traditional spy-craft, and18 other skills, including horsemanship, pyrotechnics, and meteorology; skills taught at Iga’s historical ninja academy.

So it’s no surprise that once Planet Money’s story was released, it was picked up by lots of news websites. Naturally, Iga city hall was flooded with inquiries from prospective ninja students from more than a dozen countries.

But alas, Iga isn’t actually seeking additional ninjas, or even ninja performers. It’s focused on building a second ninja museum and building its tourism industry. With a second museum comes new jobs — both in the design and construction phases, and later in staffing the museum complex with Ninjutsu experts. And that’s a challenge because not only is the city’s population shrinking, but Japanese unemployment figures are very low — just 2.5% nationally.

"Iga didn't put out information about 'a lack of ninjas in Iga' or the 'annual income of ninjas', that is currently reported by some news sites on the Internet,” Okamoto said in a statement. "Please be careful about fake news.”

NPR said that the salary information came from staff at Iga’s existing ninja museum,Ninja Museum of Iga-ryu. It has issued a clarification and updated its story to better reflect Iga’s plans.

Meanwhile, Okamoto has received funding from the national government to move city hall in order to construct the second ninja museum, very close to the existing museum. City planners hope the new complex will better capitalize on Japan’s current tourist boom. After all, attracting more tourists means attracting more money, and more money in the local economy should draw more permanent residents to the city, creating new places and business for tourists (and locals) to enjoy.