Hold On, Did Trump Just Signal a Major Shift on Immigration? 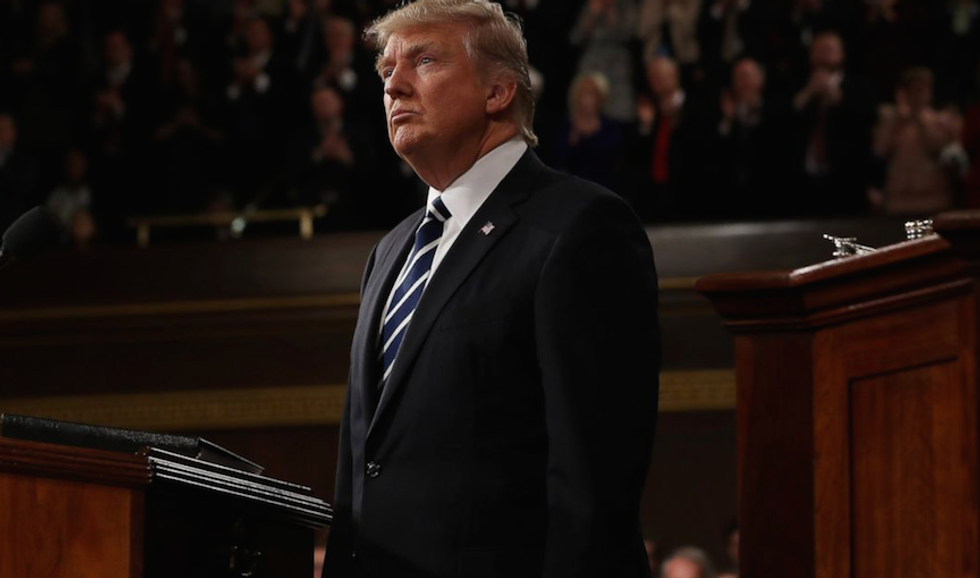 Hours before his first address to a joint session of Congress, President Donald Trump told reporters in a private meeting that “[t[he time is right for an immigration bill as long as there is compromise on both sides.” Trump stressed that there would need to be “a softening on both sides.”

“It has to be a negotiation,” he said, arguing that the bill might make people on both the “far right” and “far left” happy — and it’s a negotiation the President believes he could successfully broker, as the nation is now in a position where it can pass immigration legislation after decades of failed efforts. Trump noted that he believes the country is “exhausted” and that "[T]here's got to be a coming together."

According to a staffer, the compromise Trump envisions would not include a path to citizenship for undocumented workers, but it would allow those who have not committed serious criminal acts to stay and work in the United States.

But when reporters asked Deputy Press Secretary Sarah Huckabee Sanders to confirm the statements made in the earlier meeting, she appeared to backtrack, saying, “The president has been very clear in his process that the immigration system is broken and needs massive reform, and he’s made clear that he’s open to having conversations about that moving forward. Right now his primary focus, as he has made [clear] over and over again, is border control and security at the border.”

Democrats in Congress might open to working with the administration on a compromise, sources said, but there remained healthy amount of skepticism over Trump's actual plans. On Tuesday, Democratic lawmakers indicated that they would require more from the President, including less aggressive immigration enforcement actions, before they believed him.

This more moderate response to the issues involving immigration, such as they were presented, were not reflected in Trump's address to Congress beyond perhaps the statement that by "[s]witching away from this current system of lower-skilled immigration, and instead adopting a merit-based system, we will have so many more benefits. It will save countless dollars, raise workers' wages, and help struggling families, including immigrant families, enter the middle class." According to NPR, however, the study he referenced showed less dramatic results than he touted in his speech.

The bulk of Trump's references to immigration during his speech reflected his campaign rhetoric: "We want all Americans to succeed, but that can’t happen in an environment of lawless chaos. We must restore integrity and the rule of law at our borders. For that reason, we will soon begin the construction of a great, great wall along our southern border. As we speak tonight, we are removing gang members, drug dealers, and criminals that threaten our communities and prey on our very innocent citizens. Bad ones are going out, as I speak, and as I promised throughout the campaign."

Additionally, four of Trump's guests, mentioned in the address, were family members of people killed by immigrants in the country illegally. Critics noted that these symbols only intensify animosity and prejudice towards immigrants and sow further division. In response, many congressional Democrats brought guests who had been negatively impacted by Trump's immigration policies.

The speech we heard moments ago from President Trump was divisive and aims to cause fear in communities across the country. It serves as evidence and reminder that President Trump and Republicans’ vision and plan for the United States, go completely against our values as Democrats, as Americans, and as human beings.

The United States is not a country guided by hatred, fear, and division, as Trump makes it seem. Our country is guided by respect, hard work, sacrifice, opportunity, and hope.

In response to Trump's proposal to create an office for addressing victims of immigration crimes, Senator Minority Leader Chuck Schumer responded, "I think that office is ridiculous. The overwhelmingly majority of immigrants are law-abiding."

Trump's revised travel limitations for immigrants is expected soon. That may be the first indicator of where his immigration policies truly stand. The Associated Press reports that Iraq will be dropped from the list of countries from which immigration and travel is banned.