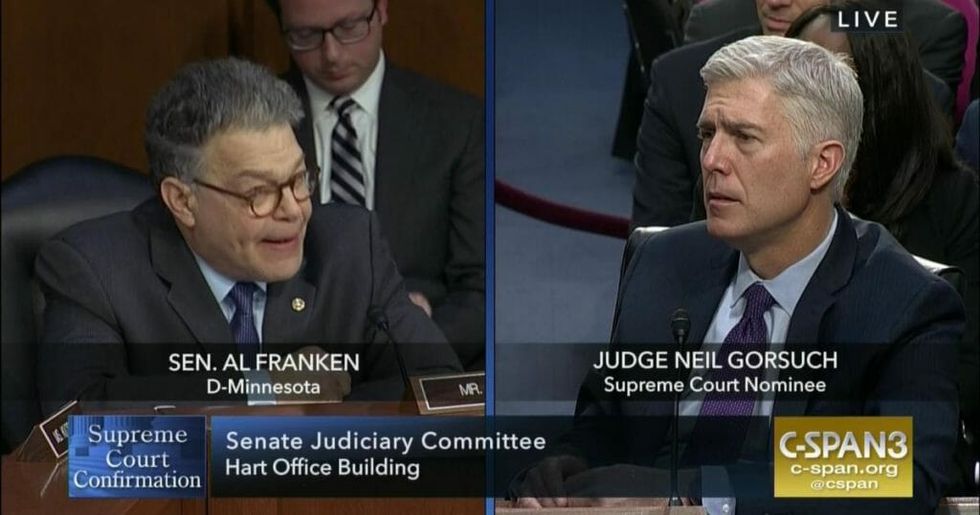 Today we will see if the other Democrats on the Senate Judiciary Committee took notes on Senator Al Franken's methods. Franken, unlike the other committee members, was able to pin down Supreme Court nominee Judge Neil Gorsuch.

During hearings yesterday, Gorsuch, like many Supreme Court nominees, evaded questions about his rulings and past rulings by the Supreme Court. When it was Franken's turn to question the nominee, the former comedian was aggressive in pushing for answers.

In the most memorable portion of yesterday's hearing, Franken opened with questions about Gorsuch's dissent in Transam Trucking v. Department of Labor. The case involved a trucker, Alphonse Maddin, who pulled over after discovering that the brakes on his trailer were not working. He called his company for help, and fell asleep while waiting. It was a January night, the temperatures were below zero, and the heat was also broken in his truck.

When Maddin woke up two hours later, his feet and torso were numb. He called again and was told to stay put and keep waiting. After another half hour of waiting in life-threatening conditions, he unhooked the trailer and drove away to warm up despite another directions from Transam to either drive with the trailer or stay put. He came back when the repair truck arrived 15 minutes later. Maddin was fired for abandoning the truck, and filed a complaint with the Department of Labor and was awarded compensation.

Transam appealed the Department of Labor's decision, and the case wound up in the 10th Circuit Court Court of Appeals, where Gorsuch is a judge. The other two judges on the panel agreed with the DOL decision, but Gorsuch did not, saying "employees who voice safety concerns about their vehicles may decline to cause those vehicles to work without fear of reprisal. And that protection, while significant, just does not give employees license to cause those vehicles to work in ways they happen to wish but an employer forbids." Gorsuch believes that the laws only protected Maddin if he stayed with the truck as directed, despite the weather and his symptoms of hypothermia.

Then Franken asked what Gorsuch would have done if he were in the driver's situation with two serious safety issues. Gorsuch said, "Oh senator, I don’t know what I would have done if I were in his shoes, and I don’t blame him at all for a moment for doing what he did do. I empathize with him entirely."

"You go to the language of the law," Franken said, while reading from the dissent in which Gorsuch says the company was legally able to fire Maddin.  Franken wrapped up the exchange by discussing the absurdity of the ruling:

It is absurd to say this company is in its rights to fire him because he made the choice of possibly dying from freezing to death, or causing other people to die possibly by driving an unsafe vehicle. That's absurd.