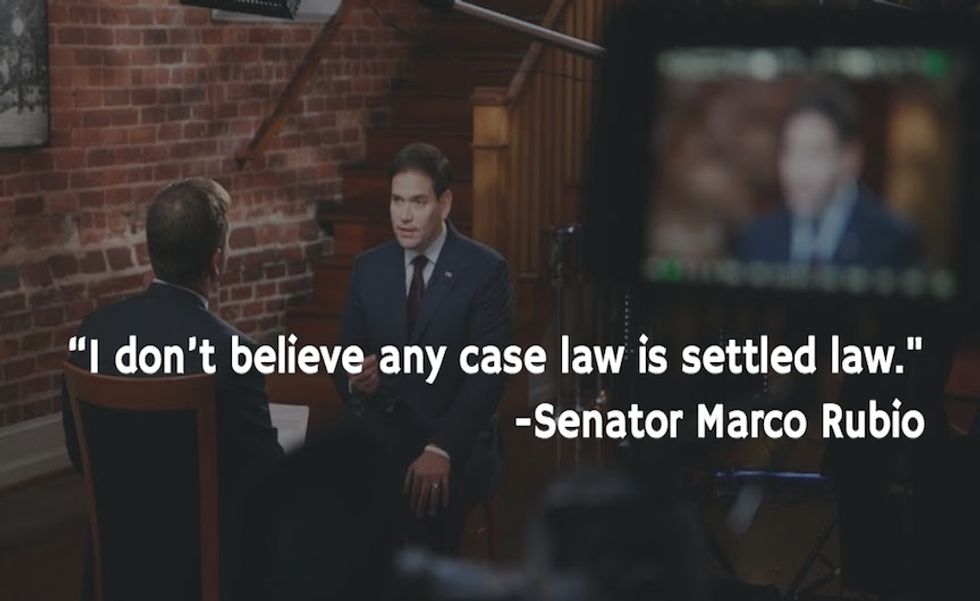 Several candidates in the 2016 Presidential race have staked out their opposition to same-sex marriage following the Obergefell v. Hodges Supreme Court ruling last June. While not all the candidates have spoken out forcefully against the ruling--and both leading Democratic candidates support the decision--many others have emphasized their commitment to overturning it.

Presidential candidate Florida Senator Marco Rubio has a different yet specific plan: He wants to replace Supreme Court justices until the case is overturned. Like many of his fellow candidates, Rubio criticized the Obergefell decision on the ground it was the domain of the states, not the federal courts, to define marriage. In an interview on Meet the Press, Rubio claimed, “States have always defined marriage”--a position PolitiFact labeled “half true” because it ignores both federal marriage legislation, including the Defense of Marriage Act, and previous Supreme Court

decisions, such as Loving v. Virginia, which overturned state bans on interracial marriage. As constitutional law professor Jane Schacter of Stanford University told PolitiFact, “There is no unrestricted prerogative of a state to do whatever it wished with respect to marriage, Constitution be damned.”

Rubio’s comments reveal his view of the judicial process and the executive branch’s role in shaping it. “I don’t believe any case law is settled law. Any future Supreme Court can change it. And ultimately, I will appoint Supreme Court justices that will interpret the Constitution as originally constructed.”

This position appears to challenge the legal doctrine of stare decisis, or “stand by what is decided.” Absent compelling--and successfully argued--reason to the contrary, stare decisis generally requires courts to follow previous decisions.

As University of Pennsylvania constitutional law professor Kermit Roosevelt noted, however, “Few U.S. Supreme Court watchers think that marriage equality is still a live question. The proponents of traditional marriage as an exclusive form have lost.” But it remains to be seen if this will hold, should the next president act through Supreme Court appointments or a proposed Constitutional Amendment to undo Obergefell.