Burned Alive: Can the U.S. Continue to Justify Lethal Injection? 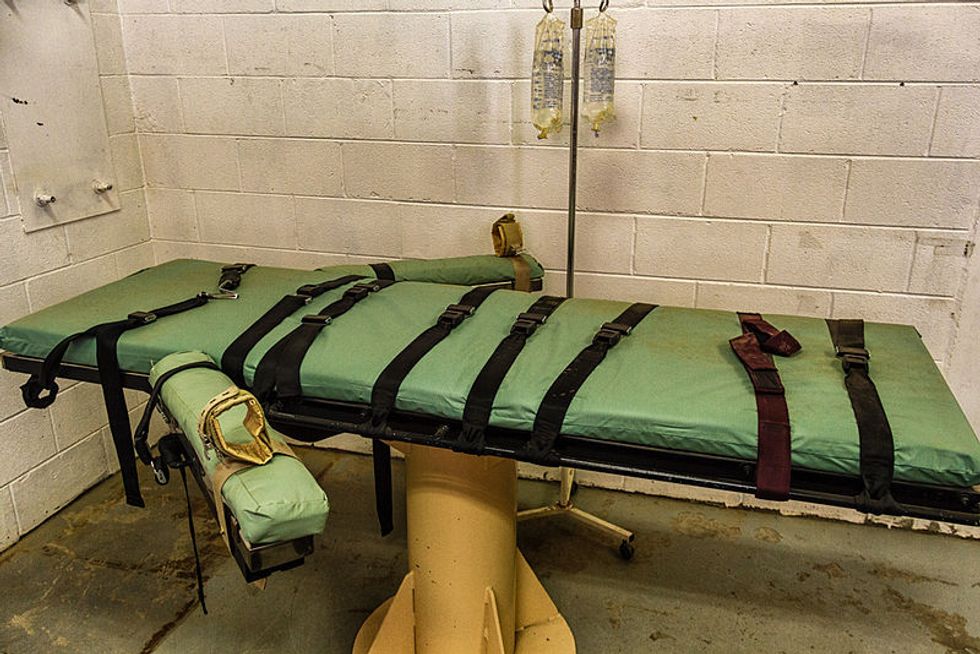 For most Americans, the phrase "death penalty" conjures images of an orange-clad inmate strapped to a metal gurney, his last shallow breaths behind glass in a sterile room. Others with longer memories might see the grim outline of an electric chair or a hooded figure edging toward the hangman's noose.

But Salem Witch Trial-style stake burning? Isn’t that rather 1690s?

Unlikely as it sounds, "burning people alive" is precisely what came up at the Supreme Court last week as the justices grilled lawyers during a particularly grizzly session of oral arguments for Glossip v. Gross, a case that could redefine what constitutes cruel and unusual punishment in the United States.

The procedure is commonly referred to as the "three-drug protocol." It involves administering a sedative to cause unconsciousness (and prevent pain), followed by another drug to cause paralysis (and to prevent the unsightly thrashing and convulsing that so often accompanies execution), finishing with a third drug, usually potassium chloride, to stop the heart. Though that may sound as humane as the act of putting another human being to death could possibly be, a problem arises when the drug being used as a sedative proves an unreliable way to render someone unconscious.

Death row inmates who are executed using an unreliable sedative may suffer ghastly agonizing deaths. Potassium chloride, the third drug used in the three-drug protocol, creates the sensation of, put bluntly, being burned alive. Without a proper sedative, lethal injection transforms from an efficient, humane way to administer death into a modern twist on the medieval.

Midazolam is the drug at the center of this controversy. It is a sedative, but the question is whether it is the right kind of sedative.

If a state’s chosen method of execution creates an imminent risk that a condemned prisoner will feel severe pain, the Court has held such a method would run afoul of the Constitution. If a particular sedative does not reliably put prisoners into a deep state of unconsciousness before the more lethal drugs are administered, there is a strong argument the use of that sedative is unconstitutional. Sixteen professors of pharmacology wrote an amicus brief to the Supreme Court pointing out that "there is overwhelming scientific consensus, including among pharmacologists, that midazolam is incapable of inducing a 'deep, comalike [sic] unconsciousness.'" Essentially, evidence shows that midazolam will put someone to sleep, and it might prevent that person from waking up when a needle is

inserted; however, it might not keep them asleep through more intense pain. In terms of lethal injection, that fact is crucial.

Midazolam also has what's called a "ceiling effect"-- meaning that once you've administered a certain dosage, the effect does not become any more intense. It's roughly analogous to taking more than your recommended dosage of ibuprofen: at a certain point it's not going to help your headache pain dissipate so much as just be toxic to your system.

Fewer choices in the cupboard

The logical question, then, is why use this drug? States have only recently begun to use midazolam; many drugs used in the past are simply no longer available, as pharmaceutical manufacturers are increasingly less willing to supply them for use in executions. Akorn Pharmaceuticals, for example, now requires that its distributors agree to keep its medicines out of correctional institutions.

According to Manny Fernandez of the New York Times, "the decision by manufacturers to cut off supplies of drugs, some of which had been widely used in executions for decades, has left many of the nation’s 32 death penalty states scrambling to come up with new drugs and protocols." That means states must either postpone executions or make do with whatever is in the cupboard, so to speak. And the list of obtainable drugs is growing short.

Support from medical professional associations is rapidly waning as well. Both the American Society of Anesthesiologists and the American Pharmacist Association currently discourage their respective members against providing medications for executions. In March, the International Academy of Compounding Pharmacists adopted a similar policy.

The use of midazolam has already resulted in several horrific botched executions. For instance, The Guardian reports that 38-year old Clayton Lockett, "groaned, writhed, lifted his head and shoulders off the gurney and said 'man!'" before blinds were drawn to block witnesses' view of the execution. After that, things took an even more gruesome turn. Witnesses within the execution room recounted Lockett thrashing and gasping, as well as the presence of a lot of blood after a doctor accidentally struck an

artery while searching for another viable vein. Ultimately, it took Clayton Lockett an excruciating forty-three minutes to die.

Lockett and Wood were not what you would call sympathetic cases; the fact is, death row inmates seldom are. It's not easy to get the general public to care about how painful a death might be when the sentence itself stems from the commission of a heinous act of violence.

But no matter their crimes and no matter how little consideration they might deserve, the Eighth Amendment to the United States Constitution prohibits cruel and unusual punishment--without exception. While the Court has not yet interpreted the Eighth Amendment to prohibit the death penalty altogether, it has held that a "clear risk of severe pain" is enough to postpone an execution until a painless method can be found.

So does a drug cocktail that has the potential to cause a human person to feel as if they are slowly being burned alive meet that standard? The Court will decide in June.

What the future holds…

The battle during oral arguments was sharply split along ideological lines. Conservative justices could not contain their ire at what Justice Alito called "a guerilla war against the death penalty," with Justice Scalia railing against the "abolitionist movement" that he seems to believe has taken control away from the American people to decide how to administer punishment. Liberal justices, on the other hand, showed tremendous concern over whether midazolam by itself is sufficiently effective as a sedative to pass constitutional muster.

As with many things ideological, the deciding vote will likely belong to Justice Anthony Kennedy, who sat virtually silent throughout oral arguments. And which way Kennedy chooses to vote will likely depend upon whether he is persuaded that a ruling against an unreliable three-drug protocol will sound the death knell for lethal injections.

steady decline. According to Amnesty International, 16 countries had abolished the death penalty in 1977. That number rose to 140 by 2013.

In 2012, the U.S. ranked 5th highest in the world for the number of reported executions. Despite the perception that criminal investigations operate like episodes of CSI, or that trials play out like episodes of Law & Order, reality is a lot messier. Human beings make mistakes: we misremember things, we forget faces, we confuse facts. Sometimes, as a result, innocent people go to jail. Sometimes those innocent people are put to death. The LA Times reports that according to a study published by Proceedings of the National Academy of Sciences (PNAS), around four percent of defendants who are found guilty of capital crimes and sentenced to death are, in fact, innocent. As of January 1 of this year there were 3,019 inmates on death row; if the PNAS study is correct, at least 121 of them are innocent.

Even when we use technology to guide us, those methods can also fail. In a very recent and unsettling article, Business Insider's Christina Sterbenz reports that, before the advent of mitochondrial DNA analysis, the best biological tool in criminal investigation was hair microscopy. In this method, analysts essentially would compare hairs found at crime scenes under a microscope and testify about their findings. According to Sterbenz, "[a]nalysts gave testimony in 268 cases and made 'erroneous statements' in 257 of those cases…. Defendants in at least 35 of these cases got the death penalty, and 33 of those cases contained errors. Five of them, however, died of natural causes while on death row, and nine of them have already been executed." It is very possible that some of the individuals who died in prison or who were executed were innocent.

The extinguishing of innocent life is only one of a myriad reasons that public support for the death penalty is waning. Statistics show that capital punishment is not reserved for our country's most serious offenders. Not only is the punishment applied rather arbitrarily, but race has a tremendous impact on whether a death sentence will be imposed. According to Amnesty International, despite the fact that half of all homicide victims are African-American, "the single most reliable predictor of whether someone will be sentenced to death is the race of the victim," and "African-American defendants receive the death penalty at three times the rate of white defendants in cases where the victims are white."

While we as a nation continue to reevaluate whether the death penalty itself remains constitutional, our Constitution at a minimum requires that, when the state chooses to put people to death, it must do so humanely. While no one disputes that requirement, what constitutes "humane" may rest entirely upon the ideological views of the justices--little comfort for those who might languish on death row, some of whom likely were unjustly accused and sentenced to die.