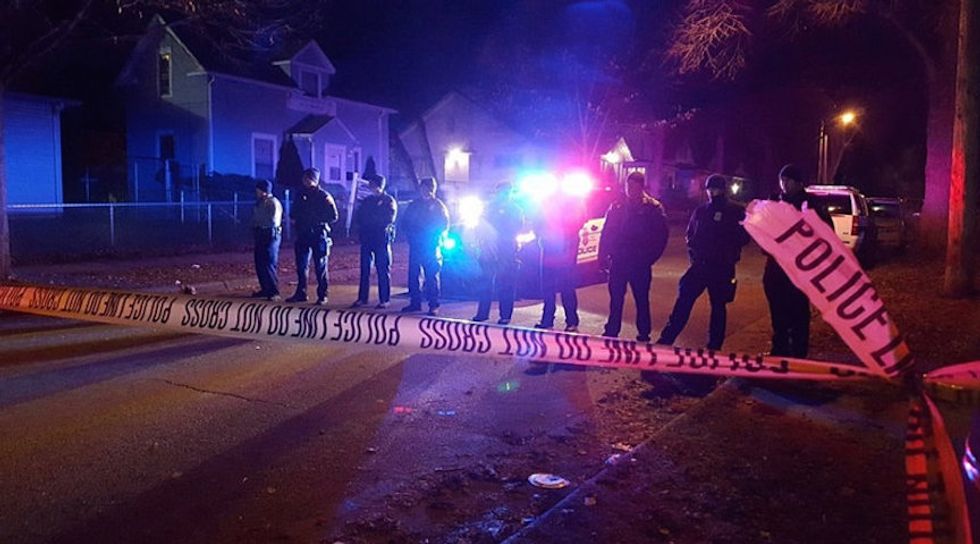 Shots rang out near a Black Lives Matter protest in Minneapolis, on Monday night. Five people have reportedly been injured.

The shooting took place at about 10:45 PM on Monday evening. NBC News reports that as of 3:50 PM on Tuesday, two arrests had been made and police say that they are still pursuing other possible subjects.

Though police had originally reported that they were looking for 3 white male suspects, a 23 year old white male and a 32 year old Hispanic male were taken into custody Tuesday morning. Neither of the suspects’ names has been released.

Miski Noor, a media spokesperson for Black Lives Matter, told The Star Tribune that “a group of white supremacists showed up at the protest, as they have done most nights.” According to The New York Times, witnesses say that three individuals had been taunting the protesters during the rally. A group of about 25 demonstrators began escorting them away from the area when the three started acting suspiciously. About a block from the rally, at least two of the three individuals turned back on the protesters and opened fire. Witness accounts on social media describe the gunmen as two masked white men and one Asian man, all wearing bulletproof vests.

The Star Tribune reports that the victims were protestors at the event; all were black men between the ages of 19 and 43. The five injured protestors were immediately taken to

nearby hospitals, and, according to NPR, police have confirmed that none of the victims’ injuries are life-threatening. One of those injured, however, was shot in the stomach and underwent surgery overnight.

Protesters set up a camp near the Minneapolis Police Department’s 4th Precinct in response to the recent shooting of Jamar Clark. Clark, a 24-year old black man, was shot in the head by police on Sunday, November 15 when police responded to a domestic violence call; he died in the hospital the following day after being taken off of life support.

Police claim that Clark, who had allegedly perpetrated the domestic assault, was interfering with the paramedics who were attending to his victim. Witnesses, however, say that Clark was already in handcuffs when he was shot by police. NBC News reports that the Minnesota's Bureau of Criminal Apprehension and the FBI are investigating Clark’s death.

Tensions have been high in Minneapolis since Clark’s shooting as protests erupted as soon as reports of the incident were issued. Dozens of demonstrators have been arrested since protests began.