Someone Recently Attacked Russian Forces With a Swarm of Homemade Armed Drones and, Well, That's Terrifying

The Kremlin now claims to know who attacked two Syrian locations and that the drones used were, in fact, far more sophisticated than countless photos and news reports would have you believe. 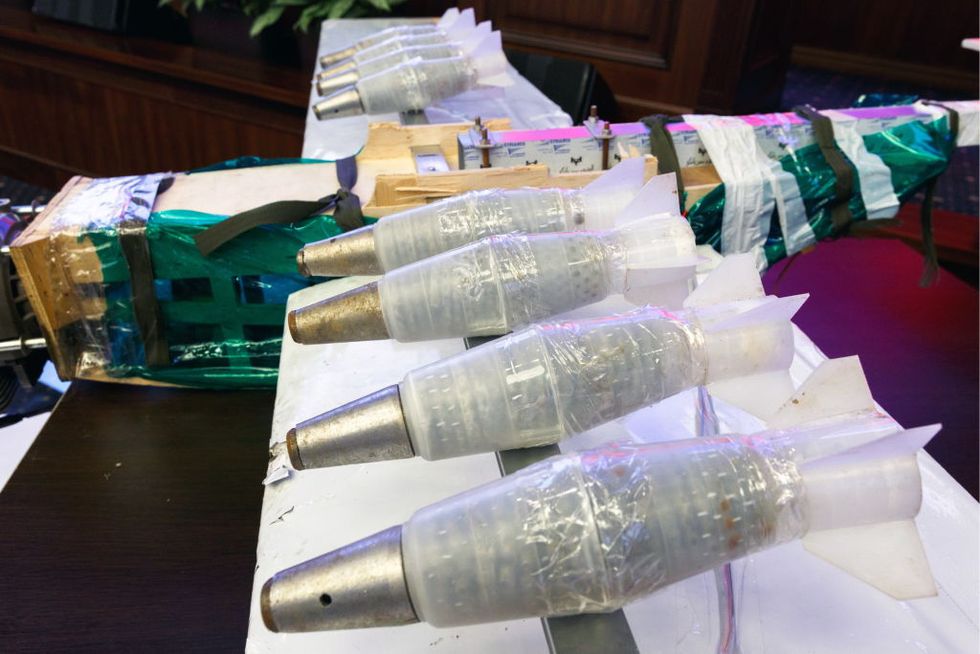 MOSCOW, RUSSIA JANUARY 11, 2018: Showing ammunition loaded onto drones that were used to attack a Russian military base in Syria, during a press briefing. On January 6, 2018, Russian servicemen repelled an attack by 13 armed drones on Russia's Hmeimim air base and Tartus naval base in Syria (Vadim SavitskyTASS via Getty Images)

On December 31, 2017, a warning shot went across the bow for both Russia and the world when 13 armed homemade drones penetrated Russia’s Hmeimim Air Force Base and Tartus naval supply ship in Syria.

To date, the attacks have gone unclaimed, despite Putin’s initial assertion that Turkey played a hand in the attack. The Kremlin now claims to know who attacked both locations and that the drones were, in fact, far more sophisticated than countless photos and news reports would have you believe.

According to CNBC, seven drones were shot down, while the Russian military seized control of six others. Russia insisted for close to a week that, under Turkey’s influence, Muwazarra, a village more than 50 miles from Hmeimim, was responsible. However, residents of the area staunchly reject the accusation. Mohanned Issaf, a 27 year old local summed up the sentiment of the locals: “We reject the Russian accusations completely. . . . The village has always come under shelling, and the regime and Russia don’t need an excuse to bomb us. But now they might bomb more after these false accusations.”

After over a week of public accusations pointed at Turkey, and by extension the village of Muwazarra, the Kremlin publicly stated they no longer felt Turkey perpetrated the attack, and would only call the attackers “terrorists.” With blame being tossed around, and Muwazarra sitting in the middle of potential retaliation, facts have come to light that may change the course of modern warfare.

The drones used in the attack were made of cheaply-assembled plywood, attached to an engine comparable to ones used to power lawn mowers. The rockets carried by the drones could have been dropped from the craft or used as bombs. The parts used to make the drones in the attack can be found in a garage or can easily be purchased at a local hardware store, and the directions for building such drones can be found on quite a few websites.

If a person felt lazy, they could order a craft for as little as $100 to a few thousand dollars to minimize their labor. This makes modern warfare affordable to all.

Because the range of these unmanned instruments can go from 2.5 to over 60 miles, and the drone’s air time is steadily increasing, an individual could disrupt or cripple a city like New York without leaving their home.  Thanks to sites and forums all over the web, designs can be refined without the aid of federal military dollars. Paul Scharre, who previously worked for the Pentagon on unmanned and autonomous systems and emerging weapons technology, made this point painfully clear: "We have seen nonstate actors use armed drones in the past, but this is a significant step up in terms of the scale of attacks and just how many they were able to use simultaneously."

Preemptive measures are now paramount in combating domestic violence and terrorism all over the world. The New York Police and Fire Department’s use of drone technology is still in its infancy as a tool for crime prevention and public safety. According to a study from the Center for the Study of the Drone at Bard College, local law enforcement across the US purchased 347 drones were purchased between 2009 and 2017.

Agencies are exploring the use of drones domestically with some noted success. In 2017, the New York Fire Department used drones to help stop a four-alarm fire, which furthered the conversation of the use of drones for domestic use. However, across the country, local authorities  have primarily focused on the prevention of drones in private or commercial air space, rather than the potential terroristic scenarios the Russian-Syria attack highlighted.

Militaries like the U.S., which dropped over 26,000 bombs using drones during Obama’s tenure as president, will no longer have the advantage of distance to keep soldiers safe in battle. The use of drones in hostile countries has been an important tool for securing the safety of military personnel.

What we have learned from the Russia attack is that due to drone warfare,today's soldiers may find themselves exposed to greater harm than they have in a long time. When you consider that about 2,500 soldiers were killed during the eight years Obama was in office compared to the estimated 2,104 killed in drone strikes in 2016 alone, the potential danger Scharre warns about is easily crystallized.

Technology has always been the chief force by which we measure societal advancement and innovation will always be rendered commonplace over time. Drones are no exception to this rule. What the Russian and world militaries create to thwart the use of drones in the future will indeed further evolve the nature of warfare.