Meet The Alabama Judge Who Refuses To Uphold The Constitution 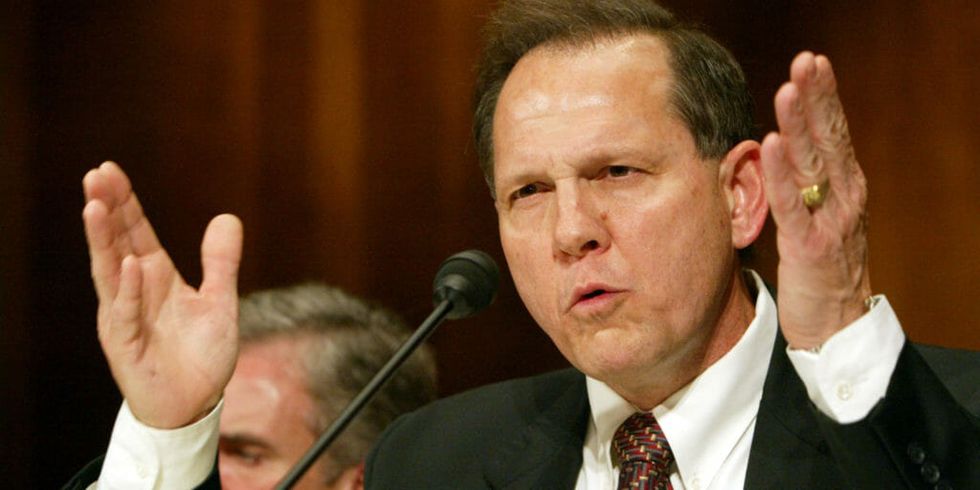 WASHINGTON - JUNE 8: Roy Moore, former Chief Justice of The Alabama Supreme Court, testifies at a Senate Constitution, Civil Rights and Property Rights Subcommittee hearing, entitled "Beyond the Pledge of Allegiance: Hostility to Religious Expression in the Public Square." on Capitol Hill in Washington, DC June 8, 2004. Moore was removed from office for refusing to take down a public display of the Ten Commandments in the courthouse. (Photo by Matthew Cavanaugh/Getty Images)

Alabama Chief Justice Roy Moore vowed to uphold the Constitution of the United States and impartially administer justice. So how did he end up suspended – again – for refusing to do just that?

In January of 2016, Moore ordered Alabama’s probate judges to defy a Federal District Court’s order and refuse applications for marriage licenses from same-sex couples, despite the fact that the United States Supreme Court ruled that same-sex marriage is a constitutional right. The Southern Poverty Law Center filed a complaint noting that the judge, among other things, denigrated and defied federal courts and encouraged lawlessness. The Alabama Judicial Inquiry Commission charged Moore with six counts of ethics violations.

“We intend to fight this agenda vigorously and expect to prevail,” Moore says of the suspension. He believes that, by issuing licenses to same-sex couples, he would be in violation of the Alabama Constitution. “I pledged to support not only the U.S. Constitution but the Alabama Constitution as well,” Moore said when he was sworn into office, “which provided in its preamble that the state ‘established justice’ by ‘invoking the favor and guidance of Almighty God.’”

Moore interpreted that to mean that the word of God took precedence over the law.

Ambrosia Starling, a drag performer in Dothan, is one of the plaintiffs who filed a judicial ethics complaint against Moore for failure to give LGBT people equal protection under the law. Moore shot back at a press conference in April, calling transsexualism a “known

mental illness,” and said that Starling, along with atheists and LGBT activists, had a political agenda against him.

Starling responded to the accusations in an open letter to Moore, which read, in part, “The Judicial Inquiry Commission for the State of Alabama seems to think I am quite mentally stable, as are more than 50 fellow citizens who have filed such complaints. Your attempt to manipulate laws and due process of law against any citizen are a disgrace to your elected office.”

Richard Cohen of the Southern Poverty Law Center has stronger words for Moore. “Moore has disgraced his office for far too long,” he says. “He’s such a religious zealot, such an egomaniac that he thinks he doesn’t have to follow federal court rulings he disagrees with.”

This isn’t the first time Judge Moore has shown a bias against the LGBT community. He opposes legal protections for LGBT individuals and claims that same-sex marriage is an anathema to the traditional family unit.

In the case of D.H. v. H.H. in 2002, Moore denied a lesbian mother primary custody of her children in favor of their abusive father. He claimed that the mother and her lesbian partner had “chosen to expose the child continuously to a lifestyle that is ‘neither legal in this state, nor moral in the eyes of most of its citizens.’

Moore gave a speech at a 2012 Tea Party rally in which he said: "Same sex marriage will be the ultimate destruction of our country because it destroys the very foundation upon which this nation is based.” Moore went on to say, "Today we've got to go back to that

U.S. Constitution. We've got to go back to the acknowledgment of God for very basic, relative reasons. People have forgotten why we need God. But let me tell you, without God, you have no rights.”

Refusal to Separate Church and State

Moore’s unwillingness to separate church and state is well documented and was on display immediately after he took the position of Chief Justice. He had previously been sued for pre-session prayer and the display of a Ten Commandments plaque on the wall of the courtroom; he went on to replace the plaque with a gigantic monument in front of the courthouse.

He was sued again, and a federal judge declared that the monument violated the Establishment Clause of the U.S. Constitution. “If all Chief Justice Moore had done were to emphasize the Ten Commandments’ historical and educational importance… or their importance as a model code for good citizenship… this court would have a much different case before it.”

Moore refused to comply with the ruling. U.S. District Judge Myron Thompson threatened to fine the state $5,000 for each day Moore defied the court order, which Moore referred to as coercion. He claimed that the court order was unlawful and therefore unenforceable.

In a statement, the ethics panel found that Judge Moore not only willfully and publicly defied the orders of a United States district court, but also affirmed that he would

continue to do so.

Moore was officially removed from office in November of 2003. A Texas-based veteran’s group arranged to bring the two and a half ton monument to Washington DC, where it featured prominently in a 2004 “America for Jesus” prayer rally.

More of the Same

And yet, despite the fact that he was ousted for ethics violations, Moore won the post again, defeating Democrat Bob Vance with 52 percent of the vote in 2012. He proved that his loose interpretation of Constitutional law hadn’t changed when he told his state’s probate judges to stop issuing same-sex marriage licenses.

“No official in Alabama has the right to ignore a federal court decision legalizing same-sex marriage,” said Rev. Barry W. Lynn, executive director of Americans United for Separation of Church and State.

Moore was suspended with pay on May 6 while the Alabama Court of the Judiciary considers his charges. He faces removal from office, and this time for good - but only on a technicality: Moore will be too old under Alabama law to run for another term.