Violence Erupts At Another Trump Rally. It's The Worst To Date. 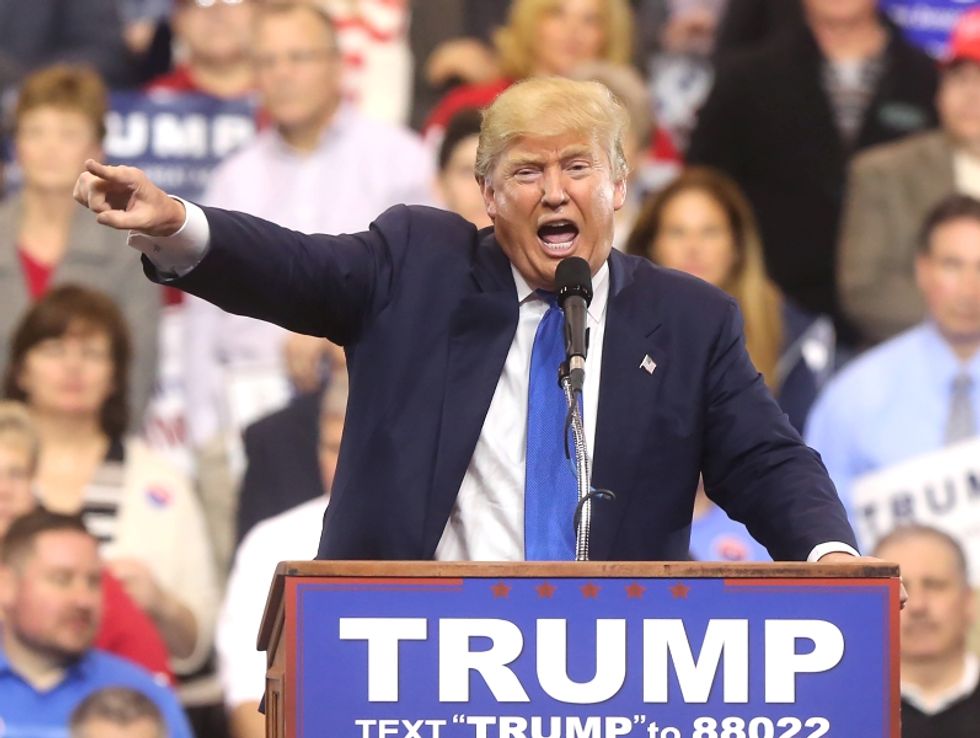 12MARCH16 bishop— Donald Trump at his rally in Cleveland. Trump commented several time using his now popular phrase, “get em out of here”.

At a Trump rally in San Jose, California, supporters and protesters were at each other’s throats, throwing raw eggs and debris. Inside the hall, Trump called for his opponent to be “jailed,” while outside the rally, protesters gathered in the streets, with encounters becoming increasingly violent and unruly. They surrounded vehicles, including police cars, and smashed tail lights. One supporter claimed that a protestor had seized his hat, which featured the Trump campaign slogan “Make America Great Again,” and set fire to it. Local police declared the crowd an “unlawful assembly,” and arrested several protesters. When the crowd continued to taunt the police, who were dressed in full riot gear, authorities formed lines to push them out of downtown San Jose. Tom Llamas of ABC News tweeted that “the police in San Jose have appeared to [have] lost control” and deemed it “the most violent demonstration” to date.

Hardly a Trump event now passes without reports of violence among supporters, protesters and local authorities. Trump’s public appearances on the campaign trail have fostered a dangerous cycle of violence, media saturation, and a new baseline of acceptability. Trump holds a rally and violence erupts, sometimes a scuffle among a few attendees, sometimes a full-blown brawl in the streets. Trump responds with a shrug and a glib remark. The media gives the incident wide play, and, a few days later, it happens all over again.

In late May, for example, at a San Diego rally, police arrested 35 people for throwing rocks and water bottles during Trump’s appearance. San Diego’s population is about thirty percent Latino, and many protesters showed up to oppose Trump’s plans to round up undocumented immigrants and build a wall along the border. Just a few days earlier, in Albuquerque, New Mexico, another area with a large Latino population, Trump addressed a throng of supporters while his security escorted several protesters out of the rally. Outside the event, crowds threw items at police, who again were in full riot gear, before the authorities responded with pepper spray. Shattered glass spurned a panic about possible gunshots, a rumor later disproved. For his part, Trump merely smiled and even mocked a young protester being removed by security, drawing attention to his youth, amid jibes that he was “still wearing diapers.” Protests at his Anaheim, California rally unfolded the following day with large numbers again facing police officers in riot gear, who this time were on horseback and motorcycles.

At a Trump rally in Orange, California, Trump supporters and protesters clashed almost immediately. True to pattern, there were fist fights, smashed windows and a few bloodied faces. Orange, once the Republican epicenter of Southern California, is now diversely populated with young first generation Americans who traditionally do not vote Republican. Many of these protestors specifically took issue with Trump’s comments about undocumented workers. Rojelio Banuelos carried a sign that read, "Liberation not deportation." Other protesters waved Mexico’s flag.

Other rallies have featured a woman assaulted by Trump’s manager, a reporter attacked by a member

of Trump’s security team, a man punched in the face by a Trump fan, and an African American teenager forcibly shoved and harassed by a group of men until she left the event. Trump has demanded his security team toss out protesters without their coats, asked audience members to strike them, and offered to pay the legal fees for anyone arrested for harming a protester.

Trump’s demeanor is far from what TIME magazine once described as “apology culture.” American society generally holds politicians and celebrities accountable for their behavior. If a public figure speaks or acts inappropriately toward a group or individual, the ensuing outcry, especially on social media, often will shame the offender until there is a hasty–even if insincere–apology. Trump, however, seems impervious to social judgment, dodging blame for his supporters’ violent actions, even as they occur at his behest or with his blessing.

In contrast, aside from an incident with Sanders’ supporters in Nevada, where verbal death threats were made at to chairwoman Roberta Lange, the other candidates’ campaign events have been fairly calm. There have been occasional protesters at events held by other candidates, but not on the scale of Trump events, and none has led to any physical violence.

Some pundits argue that Trump’s statements about undocumented migrants in the United States, his assertions about Muslims, and his flippant remarks about anyone who opposes him have emboldened formerly discreet Americans to openly display their racism. But Trump supporters are hardly monolithic. While white males comprise the majority of his base, Trump enjoys pockets of support across many demographics. There are Muslims For Trump,Gays For Trump, Latinos For Trump and Women for Trump. The protesters are equally diverse, also featuring many white voters, despite the disproportionate media attention on protesters of color.

Prior to assuming her new position as head of Hispanic outreach for the Republican National Committee, Helen Aguirre Ferré appeared on television to lament the frequency of physical violence at Trump rallies. She decried Trump as one of the “principal instigators of the violence.”

“Donald Trump has contributed to this [culture of violence that we’re seeing],” she said. “And there is very clear evidence in

his speeches and his rallies that he does instigate that violence. And then he’ll say, ‘I will pay for your attorney,’ or ‘Don’t rough them up too much,’ as if [the anti-Trump protesters] were going to be...roughed up anyway. But just the introduction to that in the political context from a candidate is so dangerous, and so divisive.”

Her predecessor, Ruth Guerra, resigned earlier this weekdue to her reported disgust over Trump’s racist rhetoric.

With Trump now the presumptive Republican nominee, the months ahead leading to the general election on November 9th appear fraught with the risk of increasing violence.  The severity of the protests at his New Mexico and California events notched up the stakes and consequences for both sides. Trump has yet to denounce the violence of his supporters and ask them to stop. On the other side, protesters who were once merely angry when Trump was one candidate of many, are growing more outraged and passionate now that his nomination seems all but assured. Trump himself has warned that his supporters would “riot” if he doesn’t secure the nomination in July.

Some question whether the incidents are being overblown by media and social sharing and argue they are not reflective of reality. But certain facts are beyond dispute: Trump had to cancel a Chicago rally due to protests. Police are now prepared and equipped for massive social unrest. Trump has had to use a “secret” passageway to get to the podium at a Northern California event, simply to avoid a throng of protesters at the usual entrance.

Recently, a viral video showed a young man attending rallies for both Trump and Sanders- holding a sign that read “Free Hugs.” Trump supporters were portrayed as rude, hostile and even threatening bodily harm, while the Sanders rally participants were depicted as warm, kind and generous with hugs. The viral success of that video may be reinforcing stereotypes and widening the divide with no one to question its fairness or veracity.

As each party’s respective convention approaches, and the race takes on a clearer trajectory, many expect further disruptions and even open warfare in the streets. But few anticipate that Trump will ask his supporters anytime soon to show restraint and respect.