Trump Approval Rating Plunges, but News Even Worse for Bannon and Spicer 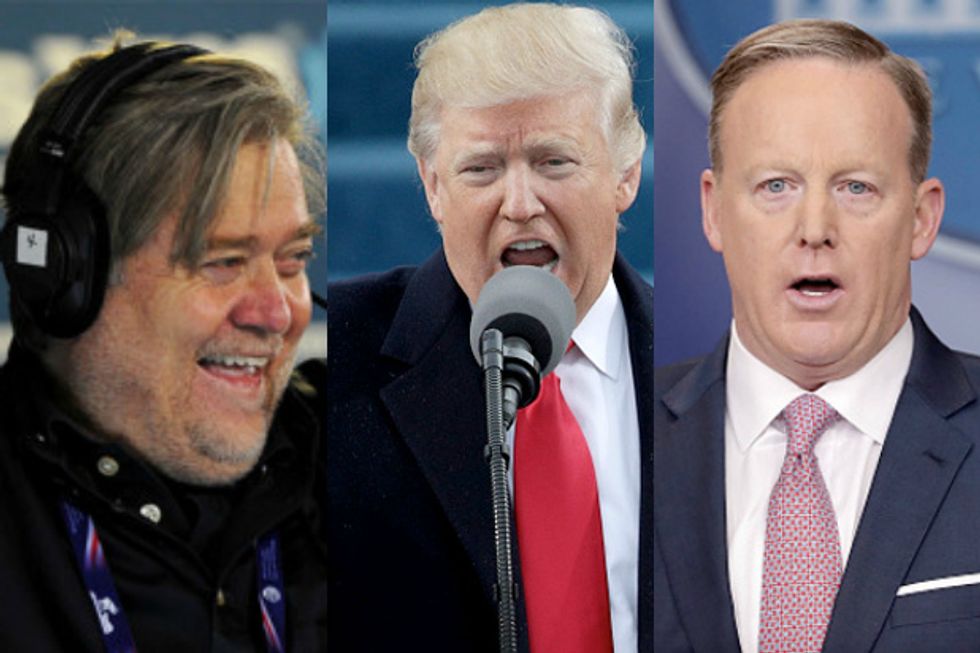 The latest Quinnipiac University national poll shows that President Donald Trump's job approval ratings continue to fall. His most prominent associates in the administration, Stephen Bannon and Sean Spicer, are faring even worse.

"President Donald Trump continues to struggle, even among his most loyal supporters. Many of them would be hard pressed to see even a sliver of a silver lining in this troubling downward spiral. President George W. Bush, who hit a negative 28 - 67 percent on May 14, 2008, had less support, but it took eight years, two unpopular wars and a staggering economy to get there," said Tim Malloy, assistant director of the Quinnipiac University Poll.

Just 35 percent of those surveyed approved of the job the president is doing. The previous Quinnipiac poll had Trump at a 37 percent approval rating. 57 percent of Americans disapprove of Trump's job performance.

Spicer earned an approval rating of 20 percent. Only 11 percent of voters approved of the job Bannon is doing. Among Republicans,

48% approve of Spicer and 23% approve of Bannon. More Democrats say they have heard about Bannon and Spicer than Republicans, adding to their negatives.

Trump's ratings on personal characteristics have dropped as well. More than half of all Americans (52%) said they were embarrassed to have him as president. Americans also disapprove the way Trump handles issues related to the environment, the economy, foreign policy, immigration, and terrorism.

The slipping numbers also include people in the president's key demographics. Among Republicans, Trump's approval rating is 77 percent. But only 39 percent of Independents, 43 percent of white voters, and 39 percent of men approve of the job the president is doing.

The polling was done from March 30 to April 3. 1,171 voters were surveyed nationwide. The margin of error is 2.9 percentage points.