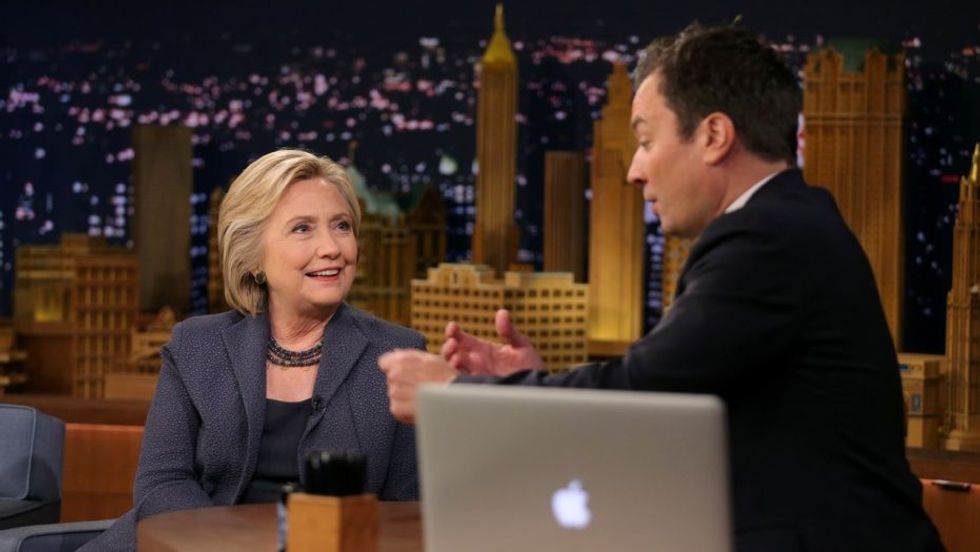 Hillary Clinton had a few choice words critiquing President Donald Trump’s response to the ongoing Puerto Rico crisis, as she shared them yesterday with host Jimmy Fallon on The Tonight Show. She was on the show to discuss her memoir, What Happened, as well as her children’s book, It Takes a Village.

Clinton talked about life after the election, and Fallon asked if she would have felt different had her opponent, who would later become president, been anyone else other than Trump. While still anticipating feelings of disappointment, she said she wouldn't have worried for the country as she does now.

“I’ve thought about that a lot,” Clinton said. “If I had lost to another Republican — somebody who I disagreed with, but who I thought was temperamentally capable of being president, who would take the job, and the awesome responsibility seriously — of course I'd be disappointed, but I wouldn’t be so worried about my country and the world as I am now.”

Regarding Trump and his administration’s response to Puerto Rico, Clinton mentioned a tweet she had posted a week and a half ago on September 24, four days after Hurricane Maria made landfall in Puerto Rico, which urgently advised that the administration provide immediate aid by sending naval ships to the island: “President Trump, Sec. Mattis, and DOD should send the Navy, including the USNS Comfort, to Puerto Rico now. These are American citizens.”

President Trump, Sec. Mattis, and DOD should send the Navy, including the USNS Comfort, to Puerto Rico now. These a… https://t.co/r0S8ROhWj0
— Hillary Clinton (@Hillary Clinton) 1506269090.0

At the time of her tweet, Trump was still busy persecuting kneeling NFL players on Twitter, and his administration’s response had been slow and stingy compared to its responses to Houston and Florida after Hurricanes Harvey and Irma.

What are the priorities if 3.5 million Americans — and Puerto Ricans are Americans, let’s make sure people remember that — if they aren’t the highest priority of your government in responding to such a terrible natural disaster. What are you people spending your time doing? Golfing? Tweeting? Watching cable TV? I mean, find some time to tell the Navy to get down there and rescue people and provide food and provisions and medical care."

Last weekend, Clinton retweeted San Juan Mayor Carmen Yulin Cruz’s tweet imploring that the focus in Puerto Rico should be on saving lives, which followed her own Twitter-spat with our president.

Clinton's criticism of Trump's actions extends beyond Puerto Rico. In that same conversation with Fallon, she mentioned that one of the first things Trump did as president was reverse President Obama's order that people with serious mental health problems should not be able to buy guns.

Two weeks ago Clinton appeared on the Late Show with host Stephen Colbert, at which time she shared her thoughts on Trump's recent speech at the U.N. regarding North Korea. In that speech Trump said, “The United States has great strength and patience, but if it is forced to defend itself or its allies, we will have no choice but to totally destroy North Korea.”

“I thought it was very dark, dangerous, not the kind of message that the leader of the greatest nation in the world should be delivering,” she said. “You are both required to stand up for the values of what we believe in — democracy and opportunity — as a way to demonstrate clearly the United States remains the beacon that we want it to be. While, of course, when you face dangerous situations, like what is happening in North Korea, to make it clear your first approach should always be diplomatic.”